FIVE green vests in the top 20 meant a great finish to the Sunday XC season. Men’s captain JAMIE SMITH reports on Roadrunners’ challenge for the title…

THERE was a fantastic turn-out of Roadrunners at today’s final Thames Valley Cross Country League fixture of the season. What a way to start the New Year, with a distinct difference from the wet and muddy conditions we have had to endure so far this season.

It was a lovely spring day with a slight chill, but it was dry and sometimes we enjoyed a glimpse of sunshine breaking through.

All of this would suggest an easier day, but in reality Bracknell Forest Runners laid out a truly testing course.

Taking place on the heathland around Lightwater Country Park, with gorse that seemed to reach out and grab at you, there were plenty of bloodied arms showing afterwards.

With a fair amount of dry conditions underfoot this allowed for a faster pace than we have had to get used to when ploughing through the mud.

I would probably describe the course as never actually being flat, and none more so then on the long hill we had to run twice.

How would we rank the hills from this season? Sandhurst, Handy Cross or today’s… which was hardest?

But there were — as should be included on all cross-country courses — a few technical muddy sections that allowed all of us to get a good covering of mud over our legs.

With the results still currently provisional, it looks as though our men were overall joint first on the day, with Windle Valley.

I’d like to thank everyone who has turned out for us this season. Everyone who runs plays a part in any team success — so well done all!

We were led home with another fine run from Jack Gregory in second place. Like all the top runners he had to survive a confused start, caused by a marshal not being in position and a lack of signage. 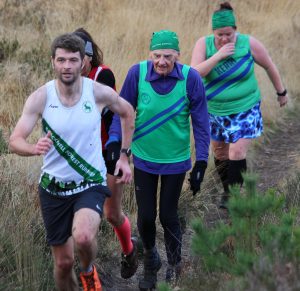 This brought the front of the field to a virtual standstill, only resolved when Bracknell’s Neil Kevern , the eventual winner, took the initiative to find the correct course. A potential disaster was averted but Jack had to work his way back past about 20 runners.

That’s Neil in our picture, battling it out with Tom Harrison and Kerri French.

Special thanks to Lance and Brian for turning out for this fixture after a last minute call to arms on Friday evening! Their performances were crucial in clinching top spot for the men’s team on the day and for the season.

So that’s the end of the TVXC for this season, but don’t worry there is still plenty of mud to be found if you feel you need some more.

Next Saturday we have the penultimate Hampshire League fixture and following that Popham Airfield stages the last races on February 8th.

It was great to see such a good turn-out of women for the last fixture of the season — I counted 25! 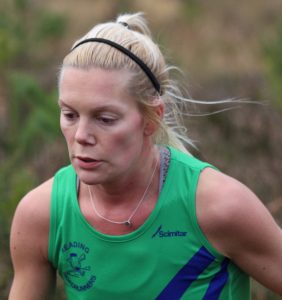 With last year’s race having been cancelled due to snow, and some of us not having run it many times, there seemed to be various memories of the course, but commonly mentioned were hills, bottlenecks, a ditch, and a lack of desire to run the second lap. Yep, they were all still there.

Laura Peatey was next, in 11th, with Mel Shaw hot on her heels in 12th. There followed a couple more seniors — Chloe Lloyd in 26th, and Renée Whalley in 29th — but it was our first vet, Claire Marks, who would complete the scoring team, in 30th. 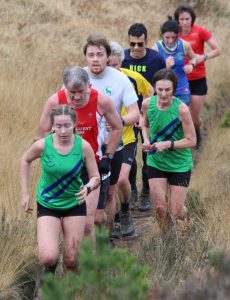 Their efforts gave us second place on the day, and this seemed to me to be a fantastic end to the TVXC season. Well done to everyone who ran, especially those who were new to the club or to XC this year, and have embraced the mud.

You have earned our ladies a final League position of fourth for the season.

If you’re wondering what you can do with yourself now, we still have two Hampshire League fixtures to go, in Reading (Prospect Park), on Saturday, and at Popham Airfield near Basingstoke on February 8th.

You can also take a look at the email you should have received this week, with details of upcoming road relays. Let’s keep this team spirit up!