After Roadrunners hosted a fantastically successful Thames Valley Cross Country League fixture, ladies’ stand-in skipper MELANIE SHAW has filed this report on what she has dubbed ‘Ar-mud-geddon’. Supplementary reporting by men’s captain JAMIE SMITH after his six-and-a-half-hours shift from set-up to leading the team and unpacking the vans..

FOLLOWING last weekend’s Berkshire Cross Country Championships and seven days of rain of biblical proportions at Ashenbury Park, the mud and water levels on the Woodley course had increased significantly, reducing it to a sea of treacle. Just what we wanted! 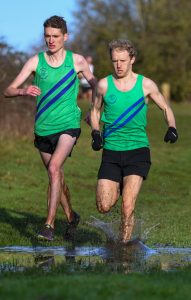 The latest leg-sapping course welcomed a fantastic 416 runners — including 77 Roadrunners — to celebrate the final Thames Valley XC League run of 2019, and surely the beginning of the festive season.

There were Christmas hats aplenty and the lovely Eddie Thorpe even donned his fabulous festive running gear. (Fear not, he ran in the required club vest for the race).

The mood was buoyant — and needed to be given the conditions — and everyone seemed to enjoy the atmosphere of a great event.

Jack Gregory and Rob Corney — back after eight weeks out with an Achilles injury — led the field out and the spray from the runners was akin to travelling under a waterfall. The race was gruelling, and it was more effort pulling your foot out of the mud than placing it in front of the other one. We suffered two tough laps (of 4km each) before the final placings were decided.

Despite it being his first appearance of the season, our second-claimer Ben Paviour (left) was the first vet home in fourth place, just ahead of Sibrand Rinzema, whose impressive sprint finish gave Roadrunners four out of the first five places.

If that wasn’t enough, we proudly welcomed Mark Apsey in ninth and another vet, Tony Page, in 20th, giving the club’s men a massive winning margin. With Chris Burt 13th and Jamie Smith 14th, we had nine finishers in the top 20.

I had the honour of leading our ladies team — with Laura Peatey, Jane Davies and Chloe Lloyd our other scorers — into third place. This gave the club joint first place overall, along with Datchet, after one of the Dashers’ scorers was disqualified for wearing headphones.

Sam Whalley was really pleased with the team result and wanted to give a shout-out to several other members… “Sarah Dooley was our fifth woman home, in the middle of her 14 mile long run — good going! Shweta Saikumar, who, having said just last week that she would not be back, was indeed back, and had a great run. She really will feel the benefit in the spring. Swinda Falkena’s big smile was back at Ashenbury for the second time, with Swinda claiming to have enjoyed the race much more, with the benefit of last week’s experience. 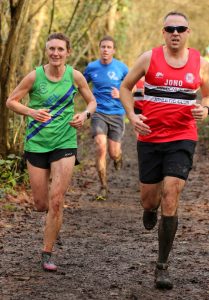 “It was great to see Annette Russell racing, after a difficult year, and Helen Wing, who had sworn never to do XC again, was a true professional in her XC spikes. Katie Rennie was back in green for this league only (at least for this year!), which was lovely to see.”

So, a big thank-you to Sam, Peter Reilly and all the wonderful volunteers who made this possible — from the course set up, the catering, photographers, results takers and the well-wishers. You really made our club proud!

Finally, congratulations to all the runners who managed to navigate themselves around the course. This event was a real show of club depth, with so many Reading Roadrunners running and/or volunteering.

Today was the final race of the year as a club and we can look forward to 2020 with a great deal of optimism. 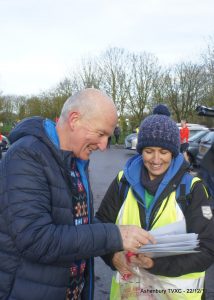 The next XC event is the TVXC fixture at Lightwater Country Park on January 5th. Let’s start the New Year with another mass green vest race takeover!

That will be followed by the Hampshire League fixture at Prospect Park, Reading, on January 11th.

Have a wonderful Christmas all.