CLIMBING was the theme of this weekend’s racing for Reading Roadrunners. The dreaded ascent up to the mansion house in Prospect Park was the big feature of Saturday’s Hampshire Cross Country League fixture and that was followed today by the killer 3k drag up to the finish of the Woodcote 10k and the iconic remake of The 39 Steps at the Cliveden 10k. Club captains SAM WHALLEY and JAMIE SMITH have again filed accounts of the cross-country action and their reports follow my own missive from Woodcote…

QUIZ question: Who has been the most successful Reading Roadrunner over the last year? 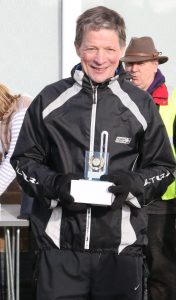 As Ed climbed the podium to collect his customary M60 prize after the Woodcote 10k he said: “I’ve been very lucky. In the last 19 races I’ve entered I have had two second places and 17 wins.”

1 There was no team prize. Had there been one, our four guys in the top 18 — Chris Lucas third, Brian Kirsopp ninth, Fergal Donnelly 17th and Tony Page 18th — would have walked away with it. No other club had more than one athlete in the top 20.

2 First lady home was our second-claimer Ellie Gosling. Unfortunately she was wearing the wrong kit!

3 No prize for Sarah Dooley for winning the W40 group… they handed it to someone else by mistake! Was coach Sarah miffed? Just a bit!

4 And no M70 prize for yours truly. There wasn’t one! Pity, the day had been going OK right up until the time I head-butted the pavement.

But there were still trophies for Dodwell, Jane Davies (F60 prize in her second tough race in less than 24 hours) and Lucas, a winner of this race in 2018 but a bronze-medallist this time after being run out of it in the last 400 metres. 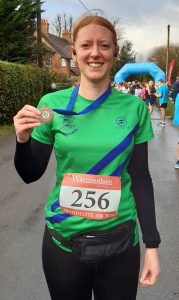 Amazingly, three Roadrunners chalked up PBs on this tough course. On his comeback from injury, Tony Page managed an improvement of 28 seconds, George Nyamie progressed by 25 seconds and new member Julie Sugden (right), donning a green vest for the first time, found it made her over a minute quicker.

Brian Kirsopp, a winner last year, had to settle for second place in the V50s but my spies tell me that the man who beat him, David Parton, may soon be racing in a green vest.

There were 29 Roadrunners contesting the Woodcote event and 22 competing at Cliveden, where Ian Giggs was our first finisher and Elizabeth Ganpatsingh our first lady home.

With this being our second visit to Prospect Park this season, the BBO XC Champs having been held here in November, there were to be no surprises in store. 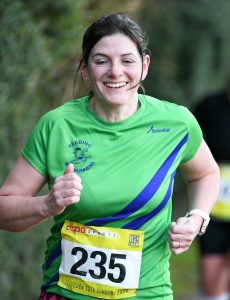 The course, though, felt markedly different. I heard the mud described as soft, sticky, claggy… it was certainly deeper in places, especially on the hills and through the woods, and the boggy end of the field was indeed boggy. The course was, as usual, short, at 5k, and we continue to be baffled as to why we don’t run an extra loop that the men run, to increase the distance to nearer the advertised 6k. 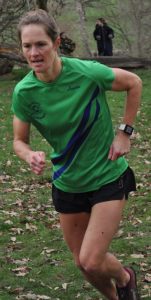 Regular TVXC winner Freya Martin was once again first for the team, in an impressive 13th, followed by Hannah Green, making her debut for the club, in an excellent 37th. Helen Pool completed the team, in 44th (8th vet), and the team placed a fantastic fifth.

Mel Shaw, not really feeling the love for this league after a few years away from it, was hot on Helen’s heels in 46th, while Jane Davies did battle with a Reading AC rival for 52nd (11th vet, first V60), during what she called her warm-up for the Woodcote 10k.

Chloe Lloyd continued her great run of form not far behind in 62nd, and our other Hampshire League debutante, Emma Paton, completed the vets’ scoring team in 73rd (24th vet). The vets team was a brilliant third.

Also having strong non-scoring runs on the day were Sam Whalley (that’s me!), Alex Bennell, Claire Seymour and Cecilia Csemiczky, with Cecilia just being pipped by her arch-rival from the Victory running club.

Well done to everyone who ran, and thank you to those who came out to support, mostly on the worst hill — what a motivator!

With one fixture to go, the women’s team overall is sixth on aggregate, while the vets are third, just one point ahead of Stubbington Green. We had a team of 11 at this race; It would be great to have an even bigger turn-out for the finale at Popham Airfield on February 8th. If you’re free, join us!

And here’s JAMIE SMITH’S report on the men’s race at Prospect Park:

Having run the same course in December at the BBO, everyone was well aware of all of the hills and, indeed, once again the mud that was to come. 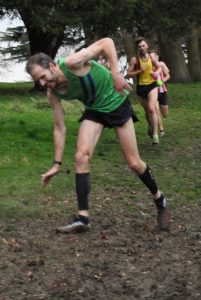 Speaking with lots of the new faces, there was a mixture of excitement and nervousness pre-race. The Hampshire League is seen to be a step up in class from the TVXC, and one that really should not be there. This was best summed up after the race by first-timer Daniel Rickett: “Really enjoyed that” he said. “If I can do it anyone can!”

Unfortunately, having picked up a few niggles in the recent TVXC event and with the depth to the team these days I had the chance to watch the race from the sidelines. It was thoroughly impressive to see the commitment and enthusiasm from all who wore the green vest yesterday.

At the front of the race there were plenty of top-level runners, including recent TVXC  winner Jack Gregory, who led the team home with his highest-ever finish of tenth. Jack has set himself a number of goals for this year and a top-10 finish in the Hampshire was one of those. One down, three to go!

Finishing in a fine 23rd was Ben Paviour, who was making his debut this season. Ben was second vet40 to finish after a run that was nearly perfect apart from an unfortunate stumble on one of the downhills.

Behind our leading pair the scoring team was made up by Mark Worringham in 33rd (fifth vet), Mark Apsey in 37th and this season’s cross-country ever-present Chris Burt in 57th.

This led to the senior team finishing in a fine sixth place, cementing our current sixth place in Division One for this season.

With one race to go our men’s vets team have all but secured the league title. They won the fixture yesterday thanks to a fine run from Andrew Smith, completing the team as 15th vet 40. 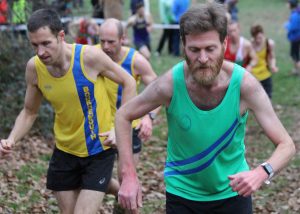 Congratulations to those who have scored and made this league win possible. Beating the Aldershot team is no mean feat.

In the men’s vets individual competition, we have an exciting conclusion to the season with mud-lover Mark Worringham currently in fourth place only one point away from third ahead of the final race at Popham airfield on February 8th.

Thanks to everyone who turned out on a cold and very windy day. Let’s be seeing some more of you, either at Popham or next season!