AFTER another busy weekend of cross-country action, ladies captain Sam Whalley wraps up all the Roadrunners’ news from at home and abroad…

As if standing around volunteering at a local parkrun in the cold wasn’t enough, 24 Reading Roadrunners made the journey, through driving rain, to Winchester, for the second Hampshire League fixture of the season.

Sparsholt College was a new venue, and promised grassy fields and woodland. I don’t believe anyone had mentioned hills, although these were to be expected, or steps. Steps? Even the flat bits looked to me like they were on a camber. And of course there was mud, plenty of it. Even heading to the area allocated for club tents was pretty slippery, and one of two may have taken a tumble. 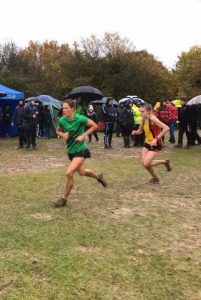 Having been ill on the Friday, I was delighted to see such an impressive turn-out of women, which meant I didn’t feel obliged to complete the team. However, I was slightly disappointed to not have been able to experience the ‘brutal’, ‘horrible’, ‘horrendous’ conditions first hand, because that’s what it’s all about, after all. I can certainly confirm that I was wet and very cold, and almost as muddy as if I had run.

First back of our nine women was new second-claim member, Freya Martin, who runs first-claim for Tadley Runners. Although she didn’t feel she had run as well as she would have liked, Freya (right) was a real asset to the team, in 23rd position, which is excellent for a race of this standard.

Alex Bennell and Claire Seymour put in really strong performances, as did triathlete Kira Moffat, making her debut in the Hampshire League (coerced by friend of ten years, Claire Raynor, who hoped this baptism of fire — well, water really — wouldn’t signal the end of their friendship), and Cecilia Csemiczky, who had run the Nice-Cannes marathon only a week before. She kept that quiet!

We will be missing Katie Rennie this season, having switched her first and second-claim status in order to secure a London Marathon place through the University of Southampton; we cheered her on regardless, and hope to see her back with us next year. 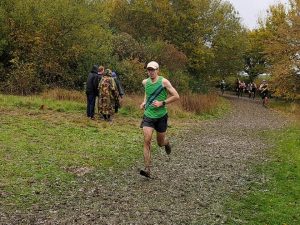 Fourteen men made up the men’s team, in a race which was of an incredibly high standard. There were comments from some that they felt that their finishing position was not representative of the effort they had put in, such was the tight packing of teams such as Aldershot, Farnham and District, with over 30 runners in total, including six in the top ten, out of 298 men.

First to finish was Jack Gregory, in 34th, followed by Mark Worringham, in 60th (4th vet, above), Mark Apsey, in 63rd, Jamie Smith (68th) and Brendan Morris (74th). This meant the men’s team was fifth, which was a fantastic result.

Chris Burt (below) was next, in 86th, with Tony Page (105th, 13th vet) and Lance Nortcliff (115th, 18th vet) completing the vets’ team. The vets’ team was first, again, which was absolutely brilliant. 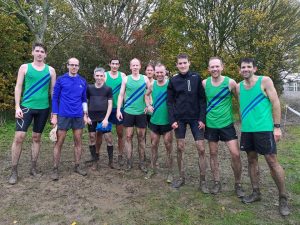 There were also gutsy performances by Matt Davies, still feeling his recent marathon in his legs, Pete Jewell, Andrew Smith, who handed me his finish token from a very muddy, bloody, hand, and Mark Andrew, an infrequent participant in the Hampshire League, but who can definitely hold his own in this field. Colin Cottell opted not to finish the race. Despite the conditions, which, it was pointed out, were almost identical to those in Aldershot on the same weekend last year, this was an incredible day for the club, and everyone gave it their absolute best. The next race will actually be in Aldershot on November 30th.

The weather was somewhat different on Sunday, for the third Thames Valley XC fixture of the season, hosted by Datchet Dashers, where 65 Reading Roadrunners were in action. I always give this race a miss — three feet of elevation, what’s that about? — and had volunteered for admin. It’s a great way to put faces to names, and you get a real feel for everyone’s race. 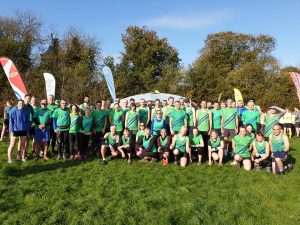 Not put off by Saturday’s experience, Chris Burt had a strong run on a very different course, and led the club home, in ninth place. This position alone shows the calibre of the previous day’s race! He was followed in by vets Fergal Donnelly, in 23rd, Tony Page, also still not tired from the Hampshire League, in 35th, Andy Blenkinsop (43rd), Brian Kirsopp (47th) and Darren Lewis (49th). That was enough to earn us fifth place.

Matt Davies was another who did the XC double this weekend, while Stuart Hyslop and Mike Hibberd made their debuts.

There’s no stopping Sarah Dooley at the moment, and she was first of our woman (and vet woman) to finish, in 31st, even after a bout of Hampshire League fun 24 hours earlier. Claire Marks was next, as second vet, in 33rd, with Renée Whalley in 34th. Chloe Lloyd had also ‘done the double’, and she was 45th. That put our ladies in sixth place and the club also sixth overall. 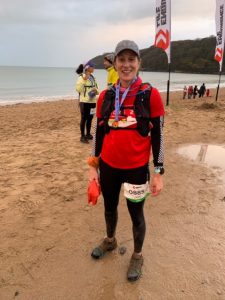 There was great running by everyone, and we look forward to the next race, hosted by Sandhurst Joggers, on November 24th.

While the two XC leagues provided some challenging conditions, the prize for the toughest task of the weekend should probably go to first-time marathoner Nicki Randall, (left), who conquered the 27.5-miles Endurance Life trail race on the Gower peninsula in west Wales.

Total elevation gain in the event was 3,115 feet which, as Nicki points out, is nearly the height of Mount Snowdon. At the start it was “lashing it down and really windy.” Nevertheless her finishing time of seven hours and six minutes was good enough to win her F55 age group!

“Thankfully the rain eased as we made our first climb from the beach up to the moor,” said Nicki. “Then the trail got muddy… proper serious mud that sticks to your shoes.” 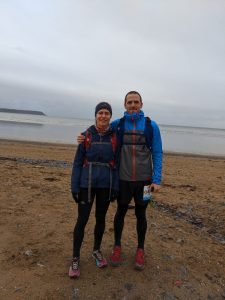 After another couple of tough climbs, a run along another beach, a coastal path, lots of undulations and more mud, our hero in green and her husband Martin finally made it through the line.

“That was my first marathon,” she said, “but it probably won’t be my last. In fact I will probably go longer now. I love trail running, it’s such a lovely way to see the countryside.

“These events are so friendly and inclusive and there’s a mobile buffet at the checkpoints.”

Another brave Roadrunner competing on the Gower coast was Maddy Smith, who described the 14.8-mile half marathon as “definitely the hardest race I’ve ever done.”

Maddy (pictured right with boyfriend Dan) finished in a time of 2:56.39 and was 34th female. “It was the first trail half marathon I’ve ever done,” she said, “and the furthest I’ve ever run.

“Luckily it stopped raining for about three hours for our race and the sun came out to allow some stunning views. I’m feeling incredibly sore now but it was a great experience.” 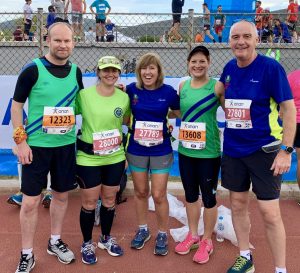 Conditions were a lot better in Athens, where the great and the good of the local running scene gathered to celebrate the 100th marathon run by Roadrunners” second-claimer Mary Wilson.

A veteran of nearly 200 volunteering stints at local parkruns, Mary has also competed in marathons in the United States, Thailand and Spain.

Phil described the run as “one event too many for Christina and me. It was a “long and painful slog on a very hilly course.”

Nevertheless Christina survived to finish her second marathon in a month just after completing the Grand Slam in the Centurion 100-mile series.