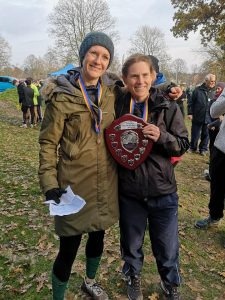 Mel Shaw, Helen Pool and Sarah Dooley were fifth, seventh and ninth in the over 35s competition, which put them level on points with Newbury AC, so it was the position of the third scorer which determined the outcome at Prospect Park.

The senior women’s A team of Chantal Percival, Laura Peatey and Mel Shaw was sixth. Laura seemed to have been unhindered by her lack of running spikes on such a muddy and hilly course, and Chantal commented that she had forgotten what these short races are like, especially with the advertised 6k actually measuring under 5k.

It’s not really far enough for some of our long-distance runners to get into their stride, so perhaps next year’s race, which has been equalised with the men’s, and will be 8k, will suit the team better. 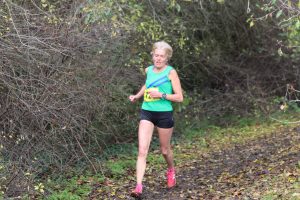 Jane Davies (left) was 12th vet, which is fantastic considering she had hot-footed it down from Liverpool, where she had been third FV60 and in the winning England FV60s team in the British and Irish Masters XC International the previous day.

Jane remarked that the course at Prospect Park was certainly more interesting than the outer laps of Aintree racecourse.

In the men’s (slightly less than) 10k race, Jack Gregory (below) led the senior team to third place, with an individual third placing of his own. Jack said that he had been racing the winner, Alex Muir from Newbury AC, since he was a child, so knew what he was up against, but had enjoyed the battle the top three had fought throughout the race.

With six to score in the senior men’s race, Jack was backed up by Seb Briggs, Brendan Morris, Sibrand Rinzema, Jamie Smith and Chris Burt. 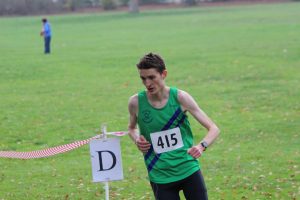 Seb also took home the medal for third vet overall, and led the vets team to second place, with Jamie Smith and Tony Page completing the over 35s team. It’s worth mentioning that Jamie had run a half-marathon PB at Dorney Lake 24 hours before.

Not in the scoring team, but also having strong runs for the men, were Lance Nortcliff, Pete Jewell, Andy Blenkinsop, Richard Usher — running his first BBO race for 20 years — and Ian Giggs.

This was an amazing performance for the club, and the effort put in by everyone is very much appreciated.

Far away from the mud and chill of Prospect Park, there were Roadrunners who found it too hot to produce times they were happy with.

The usual suspects of Paul Monaghan, Caroline Jackson, Pete Morris and Martin Bush were in Cyprus for the Larnaca Marathon, from where there were any number of excuses. 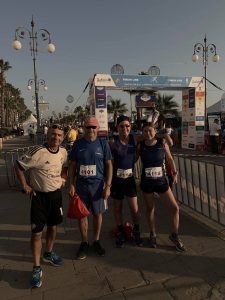 The race was run in 28-degree temperatures… there was a 1k kids race on the course at the same time forcing the marathon finishers to dodge 400 little ‘uns… and Pete Morris’s race was disrupted by the need to stop to feed pelicans. No, we’re not making that up. So, do Roadrunners back home feel sorry for them competing in that heat?

“Caroline and I ran rubbish times at about 4:40,” said Paul. “I was moaning about my dodgy calf injury and Caroline was suffering heat problems so we nearly pulled out at half way.

Next weekend the intrepid foursome will be heading to San Sebastian on Spain for yet another marathon and Paul said: “At least Morris shouldn’t have any pelicans to worry about this time.”

In rather cooler climes, there was a PB of over two minutes for David Clay at the Gosport Half Marathon where he finished in 1:31.32. “Coming after terrible runs at Maidenhead and Berlin this autumn it was a welcome confidence boost to run well,” said David. 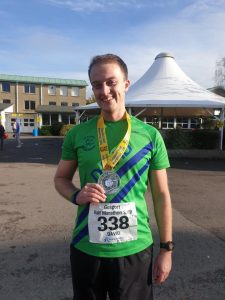 It was Jim’s 17th appearance in the event and he finished fourth M70. “It was a bit fresh when we arrived,” said Jim, “but this is a very well organised race. It’s definitely an acquired taste, but very addictive.”