THE unique Marlow 7 was the place to be if you wanted to pick up some bling this weekend.

Three of our amazing veterans — Ed Dodwell (M60), David Dibben (M70) and Carrie Hoskins (F50) — picked up prizes at this reportedly well-organised, value-for-money race, although for Carrie it was the trophy for second female overall. 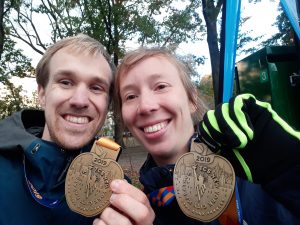 Rita Dykes was unlucky not to get the F70 prize. She was quickest in her age group by 22 seconds but she lost out because it was awarded on the ‘gun’ rather than ‘chip’ time.

David said: “Last year in this race I was pleased to knock three mins off the course record for an M70, previously held by the great Jim Kiddie.

“Today I knocked another three and a half minutes off that. My wife Jill improved her personal best at this distance by 72 seconds and was over four minutes quicker than this race last year.” First Roadrunner to finish was Fergal Donnelly, following his excellent form throughout an autumn of tough trail races and half marathons. Just goes to show how good off-road training is for your overall performance! 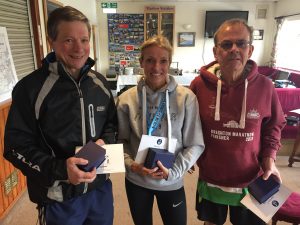 In the Marlow half marathon, Richard Usher was first RR back, in 1:32.06, while Katie Gumbrell brought it home for the women, in 2:12.25. This is a tough course!

The prize for the Roadrunner taking part in the toughest race of the weekend went to Gary Tuttle in the Mission Mount Somers Half Marathon in the south island of New Zealand.

The clue is in the title… ‘Mount’. This is basically a trail race up a volcano. The degree of difficulty can be gauged by the winner’s time, 2:06, and the final finisher’s.. over SEVEN hours. In the full marathon staged simultaneously, the winner ran 4:13 and last man over TEN hours.

Gary (right) finished 16th in the Half in 2:44.59 just a fortnight after his sub-3hr PB marathon in Auckland. “No PBs here,” he said. Never mind, that should toughen him up for a spot of XC action when he returns to the UK.

Meanwhile, over in the United States, Roadrunners’ Dutch star Swinda Falkena was celebrating a 10-minute PB in the notoriously tough New York City marathon. Swinda ran 3:47.38 and her boyfriend, Sibrand Rinzema (top picture), was the first Roadrunner to finish in an impressive 2:51.56.

“It was a tough course,” said Sibrand, “but I really enjoyed the ambience. It was good until 25k, on a pace for 2.35 but I had a hunger knock and needed to walk/run after 32k.

“Swinda really enjoyed it as well, and didn’t even think the bridges were too bad. The final part in Manhattan just slightly uphill was tough, but she managed to not slow down too much.”

Like Sibrand, David McCoy also managed a sub-3hr time, finishing in Central Park in 2:58.35, but it wasn’t such a great day for the veteran marathoner Dave Wood, who struggled round in 5:42.05. “That was horrible,” said Dave. “Having been injured throughout the summer and only doing three training runs I got what I deserved.”