STAND-OUT Roadrunners’ performance of another hectic weekend of racing was a personal best of two hours 30mins 59secs by Mark Worringham at the Frankfurt Marathon.

“The hope was to get under 2:30 and then retire from competitive marathoning, so it looks like I will have to keep going. 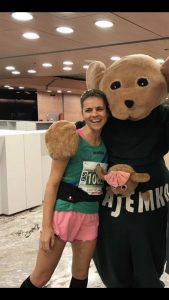 “The last two miles must have been slow as hell, but at least I kept running, if it can be called that.”

Another Roadrunner racing abroad to finish a marathon with slightly mixed feelings was Magda Bennett, who ran 3hrs 45mins in the Slovenian capital, Ljubljana.

Despite chopping seven minutes off her time on the same course four years ago, Magda had been hoping for something a little quicker.

“There was no way the body could move at 8-min miling at this stage. So, I felt it was game over. The heat was a struggle and I couldn’t take on enough water. It was the usual battle of will-power to get to the finish. And at the finish I couldn’t move another step.

“It’s a great course, but the cobbled street at mile 25 was cruel. Still it was a good for age and I was 11th in my age group, so I’m not disappointed.” 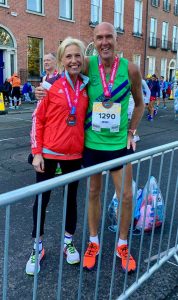 Once again Katherine Sargeant was in top form on the road, following up her superb time in Moscow last month with a PB in the Dublin Marathon. The Roadrunners coach ran 3:03:58 for what turned out to be another win in her age category and an improvement of 52 seconds on her time in London in April.

Katherine was originally placed second in the FV50s but the local girl provisionally awarded the prize was actually born in 1986!

Also celebrating with her again was Tony Streams, whose time of 3:19:08 was another new PB — by seven seconds.

Biggest PB among the Roadrunners athletes in Dublin was by Angela Burley, whose time of 3:46:02 was over 12 minutes better than her performance at this year’s VLM. There were also PBs for Carmen Fuentes-Vilchez, dipping just under four hours for the first time, and Calum Baugh with an impressive 3:16:10.

There was also a group of Roadrunners competing in Belgium (below), and the highlight of their trip was a second lady finish and PB by Helen Pool in the Ghent Half Marathon.

Despite this being her third ‘half’ in the space of four weeks, Helen won her age group by over seven minutes with a time of 1:32:02, an improvement by more than two and a half minutes. 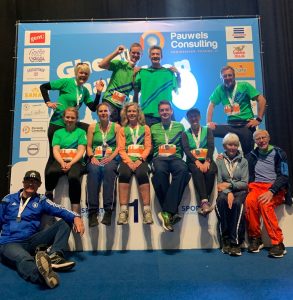 The weekend’s action had been kicked off on Saturday by the No.1 marathoner himself, Martin Bush, who completed his 1,059th race over the classic 26.2 miles distance at Beachy Head on Saturday.

Always a tough race, this one was run in foul conditions with a lot of rain and mud, and Bushy suffered a heavy fall.

It didn’t stop the great man finishing the course (time not yet confirmed) and it certainly won’t stop him running marathon No.1,060 at the iconic Cannes-Nice event next weekend.

Back closer to home yesterday, the 11th round of the club championship, the Rickmansworth 10, resulted in a gun-to-tape win for late entry David McCoy (below) in a superb time of 57mins 55secs. And, while the rest of the field were racing it out, the cheery Ulsterman confessed he was using the race as a training run for next weekend’s New York Marathon.

McCoy had already sewn up the senior men’s title in the club championship and yesterday’s fourth-place finisher, Chris Burt, has now secured the runners-up spot. Chris had to be satisfied with a PB of five minutes!

Another Roadrunner to achieve a personal best was 13th-place finisher Tony Page, and by doing so he pretty much cornered the market in PBs recently.

Since the start of September Tony has run PBs in the Swallowfield 10k, the Basingstoke Half Marathon, the Abingdon Marathon and now at 10 miles. Oh, and he threw in a parkrun PB for good measure.

Tony of course picked up 50 club champs points and Bryan Curtayne 49 to keep their positions at the top of the M40 group, with Chris Manton collecting 48. However, it was Clive Bate’s 47, which added an extra 11 points to his total, that now sees him in third place, with 192.

The men in the vet 50s category have been battling it out all year. David Fiddes’s 50 points took him to 196, but David Caswell’s 49 have seen him propelled to 198, and joint first in the table with Brian Kirsopp. Gary Clarke picked up 47 points.

The vet 60 men’s category remains unchanged, with Alan Freer (second in his age category for the race), and Joe Blair collecting their respective 50 and 49 points.

The vet 70 men’s category is now concluded, with David Dibben, who was first in his age category, adding a final 50 points to complete his wins at every race distance, and leaving Jim Kiddie in second.

First home among our ladies was Chantal Percival, who was third in the women’s race and confirmed afterwards that she will be available for the RR squad for the rest of the Hampshire Cross Country League season.

Today’s race had only vet 40 women contesting positions in their category. Suzanne Bate’s 50 points took her up to third in the table, while Gill Manton’s 49 saw her jump a few places, up to fifth.

The club champs roadshow culminates with the final fixture, the Mapledurham 10, on December 1st. This race incorporates the climb of the dreaded ‘Tourette’s Hill’, so good luck with that!