ON a day of many terrific Reading Roadrunners performances perhaps the stand-out was Alex Harris’s personal best of nearly seven minutes on his England debut in the age group masters international run in conjunction with the Yorkshire Marathon.

Alex ran 2hrs 49mins for fifth place in the M50 age group and ninth overall. “It was a tougher course than expected,” he said, “and windy. The race got really spread out so I ran the whole way pretty much alone.

“I struggled with a cramping thigh for the second half but I dug in well until mile 24, and then faded. I thought I was really tight on getting under 2.50 after limping up the last hill so I sprinted as hard as I could and ended up with 2:49. Very happy with that.”

Alex got a shock near the 20-mile mark when a green vest whizzed past him. It was our new Mortimer 10k champ, Marcus Fletcher, on his way to a PB of 2:47.43

For Alex the run completed an autumn triple whammy. He shaved three seconds off his PB at last month’s Maidenhead Half Marathon and his time at York looks as though it put the club’s M50 marathon championship title to bed.

Although she missed a PB by barely one minute, even starting the race represented a triumph in itself after she struggled to overcome a foot injury.

Only getting the all-clear to run after a late scan and extra physiotherapy, Carrie was nevertheless eighth lady overall, with 2:57.56, and second in her F50 age category.

“It was hillier than I thought,” she said, “and I spent an awful lot of time running on my own. The wind was in my face for most of the run. But I’m over the moon about going under three hours again.” 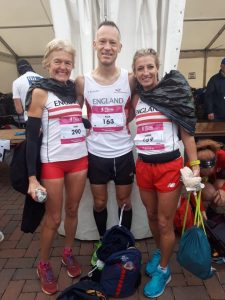 The big marathon Sunday had kicked off with Gary Tuttle’s success in New Zealand. With a 12-hour time difference and a 6am start, Gary had finished before most of us woke up.

Less than 20 hours after a monster flight across the world he ran 2hrs 55mins 32secs in Auckland, an improvement of nearly four minutes.

Gary’s previous race in New Zealand was over a little matter of 234k and involved cycling and kayaking, so the marathon was a comparative doddle.

Once again his wife Trinity provided the key ingredient for his superb performance, handing him  a doughnut and Red Bull as he left the Auckland Harbour Bridge at 18km.

“The first half was a bit hilly and I planned to aim for about 1.25-1.30,” said Gary (below). “The second half was flat straight out and back along the coast, so I hoped I could maintain the same pace for that.

“I was running by myself after the first hour. At about 34km I started getting cramp in my calves and hamstrings. I knew I was on for a PB so decided to slow down a bit and stop the cramp from taking hold too much. 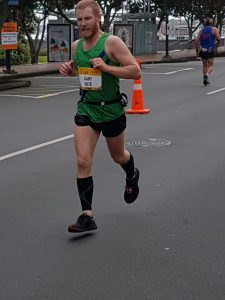 “At this point a few people started passing me and the finish couldn’t come quickly enough.”

The second Roadrunner to PB abroad was Matt Davies, who fought off a bout of ‘man flu’ to finish in 2:47.18 at the Amsterdam Marathon.

That was an improvement of 33 seconds on his time in his sensational marathon debut in Dusseldorf.

“I had a cold all week,” said Matt (below), “and had a terrible shake-out run and was convinced I wasn’t going to race for time.

“This morning my I was feeing better but not great. I got boxed in at the start and had to do some weaving for the first few miles. 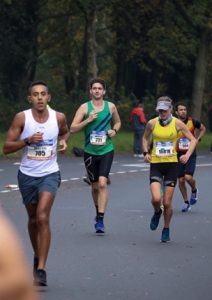 “Through 30k it looked like I could comfortably get 2.45 which was my main goal. That was my plan to build into the race and see how I was  feeing.

“Unfortunately my illness caught up and I tired a bit, then a lot for the last few miles my pace dropped significantly (and it started to hurt). But I had enough time in the bank to still get a small PB.

“I was happy how I executed the race, but I’m left wondering what might have been. I have picked up a few things to adjust going into London next spring and will use this as motivation over the winter that I can still hold it together and get a good result, even when things are against me.”

There were plenty of happy Roadrunners with PBs to celebrate after the Abingdon Marathon, but none happier than Chris Buley (below).

On the course where he unaccountably collapsed late in last year’s race, Chris buried his demons to be first RR home in 2:57.27, his first time under 3hrs and a PB by six minutes. Chris is this year’s Berkshire senior road running champion, and this performance shows why. 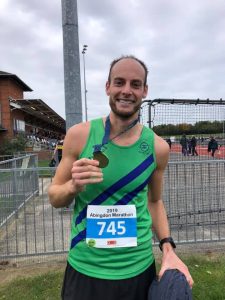 SAM WHALLEY wraps up the best of the rest of the weekend action:

Despite not being in any way involved in the second TVXC fixture, I was looking forward to seeing the results. Not least because I had seen that a few of the people I follow on Strava had done really well, and then seen a few more familiar faces in the photos.

It was definitely looking like it had been a good day for the Reading Roadrunners XC team, with 55 of you turning up (in your shared cars).

Coming in first for our men (and first and second overall) were Matt Richards (below) and TVXC newcomer Sibrand Rinzema. They were followed by Jamie Smith (sixth) and Chris Burt (11th). David Ferguson was next in, but was too young to be included in the scoring team, with two vet 40 males needed to complete it. Cue Darren Lewis (26th) and Fergal Donnelly (30th). Note that if there were any scoring speedy women among this lot their scores would be even lower — what a great start! 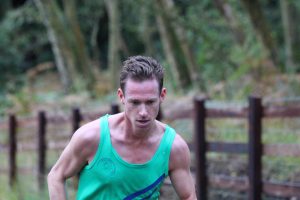 There was an excellent turn-out for the women too. The finish positions I list will be irrelevant to the scoring, as women score separately to the men, but we won’t have that data available until the official results are up.

Mel Shaw led the team in (90th), followed by the only vet 40 needed for the scoring team, Lesley Whiley (174th). Sally Carpenter (179th) and Swinda Falkena (194th) completed the scorers — well done, and thank you!

Elsewhere, there were a fair few Roadrunners in action on the south coast in the Great South Run. I’m not even counting Ben and Manny Whalley, who were third man/dog team in the 2.5k Canine Run in the same location on Saturday.

First RR to finish the 10-mile race was Jack Gregory, who had benefited from a bit of pre- and post-race hospitality by being part of the elite start, and stormed to a new PB of 52.26. A sub-five minute last mile sealed the deal. I saw Jack (below) after the race and mentioned that it looked like a 10k time to me — really impressive, and even more so with young children to have to accommodate around your training. 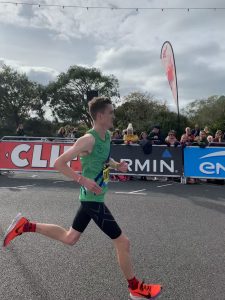 By the way, if you’d noticed Gemma Steel’s number looking particularly on point, you’d have Jack’s support crew Claire Woodhouse to thank for that. Perks of being an elite running WAG, I guess.

There were also PBs for coach Vroni Royle, adding the 10-mile PB to the 10k, half marathon and marathon best times she has achieved this year, and Helen Dixon, who PBd by over four minutes, approximately 40 minutes faster than on the same course last year. No PB for Juliet Fenwick, but surely worth mentioning that she ran the entire race for charity, dressed as a flamingo?

Other notable performances this weekend were achieved by Lance Nortcliff, who was second MV45 in the tough Exmoor Stagger, and Nigel Hoult, who was third MV60 in the Fleet 10k.

THANKS to Claire Woodhouse, Gemma Buley, Peter Reilly and all others who contributed pictures.