The idea of running in two countries during one long weekend was just too good to miss. A flight to Helsinki, Finland, then do a parkrun followed by a boat trip to Tallinn, Estonia to run the Marathon. Caroline Jackson & myself Paul Monaghan did our research and this seemed easily possible. We put the feelers out on Facebook and on website about 6 months before Marathon to see who’d be interested
As per usual we were joined by Pete ‘The Train’ Morris & Martin ‘Bushy’ Bush. Ian ‘IPL’ Giggs, Linda Wright & Kingsley R Stirling who also joined us for this trip. 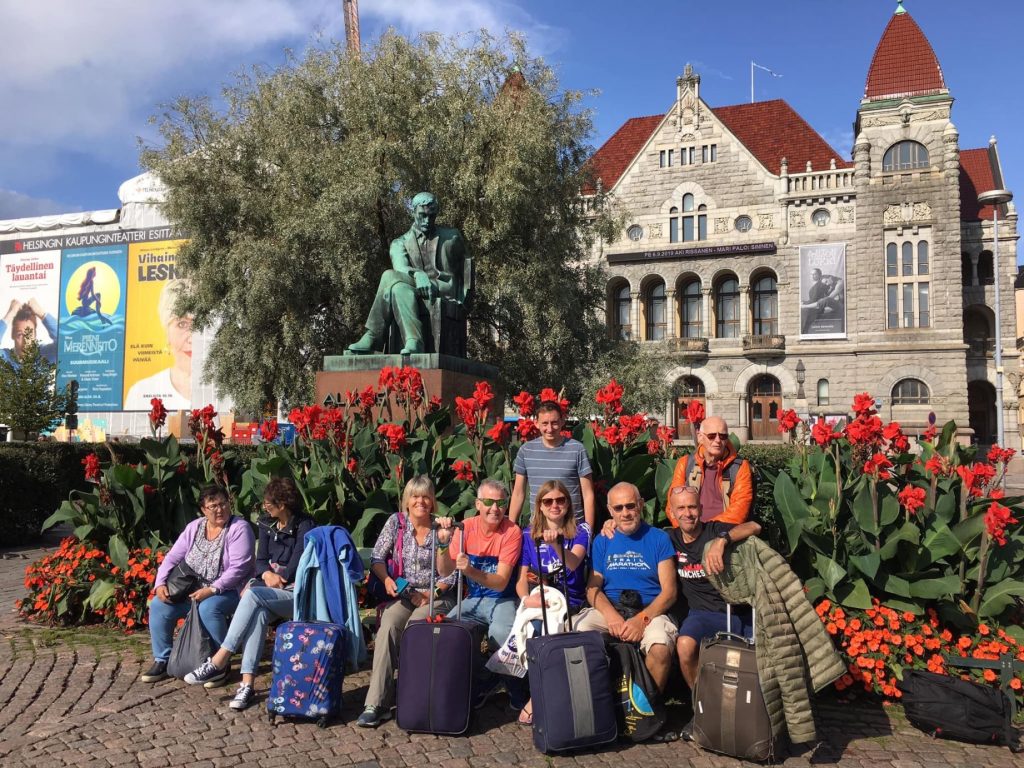 Flight to Helsinki was uneventful and we all checked into our hotels as per usual. A few tourists in Helsinki but not too over the top.

Prices were expensive as we’d predicted but transport was relatively cheap. So after some sightseeing (Helsinki Cathedral was stunning) we took a short boat trip on spec to a small island called Suomenlinna without a clue in the world what was there. 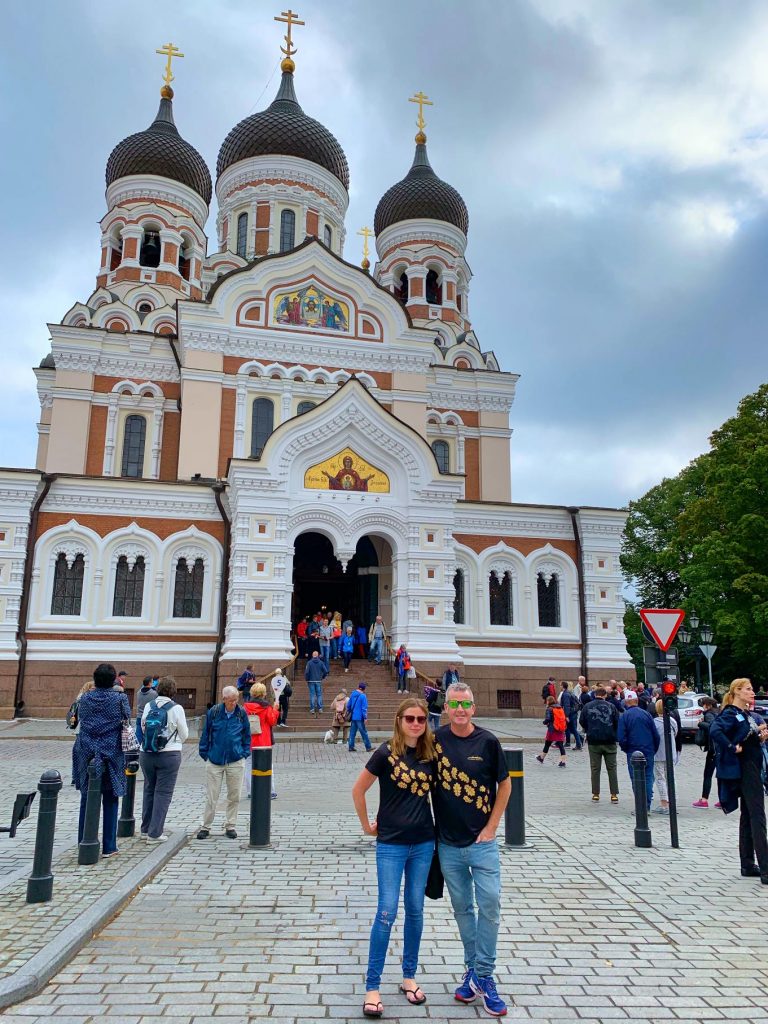 The island is basically an 18th century sea fortress. Many soldiers were walking around the island on parade which was quite amusing. Anyway we spotted an old brewery which seemed vaguely interesting so we decided to visit and sample the goods. It was here we read on our phones the devastating news ‘Tokoinranta, Helsinki parkrun cancelled’ to say we were devastated was an understatement. The other closest parkrun was over 100 miles away but we had to catch a boat at 1:30 to follow. We decided it wasn’t worth the risk so we’d just do the marathon, Well all besides IPL Ian Giggs that is (See my other article IPL Giggsy).

Helsinki was not bad for restaurants even if slightly on the extensive side so we eventually found a great place overlooking the central square. Two of our crowd I won’t mention decided they’d go culturally overboard and dig out a McDonalds to eat. I mean why eat at a nice restaurant in Helsinki when there’s a Big Mac & fries on offer that’s not going to eat itself? Luckily they redeemed themselves by suggesting Hard Rock for drinks later on 😊

Boat trip was great the next day. We thought it would be a small boat but we actually had a 10 deck cruise ship. A love boat trips so this was a great adventure. Bushy was in his element as there was a full-size souvenir shop on board. Never really been one for long cruises but this was great fun. Giggsy was weighing how many laps around the boat would be a parkrun.

After leaving the boat at Tallinn Pete Morris was on a mission to do the 10K also so he dragged Bushy along ahead to the hotel well ahead of us. There were entries on the day so both managed to enter along with Kingsley who’d booked it in advance. We had to wade through the 10K runners to get to the expo but the atmosphere was electric and it was a sunny day and besides it was only a short walk from the hotel.. What a stunning old town this was, even the authentic costumed cheer leaders were giving it loads at the start. We were hoping the weather would be this good for the marathon the following day. We sat at an outside bar near the 10K finish and soaked up the atmosphere. We finally had time to appreciate hotel later. It looked like it had come straight from an Agatha Christie novel; complete with 30s Art Deco décor and an ancient metal cage lift which I just loved.

During the evening finding somewhere to eat proved slightly problematic. It was Caroline’s pre birthday meal so we decided to try and find somewhere nice. Bushy & Pete are quite happy with British style burger bar so we left them to it. The other’s also managed to find a great place. 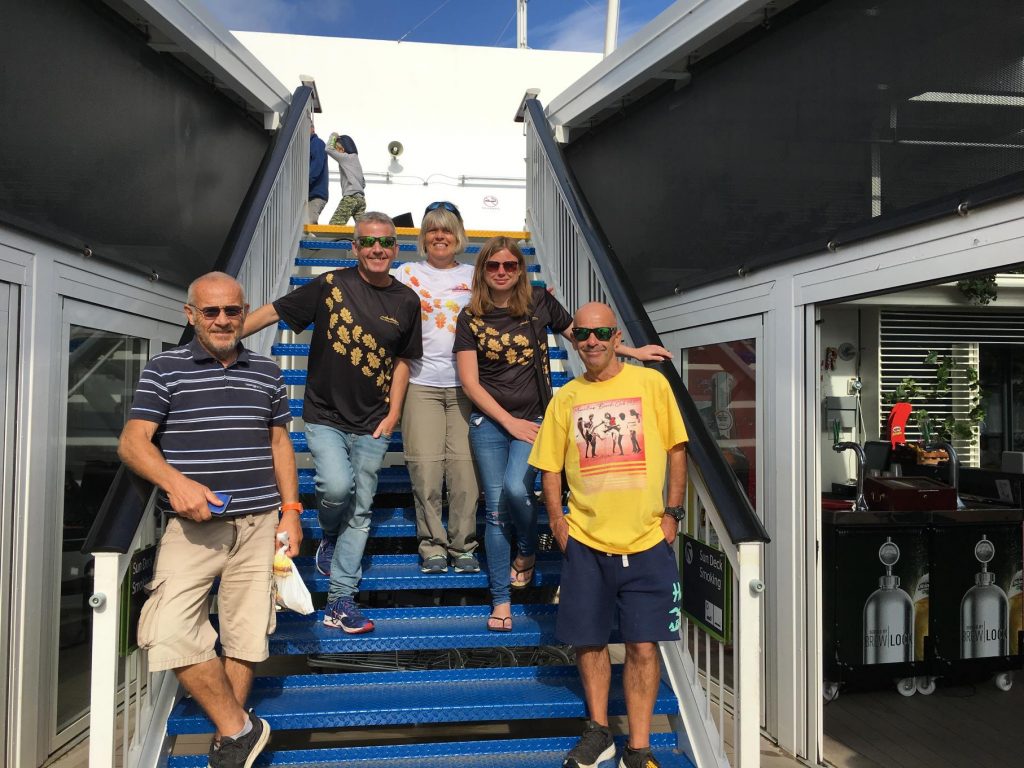 We eventually settled for a cracking Italian restaurant which was bathed in dim lights on the outside terrace. Was similar to the kind of places where we ate in Verona. This was a top notch place without having to trade in your jewellery for a decent bottle of vino and a nice meal.

We met the others later on in the local Depeche Mode bar. I’m a big fan so loved this place. All drinks & cocktails named after Depeche mode songs as well as their music constantly playing. I’m surprised this idea has not spread to other cities. A ‘Steps’ Bar anyone? J

It was race morning and also Caroline’s birthday. Last year she had her birthday in Bordeux, France as we had the Medoc marathon and this year she’d be running one also. Hey who wants an easy day anyway? How many birthdays do we forget? Or should I say would rather forget. The hotel had laid on breakfast at 7 and we were next to the start so we could relax and not have to rush and find toilets etc for a change.

Kingsley & Linda were doing the ½ so they started later but for the rest of us it was the obligatory pics at the start.

The Marathon starts at Viru Gate which was part of the defence system of Tallinn City that was built in the 14th century. I doubt if they had marathons in the 14th century but if they did they may not have appreciated as much as we did, Was an amazing view looking at the gate towers though the electrifying atmosphere as the race got under way. 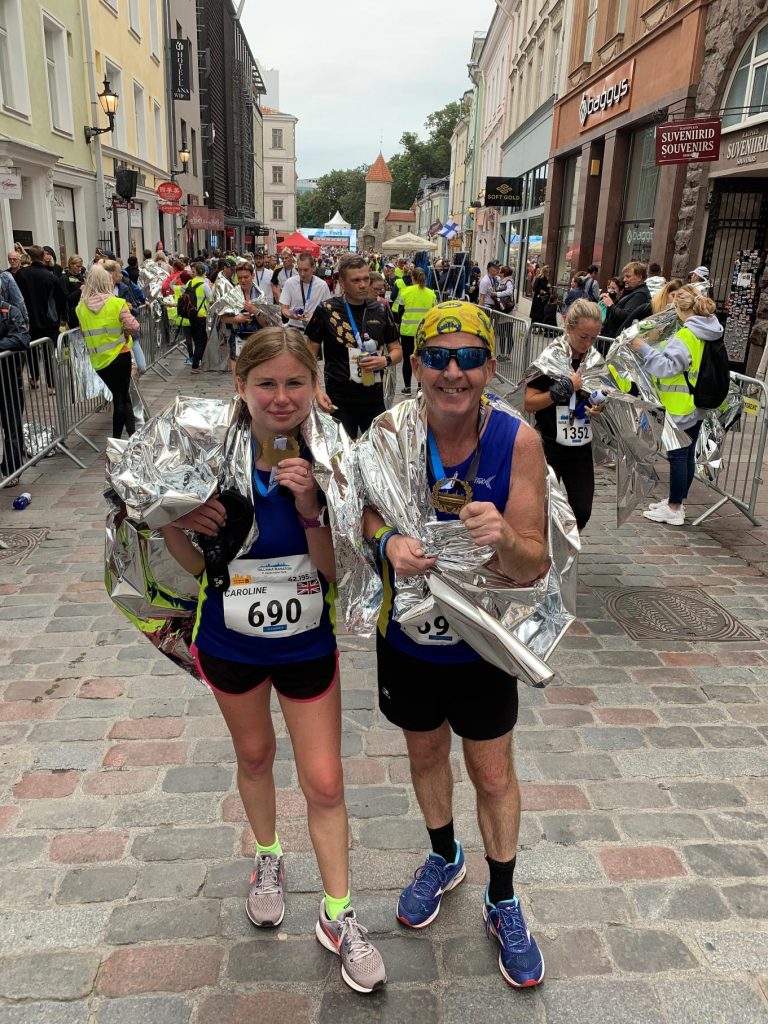 Did I spot TV cameras? Oh no they’d worked out #TeamJackMon were in town or rather they’d latched on that Bushy had ran over a 1000 marathons and wanted to catch him before he wandered into a souvenir shop en-route.

It was a great start as we circled around the old town before heading off into the country. There were a few bands on route which added to the atmosphere. Some of these smaller marathons have more entertainment along the course than the so-called Rock ‘n’ Roll marathons but don’t really advertise it. One thing about this course that sticks in my mind is we ran about 2k through a zoo. All was fine until we ran past a cage were an angry looking bear was rattling on the bars of the cage. Felt sorry for the poor animal locked up. Friendly marshals & aid stations were plentiful on this virtually flat scenic course so it’s definitely one I’d recommend. 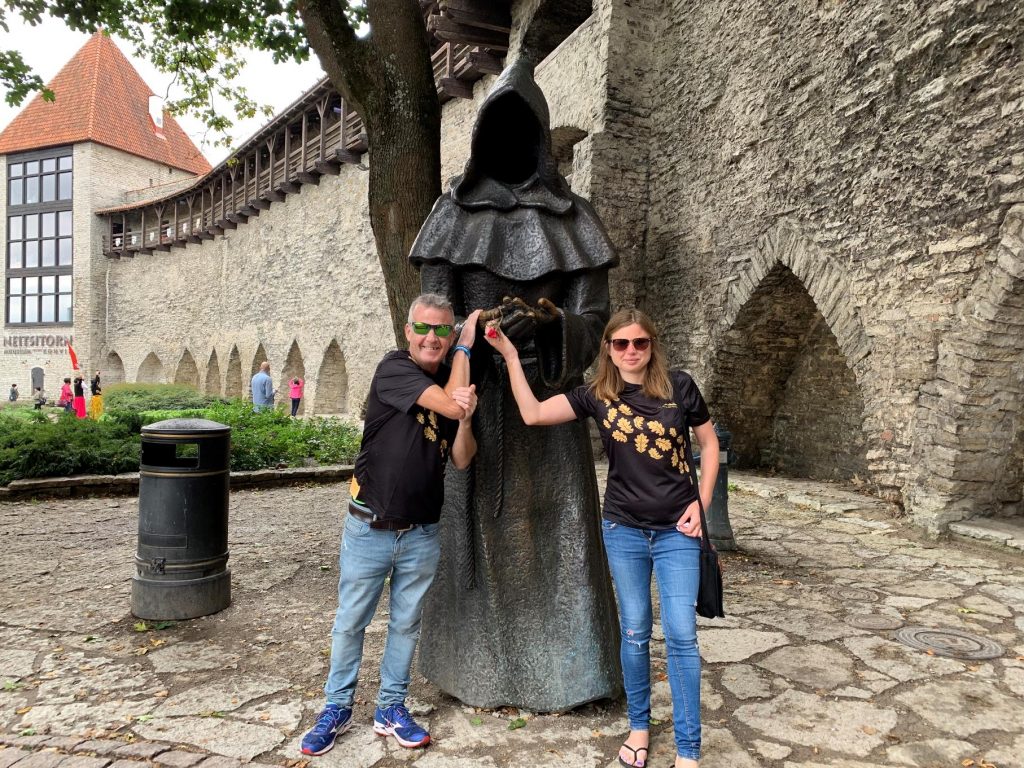 These marathons don’t get an easier whether it’s home or abroad. All are 26.2 miles so sometimes it’s just the thought of a beer at the end and a decent after party that keeps you going. I’m baffled why we keep running them but at a push I’d say it’s the traveling & the people that keep us focused. Believe me it’s sometimes difficult to stay motivated so always a good idea to vary the location. Anyway we finally crossed the finish line and the birthday girl had managed to beat me and everyone else in our crew for that matter ‘I’ve had enough of marathons’ were her famous words uttered for the umpteenth time as a bottle of water and flyer for next year was trust in her hand. Crowd support at the end was great.

Talking of after parties we resigned ourselves to all meeting for a beer at local bar near hotel after the race. As I get slightly bored in one place we decided to take a trip to baggage to find other runners whilst Caroline & I waited for the rest. We stumbled upon free food & (alcoholic) drink which we were not aware of. Runners from all over Europe were there including one German guy who’d ran over 1,500 marathons. We just had to get a pic of him & Bushy. I’ll just say that this could well be the best after race party we’ve attended though there’s some stiff competition from Rome, Paphos, Liverpool & Lanzarote to name but a few. Caroline even ended up pouring beers for other runners. Well it was her birthday. 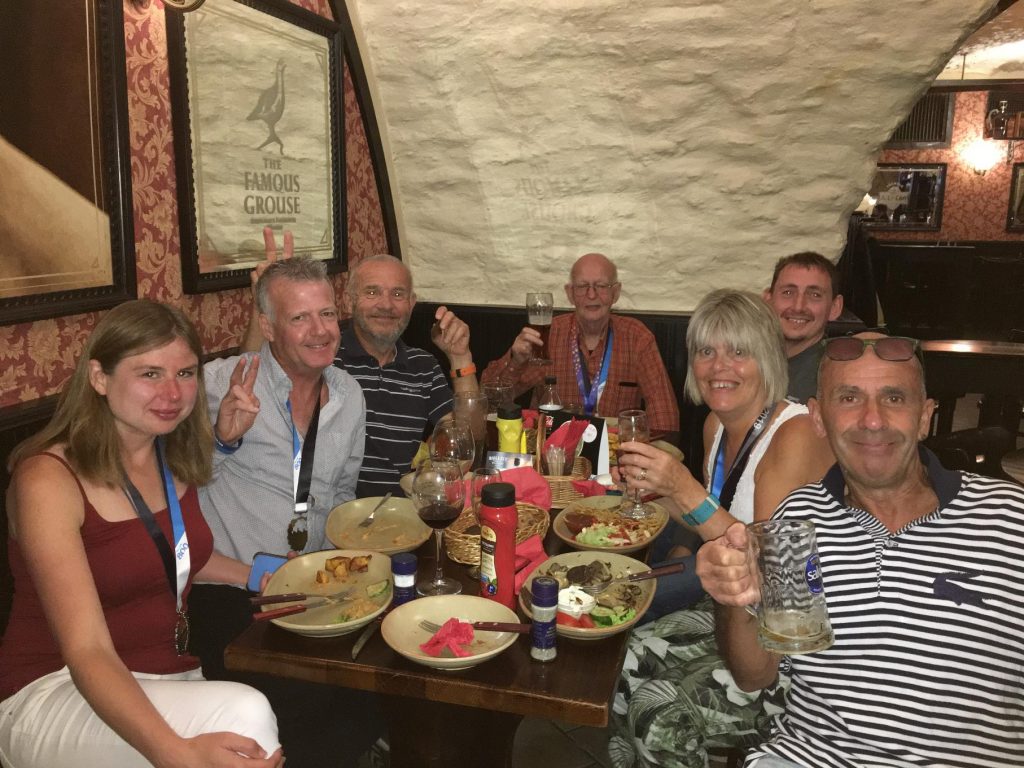 As always, time is never on our side but after a quick break we were out again in the evening. You may have gathered Caroline & I enjoy authentic places and try to avoid British & Irish bars like the plague. To be fair the others were up to this also.  The bunch of us along with Linda’s new friend Julia found what was called ‘The Oldest Bar in Tallinn’ which was a down stairs basement. Hang on, had I just stepped out of the Tardis? We seemed to have been transported 400 years back in time. The Karja Kelder had vaulted ceilings & dim lights and stressed out staff trying to cope with demanding 21st century customers. They even sold pigs ears here. Anyway this was great fun especially as we had 2 people amongst us who couldn’t cope with anything besides basic food. After about 10 menu changes we eventually settled down to some great beer & food. Linda’s new friend Julia seemed to find us all entertaining and immediately signed up to do another marathon abroad. Malaga anyone? I never realised we were all a travelling cabaret act but if it gets people running & healthy then it’s fine by me. Guess we could start charging for live Bushy & Pete Morris arguments. Surely there’s a market for that? On this occasion they did it for free and it turned out a great evening. Guess there was only the birthday cake missing. As you may have guessed we were the last people out in Tallinn.

All good thigs must come to an end so the next day it was a case of Caroline & I cramming in as many sights as possible. We fought our way through hordes of stick carrying tourists to visit Freedom Square, Maidens Tower, Toompea Castle and the excellent St Alexander Nevsky Cathedral before finally heading to the boat port to catch to floating hotel back to Helsinki and then our flight home. 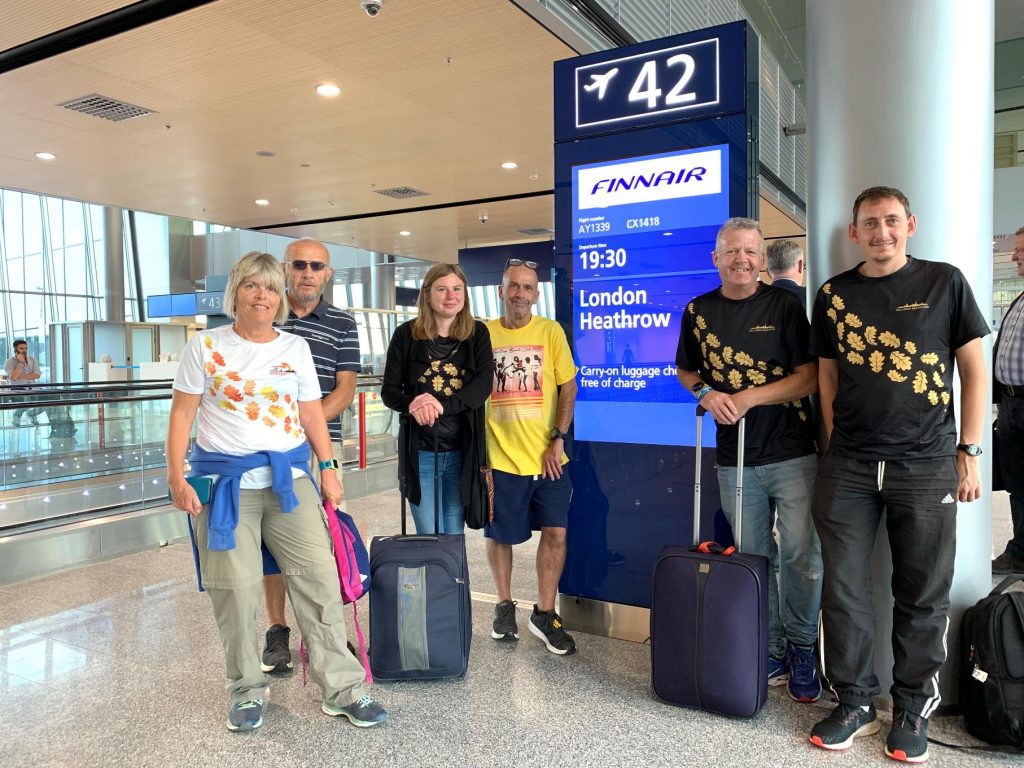 All in all, a great trip with great pals. Marathons abroad can be difficult especially in scorching hot weather (though I must admit to secretly enjoying the pain). But as always the excuse to meet more like minded people and experience a different country & culture is an absolute bonus. Next port of call Palma, Majorca Marathon in a couple of weeks. As always, anyone who wants to join us or other roadrunners on a running jaunt abroad then give us a shout on Facebook or visit Runners on the Road on our website.