Kipchoge? Kosgei? Who needs ‘em? We’ve got BRENDAN MORRIS, the man with the incredibly consistent 5k splits (see below). Here’s the inside story of his brilliant run at the Chicago Marathon…

IT’S the morning after the day before. I’m in my pyjamas, sat in the hotel lobby making the most of the free coffee. I feel horrendous, yet happy. The classical music they are playing is far too loud for my current state and the spotlights in the ceiling feel as though they are burning through my retinas and boiling my brain.

I found out last night what American rappers mean when they refer to a “forty”. A forty-ounce pitcher of beer, like a lot of things in America, is too big. Especially after the free can of lager you get for finishing the marathon, three pints of IPA in the after-party and four pints of Sam Adams in an “English” pub called The Elephant and Castle. 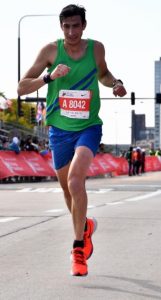 My body clock is still closer to UK time than US. The last couple of nights I’ve been going to bed at around 8pm and getting up at about 3.30am. Saturday night followed that pattern and apart from getting up in the night twice to go to toilet I managed a good six hours sleep. It might not sound much, but for the night before a marathon, that’s quite a lot for me. Anxiety and nerves in the past have meant almost no sleep, or very little, especially when I know that I have a good shot at recording a personal best.

The marathon starts at 07.30 (not sure why) so it’s recommended that you’re at the start for 05.30. This meant leaving the hotel to make the 1.5 mile walk at about 5am. I knew it was going to be fairly cold, but I wasn’t prepared for just how cold it was. Including running vest, I had on four layers but the cold wind seemed to go straight through them, which meant a good two and half hours of shivering.

I tried to stay off my feet as much as I could in the start area. I sat on the ground by a large fountain. This was good for 20 minutes, but as it got busier I realised I was in the perfect “selfie” vista of the buildings in the background and fountain in the foreground. After the third person asked me to take their picture for them I decided to move on.

I perched on a bench next to a couple of Chinese runners (American nationals). They could hear my teeth chattering and took pity on me and lent me a jacket they had packed in one of their bags. They were seasoned marathon runners and it was good to get some of their advice. Chatting to them was also a great distraction from the anxiety and I not only felt warmer when leaving them, but definitely more calm.

The cold conditions I knew were actually a blessing, eight degrees centigrade and “breezy” would be great…… once we got going. By the time I was in the start pen my back was as stiff as a board from shivering. I tried to stretch it, but we were packed in like sardines so I didn’t get the chance.

The klaxon goes and we’re off. The first 500 metres or so is quite wide, so alleviates the bunching you often get at these large events. By two miles the road was fairly clear to run into.

I had been warned by many that the GPS signal was poor for some of the course. I had made the decision to use my Garmin more like a regular watch and use the mile markers to track my pace. The plan was to set out at 5.55 per mile and see how long I could hold on. 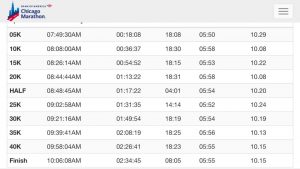 In typical fashion, adrenaline and excitement had meant I had gone off too quickly. By the third mile I noticed that I was 20 seconds ahead of my target pace. I knew I had to slow myself and try harder to maintain the 5.55.

I clicked into a good rhythm and the miles ticked by. I was hitting the 5.55 per mile pace very accurately; within a few seconds of the target time each mile marker. The course is very flat and has long straight stretches, making it great to maintain a good pace.

There were a couple of times early on where I felt it to be a bit worryingly difficult. Around seven, eight miles and then again between 11 and 14. I tried not to panic and just eased the effort level. Surprisingly this didn’t seem to affect my pace; I was still hitting the miles at around 5.55 and I was feeling more comfortable again.

The course was well supported almost all the way round. There were quiet sections, but these were soon interrupted with pockets of cheering supporters, DJ’s and other musical acts.

We must have gone through a university campus, or nearby, as there was a particularly loud and possibly drunken section around ten miles in. The crowds in the centre of Chicago had all the American enthusiasm you can imagine and helped drive you through the concrete maze of tall buildings, bridges and tunnels.

The wind had been intermittent and I hadn’t quite worked out which direction it was coming from. There were definitely times it felt as though it was behind you pushing you on, but other times you would turn the corner on the course and it would crash into you like a firm palm to the chest. 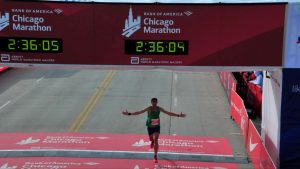 The miles ticked on… 16, 17, 18. I was still feeling fairly comfortable at this pace. I was waiting now to see when I was going to hit the wall. I surely couldn’t be this comfortable for much longer?

At 20 miles I was still feeling good. I started thinking about the finish for the first time. I was starting to think about if and when I should try and increase the pace.

I was by this time, a good 40 seconds up on my target, so had plenty of time in the bank if I wanted to just try to maintain pace till the end. I decided that at the 22-mile mark I would start increasing my effort level.

At 22 miles I tried to gently ease into a quicker pace. I went purely on feel and didn’t even try to use my Garmin. I felt as though I was putting more effort in and turning my legs more quickly. I came up to the 23-mile mark. 5.55 exactly! I hadn’t run any quicker at all!

This worried me slightly as I was starting to find life more difficult. I tried to increase the effort level again. The 24-mile marker came by…  5.53!

From here I gave it my all. I only looked at my watch twice after this; once at the “one mile to go” sign and then the “100 metres to go” sign.

With a mile to go I knew I was on for a good time. I desperately wanted to try to go under 2hrs 35mins so needed to do the last mile in under 6.10. 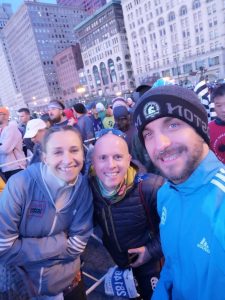 There is a slight incline in the course in the last 400m. It is probably very mild, but at 25.8 miles into a marathon, you feel like you’re being asked to scale Kendrick Road on a bike with flat tyres.

At the 100m to go sign, I knew I had done it. Smashed my existing PB and, better still, managed to run under 2.35! I started celebrating (and am yet to stop) and properly ran through the finish line. (Rather than my usual immediate stop and semi-collapse).

I couldn’t quite believe it. I didn’t know how I managed to keep pace all the way to the end… no wall, no injury or cramp, just a very hard long Sunday run.

I was desperate to meet up with my wife, Gemma, and share the joy. I ran through the finishing area stopping only to grab a banana, water and can of beer they give you and posed for a couple of pictures.

I ran past the finishers’ goody bags by mistake, so never picked one up. I ran to an empty bag-check tent then on to the meeting area where I could see my wife waiting for me. I picked up my pace in the last 20m toward her and pretty much rugby-tackled her to the ground, like a dog who hadn’t seen their owner for a month (with all the panting and licking).

The hotel staff are starting to clear away the breakfast material so it must be 10 o’clock. I’d better get back to the room. Was it really me who ran that time yesterday? Was it all a drunken dream? I’d better check the results on my phone again… yep, seems it was me!