From Dorset to Illinois, the Roadrunners website has the weekend action covered, thanks once more to ladies captain SAM WHALLEY…

FIFTEEN hardy Reading Roadrunners made the rainy journey to Bournemouth for the first fixture of the 2019-20 Hampshire League. This is the furthest away of the races in this league, so we were pleased to be able to field full teams, although until just before the women’s race traffic problems and navigational issues had us feeling a little thin on the ground.

The women’s race was underway at 1.35pm, and as usual we took up our starting positions way behind the Under 20 elites. Three of us were excited to be sporting brand new spikes, although only one of us had tried them out before that moment, and at least one of the others was wishing they had done the same.

We were grateful for a break in the rain, and for the course to not have yet been run on by too many feet. We’d be sure to churn it up nicely for the men.

At 6k, the women’s race consisted of two small loops and two large ones, mostly on grass, and with a stretch of uphill through the woods. Any other ups and downs were short and steep, but enough to remind me that I really need to do some hill training.

Sarah Dooley, in great shape only a couple of weeks after running a PB at the Berlin Marathon, was our first woman home in 56th (12th vet). 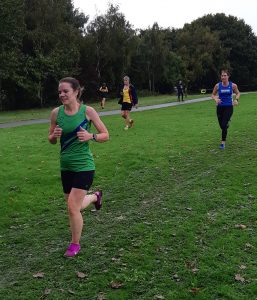 Chloe Lloyd (right), only recently having returned from injury, continued her fantastic run of form and was second, in 88th, with me (Sam Whalley) in third (113th, and 38th vet) to complete the scoring team. The senior women’s team was 16th.

Chloe later told me she’d been looking for me on the corners; she needn’t have worried, there was no doubt in my mind that she’d be faster. We still needed a third vet though (increased from 35 to 40 this year, to match the men’s vet category), and this was to be Claire Seymour (132nd, 48th vet), pleased that she had finished, despite a niggly leg, with Alex Bennell only two places behind in 134th (50th vet), keen to get finished before her son set off in the U17 men’s race.

The vet women’s team was fifth. The inspirational Cecilia Csemiczky completed the women’s team, in 181st (80th vet, but first FV70), and, despite her fears, was not in last of the 190 runners. Well done, team!

The men were off at 2.30pm, just in time for the rain to restart, and had four large loops to look forward to for their 10k. 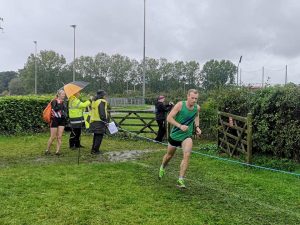 I’m calling Jamie Smith (left) the unofficial men’s captain for the day with the actual men’s captain being in Chicago for the marathon; the support and encouragement Jamie offered to the rest of the team was commendable (and he is also a dab hand at putting up the tent).

There were a few switches of position during the race, with Mark Apsey, on his way back from a period of injury, and now with a new baby in the house, initially leading the team, but being caught by Jamie later on, with Jamie finishing 43rd, and Mark 47th.

Chris Burt was third home, in 69th, having got the bug for the Hampshire League right at the end of last season, and keen to get started this year. It might have been Chris’s excitement that led him to fall over twice during the race! A spikes newbie (below), he thinks he might have to plant his feet differently to feel the benefit of the extra grip. 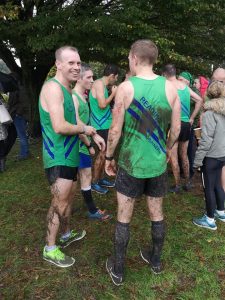 The men’s team was completed by Hampshire League debutant Tony Page (141st, 46th vet), who probably won’t be brave enough to run in road shoes next time, Colin Cottell (161st, 59th vet) and David Walkley, who decided halfway through the race that it would actually be easier to run without glasses, and finished in a creditable 195th out of 239 runners, having raced both a marathon and a half marathon in the last two weeks. Great work, guys!

This is a very promising start to the season, and we look forward to seeing how far we can get this year. Luckily we won’t have to go as far as Bournemouth again, with the next fixture being at Sparsholt, near Winchester, on Saturday, November 9th.

I, for one, really appreciate everyone taking time out of their weekend to travel to these races and represent the club, so thank you, and most of all, well done! Race rewards from the Whalley bakery were vegan brownies and gluten-free white chocolate crisped rice squares.

Elsewhere this weekend, over in Chicago, Brendan Morris ran a 2:34.45 marathon, a PB by over four minutes, and you might have seen him live on the BBC red button (below), crossing the finish line in 201st place — brilliant work! “I’m over the moon with that performance,” said Brendan. “Everything just clicked into place.”

Also delighted with her run in the Windy City was Susan Knight, whose time of 4:00.14 represented a PB by five and a half minutes. “I went much too fast in the first half,” said Susan, “but I’ve learned a lot just in case I ever feel like another one.”

There was an even bigger PB — more than 26 minutes — by coach Vroni Royle who finished in 4:00.02. “Those pesky two seconds!” said Vroni, who threatens something similar at next weekend’s Great South Run.

Closer to home, Ian Giggs was 43rd in the Eden Project Marathon, with a great time of 3:52.13 on what he described as a hilly course with some off-road sections.

Noora Eresmaa and Christina Calderon ran the Autumn 100 mile race in wind and rain to complete the 100 mile Grand Slam, which means they have run four 100-mile races in the past five months. Incredible — I cannot even imagine what this must be like, but I hope you both live in bungalows.

Despite the atrocious conditions another Roadrunner claiming a PB in the Oxford race was Clinton Montague, with 1:35.44, off the back of the two PBs he achieved in one night in the Friday track mile and 5k.

Fergal Donnelly ran 1:30.21 in Exeter’s Great West Run (half marathon), while Helen Pool equalled her PB with 1:34.36, and was second FV45. As a Devonian, I can completely imagine that the course might have been more than a bit challenging.

Brian Kirsopp was eighth in the Tadley 10 mile, in an impressive 1:03.47, and was unsurprisingly first MV50. At Wimbledon, Ashley Middlewick clinched third place in this month’s Second Sunday 5 event.

And finally, supervet (not the animal kind) Jane Davies achieved a whopping 87.97% age grading at Prospect parkrun, bettered on that course only by the 88.92% she achieved last year.