SUNDAY, October 6th, 2019 may well go down in history as the busiest race day ever. There were Roadrunners everywhere, and not just running on roads, writes SAM WHALLEY…

As a good number of us lined up for the start of Basingstoke Half Marathon, the final half marathon in this year’s club championship, I wondered whether it would have been preferable to have been running a six-mile cross-country race…… until I saw the photos and realised the usual stream had been pretty much a river! 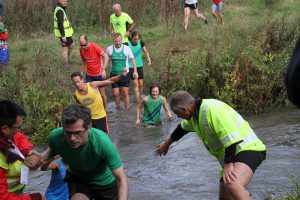 I felt bad that I hadn’t reminded people to bring a complete change of clothes with them; they’ll know for next time.

A whopping 46 RRs and three guests turned up to run the first Thames Valley XC fixture of the season, hosted by Metros, in Hillingdon, some of them for the first time.

First to score for RRs was Jack Gregory, in second place overall, followed by Chris Lucas in fifth. Third to score was Andy Blenkinsop, as first vet for the club, and then Ian Giggs. Gavin Rennie was the club’s second vet, and the scoring male team was completed by Markus Orgill.

For the women, it was Gemma Buley who was first to score, followed by Mel Shaw. Vets Claire Marks and Mary Janssen completed the scoring team.

If you didn’t make the scoring team, you will undoubtedly have affected the scores of the other teams by finishing ahead of their runners. Every position counts in XC.

The next TVXC fixture will be hosted by Thames Valley Triathlets, at St Neot’s School in Eversley, on Sunday, October 20th. In the interim, the first fixture of the Hampshire League will be in Bournemouth on Saturday, October 12th. 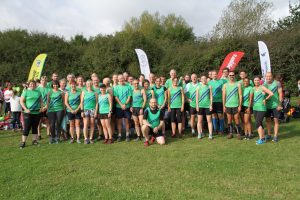 As people were tucking into the post-race refreshments after the Metros event, many of us were still going at Basingstoke.

It was a great performance by the women in particular, with Laura Peatey fourth, Katherine Sargeant fifth, and Helen Pool eighth. Katherine was also first FV50 — by the little matter of TWENTY-TWO minutes! — and Helen was third FV40. That was easily enough to take the ladies’ team trophy back to Palmer Park.

As far as the club champs were concerned, Laura picked up 50 points in the seniors category, and Donna Saunders picked up 48, with non-contender Lizzie Hogan in between the two. Hannah McPhee took away 47. For the vet 40s, Katherine collected her usual 50 points, Helen 49, and Sam Whalley 48. Alex Bennell was no longer in the competition.

There was only one competitor in the vet 50s age group, so Nora Holford was able to increase her lead at the top of the group by four points. Linda Wright is the last women standing in the FV60s, so must have just taken part for the fun of it!

For the men, Brian Kirsopp was third MV50, and David Dibben won the MV70 age category. 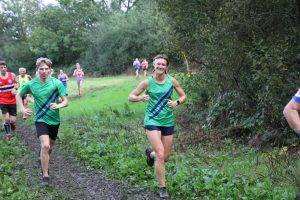 In the club champs, David Walkley’s 50 points and Derek Cheng’s 49 have propelled them further up the table. David earned his points the hard way, running a 35-seconds PB just a week after a sub-4hrs finish in the Barnstaple Marathon.

In the vet 40 category, Tony Page was delighted to pick up 50 points (and a PB) over Ben Whalley’s 49 to increase his lead at the top of the table, while Tim Miller came in sixth for 44 points, behind non-competitors Fergal Donnelly, Chris Thomas and Tony Long.

For the highly competitive vet 50s, our first finisher Brian Kirsopp’s 50 points took him to top of the table. There were 49 points for David Caswell, 48 for David Fiddes and 47 for Tony Streams. I’m looking forward to seeing how this category in particular will end.

Joe Blair was the only contender for the vet 60s, and his 50 points keep him in second place on the table, while David Dibben’s 50 keep him in a similar position for the vet 70s. 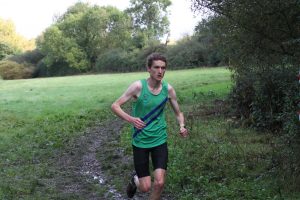 With only two more events in the championship, the Ricky Road 10 miles on  October 27th and the Mapledurham 10 on December 1st, there is still time for positions to change in many of the categories.

Elsewhere in the country, there were Roadrunners aplenty at the Bournemouth 10k, Half Marathon and Marathon. Reports of smashed targets are still coming in, but Miriam Coleman was possibly the most delighted to have recorded a PB with her first ever sub-2 hour half marathon, while Rachel Helsby PBd at Cardiff Half Marathon.

Rob Cannings nailed a PB at the Bournemouth 10k to follow up his huge improvement at 5k at the recent Track Friday event.

Closer to home there was a thumping win for David McCoy at the Reading 020 10k. The busy Ulsterman beat the second man home by more than four minutes in a useful warm-up for this weekend’s Chicago Marathon.

There was the customary win in the FV50 group at this event for Lesley Whiley but Ed Dodwell had to settle for second place in the MV60s in a race top-heavy with early finishers from his age group.

Plaudits for the best marathon performance of the weekend by a Roadrunner went to Andrew Smith for his run of 2hrs 54mins at Chester.