Roadrunners were out in force when the first race of the 2022 cross-country season was contested at Hillingdon and club committee chair SAM WHALLEY was there with her notebook and pen as well as her running shoes. Here’s her report…

Sarah Dooley’s London Marathon PB a week ago must have been perfect preparation for the XC season as she took the third-placed female spot in the Thames Valley XC League’s opening fixture, hosted by Metros. In fact she scored as second as the race was won by Jess Gibbon, the national cross-country champion, running as a guest for Thames Valley Triathletes. 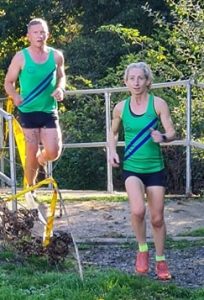 The course was the usual two laps, each including the infamous ski slope and (thankfully shallow) stream, but this year distinctly lacking in mud.

Having signed up after a late plea for more women for take part, Sarah (right) — who was 76th overall — could have done with more support at the sharp end of the race. Second female home for was club was me (218th), followed by Gemma Higgs (230th), with Sarah Richmond-Devoy (275th) surprised to find herself completing the scoring team for the first time.

There were 19 runners in the RR men’s team, to contrast the women’s ten, and it was Ben Paviour (below) who led them home in an excellent seventh place.

Behind him, the rest of the team was fairly closely packed, with Fergal Donnelly (23rd), first-timer Nathan Davies (29th), Tony Page (30th), Brendan Russell (39th), and Dimi Gospodinov (43rd) making up the scorers.

Also making their TVXC debuts for the club were Mark Allen, 40 years after his last XC outing, and Chris Webber, who, as a farmer, will be no stranger to mud. Well done to everyone who ran.

Full results from Hillingdon are available via this link: http://www.tvxc.org.uk/results/team.

They show that our men finished third, the women eighth and the RR team fourth overall.

XC races are huge team events, with every runner’s position affecting our team score or those of the other squads.

The next XC event will be our home fixture, at Ashenbury Park in Woodley, on Sunday October 30th, so let’s aim for a big turn-out there. We will also need volunteers on the day.

The club’s XC championship requires runners to participate in a minimum of five TVXC or Hampshire League races during the season, at least one of which must be a TVXC race.

Volunteering at our home fixture counts towards an individual’s score in the club championship. As the saying goes: “You’ve got to be in it to win it.” Here’s a link to the champs rules… https://readingroadrunners.org/wp-content/uploads/2022/04/RR-XC-Club-ChampsRules2022-2023pdf