This year’s men’s six-stage, women’s four-stage and vets’ road relays were all run over a 6k course at the Rushmoor Arena, Aldershot… and, wow, what a great venue! 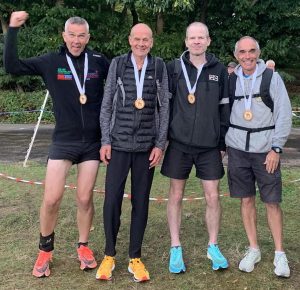 Roadrunners had a super turn-out, with eight teams competing. And we had some great results, with top-three finishes for the men’s vet 55 team (right) and women’s vets team.

As a southern qualifier for the men’s national road relays, the day’s racing attracted 80 men’s teams and 25 vets as well as 55 ladies squads and 14 vets. Throw in all the junior events at under 13, under 15 and under 17 levels and that made it a total of over 450 teams representing more than 1700 runners.

There were some very high-qualify fields, including the Diamond League runner Jack Rowe (who ran the fastest leg of 17:30) and Ellis Cross — renowned for beating Mo Farah over 10K — running for Aldershot Farnham & District. Not surprisingly, the home team won, ahead of Tonbridge and Cambridge & Coleridge.

The women’s race was also won by AFD, with Bracknell AC in second. The fastest women were Amelia Quirk (Bracknell), Steph Twell (AFD) and Jess Gibbon (Reading AC), all with times under 20 minutes. 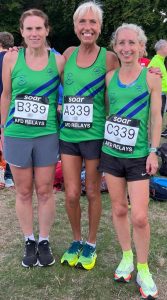 There was an amazing third place for our women’s vets team (left) of Katherine Streams (22:49) , Helen Pool (25:18) and Sarah Dooley (24:43). Katherine put us in third place after an excellent first leg — fourth fastest in the vets race — and that was held by Helen and Sarah, who brought the team home in 1:12.50.

Pete took us in to the lead with the fastest second leg, gaining three places after Gavin was fourth fastest on the very competitive first leg.  Chris was second fastest on his leg, before handing over to Terry, who was passed in the final 100 metres by Brighton Phoenix, whose final runner ran an amazing 22.03.  This was a great achievement for us… well done team! 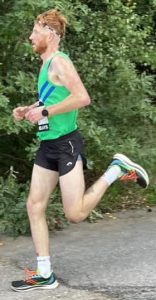 Thanks to everyone who took part and stayed to the end to support all our runners and see the presentation ceremony for our men’s V55 team.

Here’s your link to the results on an Excel spreadsheet…. https://www.afd.org.uk/aldershot-road-relays/