Another successful weekend of cross-country racing for Reading Roadrunners, and here’s another in-depth report from ladies’ captain Sam Whalley…

IT WAS touch and go whether Jane Davies would be able to defend her FV60 title in the Southern Masters XC Championships in Oxford, but fortunately or us all, her new granddaughter Mollie arrived the previous weekend, leaving Jane able to slip away briefly and take on the ‘technical’ 6k course, with its grass, steep hills and plenty of mud. 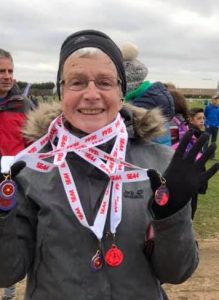 Jane and fellow FV60 team-mate, the relatively new to XC Tracey Lasan, described their approach to the rooty descents as ‘geriatric’.

Despite their claims, Jane covered the course in a gold medal-retaining 28.46, in 33rd place overall including FV40s and FV50s, with Tracey in 30.09, 45th place overall, and picking up the bronze for the age category.

The team was completed by Cecilia Csemiczky, in 45.53, 75th place, and the three women were crowned South of England FV60 XC champions.

Cecilia (right) was ninth in the FV65 age category, but will not know her true position as the SEAA does not have an entry option for FV70s. Maybe time for change?

In the same race, the MV70 team of Eddie Thorpe, Jim Kiddie and Ken Beck fared well in spite of a fast-paced start. Eddie was first to finish in 34.14, in 9th, slowed by a slip on a wooden bridge on the final entry to the field, which saw him taking a dip in the stream. 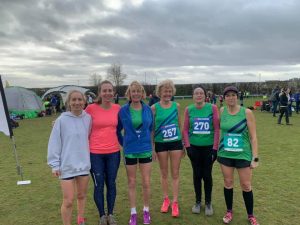 A little chilly and scraped, Eddie was cleaned up and left in good spirits.

Jim had been allowed to make up a bit of distance on Eddie, though, and finished just behind, in 34.16, and 11th. Ken Beck was 12th, in 36.04, having not run XC for twenty years. Results show that no other club had managed to put together a complete team, and there was no team prize awarded. Perhaps that’s something else for the SEAA to review. 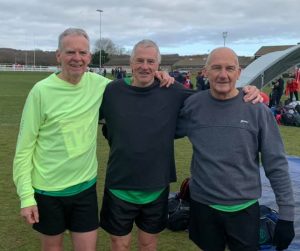 Sadly Fergal’s injury makes him a big doubt for both next weekend’s Berkshire XC Championships and our home TVXC fixture at Ashenbury Park on December 22nd.

The MV50 team was tenth, and overall the men’s team of Tony, Fergal and Pete was 17th out of 24 complete teams. 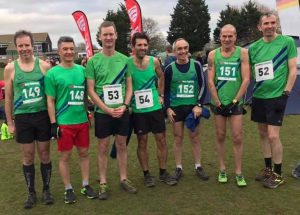 It goes without saying that these were excellent performances all round, in an event of such a high standard.

Thanks for that, Sam! Now here’s the rest of the weekend action…

No foreign Sunday marathon this weekend for our usual international jet-set foursome… but that’s only because they raced on Saturday! This time they had the company of some real quality towards the front of the field, Brian Kirsopp running 3:28.06 in finishing 71st.

Paul Monaghan and Caroline Jackson ran 4:38.31, Martin Bush 4:52.36 and Pete Morris 5:09.10, despite a heavy fall. Once again they were moaning about having to run in baking hot temperatures, without too much sympathy from back home. 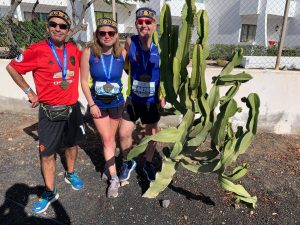 Another Roadrunner doing something a bit different was Joe Blair, who competed in the eight-mile Grim Challenge, an endurance/obstacle event run over an Army assault course near Aldershot. It made for a doubly grim weekend after he watched Reading get stuffed by Birmingham City at the MadStad on Saturday.

Joe — who finished second MV60 in 1:15.54 — said: “The good news is that I wasn’t too muddy at the end; the bad news is that the mud washed off during the last three miles, which involved wading waist-deep through seven or eight gullies of cold water. The whole thing was tough but fulfilling in a weird way.”

So when he lines up for the Muddy Welly 10k at Crowthorne next weekend it might not seem quite so…. muddy!

Nick Adley was the only Roadrunner to contest the Tadley Xmas XC, and he finished 71st in 1:02.25.