A SLIGHTLY under the weather Jack Gregory decided to run only in the Thames Valley Cross Country League, rather than the Hampshire League. This proved a fine choice, with a solo front run to win the race at Handy Cross.

Saturday brought the third round of the Hampshire League XC fixtures and, being hosted by Aldershot ,we expected a number of top-class athletes and tough competition. Indeed, Aldershot proved their own team strength by providing the first five male runners to finish.

The air was cold but the ground conditions — when compared to the previous fixture in Winchester  — seemed to be somewhat more ‘runnable’.

Once the majority of runners had arrived, we walked around the course together, finding a mixture of grass, short steep downhill banks and a technical twisting section in the woods, and of course there were also some pretty tough muddy sections.

Spikes laced up, we headed for the start-line. When the gun went it felt like a track race and what can only be described as a sprint for the first corner.

We had a total of 14 Roadrunners competing, being led home by the “mud lover” Mark Worringham in 46th. Our senior team finished in sixth place and that proved enough to keep us sixth overall in this season’s League standings.

The men’s vet team had another excellent performance and continue to lead the way in this season’s league table. 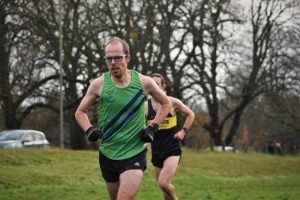 The vets team finished the day second overall to host team Aldershot, who had clearly pulled out all the efforts to win their home fixture. Let’s make sure we return the gesture when the Hampshire League comes to Prospect Park on January 11th.

Ours vets were led home by Mark Worringham (3rd, right) and Tony Page (10th), who were backed by a strong run from Lance Nortcliff in 14th.

While the sharp end of the field is a stellar line-up of top-class athletes, everyone is welcome to take part and there were excellent runs by both Pete Morris in 262nd and Nick Adley in 270th.

It would be great to see some more runners at our next fixture in the New Year.

It’s not every race where you see a Great Britain international (Steph Twell) finish second in the ladies race and find another GB athlete (Andy Vernon) marshalling out on the course all afternoon. 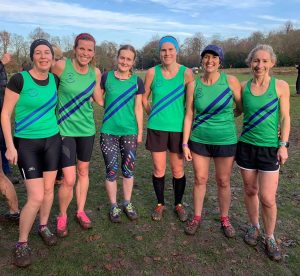 A quick wash of the kit and refuel for some — including both captains, well done Sam! —who were doubling up this weekend, and the runners were raring to go at the next fixture in the TVXC.

This Sunday’s race took place at what is regarded by most runners as the hardest course in the league. I am sure those who had only just recovered from last week’s hills at Sandhurst were looking forward to even more today.

In dry and sunny conditions another large turn-out toed the line undeterred by this week’s exertions.

Before the race began we had a moment’s applause for Bracknell Forest runner Chau See, who sadly collapsed suddenly a week ago and unfortunately passed away this week.

I had the pleasure of knowing Chau for many years through my time at Sweatshop, where he was a regular runner, and then through parkruns, many local races and at Endure 24 every year.

Chau will be remembered for his unwavering smile that always greeted you and I am sure his family will have appreciated the moment taken to reflect. Some asked if there is a collection taking place and here is the link to it:

The Handy Cross race began in earnest downhill before the impending hills to come, and quickly we saw Jack Gregory take to the front. Even more quickly, he disappeared over the top of the first hill and out of sight. 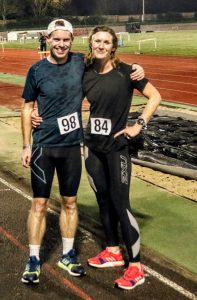 The course, albeit a little drier than we have got used to in recent weeks, did not allow for any easier conditions. Every ascent seemed longer than the previous one but the descents that didn’t feel as long as what had just run up!

The men’s squad comfortably beat Datchet Dashers to the team win, with Jack being supported in the team by seniors Brendan Morris (5th), Sibrand Rinzema (7th), and Jamie Smith (10th). The two scoring vets this week were Fergal Donnelly with a fantastic run in 17th, and Paddy Hayes (44th).

Superb running by everyone at both these events and it was great to see the camaraderie shown between all club members throughout.

The next TVXC will be our own host fixture at Ashenbury Park, Woodley, on December 22nd and it would be great to see as many members as possible turn out. Let’s make sure we can win our host fixture!

Wellesley Woodlands in Aldershot was the venue for the final Hampshire League fixture of 2019. Despite being our third visit to this location, it was the first time we had really been able to see the statue of the Duke of Wellington at the edge of the woods, having only previously experienced foul weather here before.

The women were first up, with their 6k course being made up of a start loop, one medium and one large loop around the outside of grassy pitches, and through twisting woodlands, with a couple of undulations, nothing major. The grassy areas were already pretty churned up and boggy. 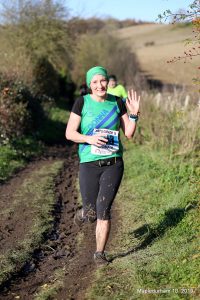 The race started about a minute too early for my liking, as I was still tying my shoelace when the gun sounded, and everyone disappeared into the distance. It’s surprising how far away people can get in 10 seconds. What a rookie!

I think there should be a stewards’ inquiry into how Chloe Lloyd can now finish 50 places ahead of me in a Hampshire League race, or rather, it just goes to show that regular and sensible training can result in consistent excellent performances. Chloe was 65th, with Claire Raynor 94th (34th vet). The vets’ team was a fantastic third! Claire swears by a pre-race parkrun leg-loosener, but I’m too scared to give this a go. 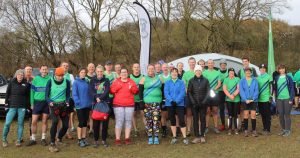 Incidentally, Team GB’s Steph Twell was second, and said the years of training with Aldershot in those woods did not seem to have made them any easier. Even more satisfying then that many of us recorded our best performances on that course.

With the TVXC hosted by Handy Cross Runners the next day, a few of us — Cecilia, Claire Seymour and myself — were up for the ‘double’, being unable to resist the lure of the undulating Bradenham Woods course and its views (apparently there were some, but I didn’t see any).

Bringing the women’s team home was Laura Peatey in seventh overall, followed by Mel Shaw, who although feeling the effects of the sub-20 PB she achieved on the track on Friday evening still managed an excellent ninth. Sarah Alsford was our first vet female, in 23rd, with Claire Marks completing the scoring team in 26th.

There were too many other women to mention them all — which is great — but I must give a shout out to Claire Woodhouse for her storming performance, and Ros Crawford, who seems to be enjoying her first proper season of XC. Well, she keeps coming back for more.

Thanks and well done to everyone who took part in the XC events this weekend.

Here’s the rest of the weekend’s racing news…

Mortimer 10k champion Marcus Fletcher nearly grabbed another title when he finished second in the Mapledurham 10 in a super time of 1:03.41. However Brian Kirsopp was the big winner from the final club championship race of the season, the flying postie coming home ninth overall to wrap up the hotly-contested M50 age group prize.

Brian’s time of 1:08.17 was also good enough to clinch the coveted ‘all racers by age grading’ title, pipping Katherine Sargeant and  Alan Freer. Gen sec Bob Thomas has now produced the final standings and a jubilant Brian said: “A massive thanks to Bob for compiling them and organising all the races.”

Second Roadrunner to finish was Tony Page. In doing so carried off the club’s M40 crown as well as the Mapledurham M40 trophy. Tony was seventh overall in 1:06.46. 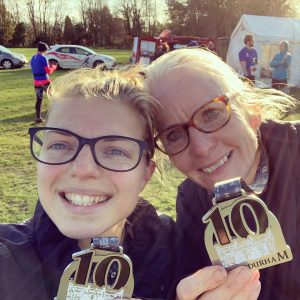 The only other club award to be decided was the senior women’s title, carried off by Donna Saunders after another good run.

Back at Palmer Park, Track Friday supremo Fergal Donnelly is trying to firm up dates for the 2020 meetings after another successful event last week.

Defying an icy track surface, Sibrand Rinzema won the opening mile in 5.02, beating off the challenge of two guest runners from Reading University.

But the Dutchman couldn’t repeat his success in the 5k, finishing second behind Ryan Faulkner, who won in 16.48. 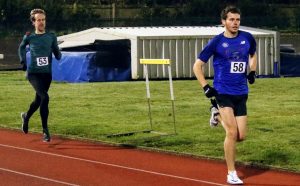 There were stand-out performances — and big PBs — from Mark Dibben (17.52) and Mel Shaw, brilliantly paced by men’s captain Jamie Smith, dipping under the magic 20mins barrier for the first time with 19.53.