PREPARING hard for next month’s Chicago Marathon, BRENDAN MORRIS headed to the Wild West for a training half marathon and came home with a personal best and this brilliant report…

IN the words of David Brent: “I heard they dropped an atomic bomb on Swindon… did about ten quid’s worth of damage.”

Well, that’s probably a bit unfair, but by running the Swindon Half Marathon I’ve apparently viewed the highlights of the town. I hope the organisers have a self-deprecating sense of humour and the “highlights” of the town they list are tongue-in-cheek, yet I can confirm that they seem to be unfortunately accurate…

My relationship with Swindon consists of fond memories of failure and rejection. As a teenager a close friend of mine and I started supporting the football club. It was the early Noughties, when a couple of fake IDs ordered from the back of FHM ensured you could simultaneously be old enough to buy eight cans of Fosters for £5 in the corner shop on the way to the ground and yet secure a child’s train ticket and child entry (£2!) to the ground (as long as we acted sober and avoided breathing cheap lager on the entry stewards).

We watched them be relegated into Division Two. Sometimes we would stay in town after the game and sample the best of the clubs and pubs Swindon had to offer, where if rejection didn’t meet us at the door, it would smack us in the face on the dance floor. I also failed my driving test there, so was keen to make amends.

The race is advertised as being mostly flat. When looking at the profile of the course online, you can quickly see that though most of the course is fairly flat there is a definite hill at mile 11. About 40 metres of elevation over a mile, then the majority of the final mile is a steep downhill. 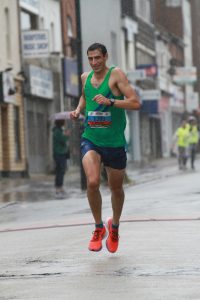 I felt in good shape, thanks largely to the track sessions with team-mates led by Jack Gregory. A team I then ditched to run the Swindon Half (the rest of the guys were running a stellar performance in the Southern Road Relays in Crystal Palace) because that’s the kind of clubman I am…

The game plan, was to aim for a PB (sub-74 minutes preferably). I knew I would slow on the hill at mile 11, so I wanted to be a good 20 seconds up on the target time by the foot of the hill.

The race is a fairly small event for a large town (2500 entrants) and catered well in terms of bag drop and toilets; pretty much no queuing, easy to get to etc.

The race starts at two of the town’s highlights —the County Ground (grey concrete walls) and Magic Roundabout (grey tarmac).

Standing on the start line, the clouds were looking more and more grim and I think we all knew the rain was on the way. Conditions were slightly muggy and the rain when it hit (about one mile in) was actually quite refreshing. It was non-stop from a mile in, all the way to the end and seemed to intensify as the race went on.

It was from the first mile marker that I took the lead. One runner stuck on my heels for another couple of kilometres but then I heard him drop away quite quickly. The next few kilometres were fairly lonely; sweeping perimeter roads broken by roundabouts every 500 metres or so with supporters huddled under bus stops, trees and umbrellas.

I was running pretty well, felt fairly comfortable and was hitting the target pace. I was trying to gauge how far behind second place was by listening to the small groups of supporters and the gap they left between clapping me and the person behind. I could tell second place was gaining on me. 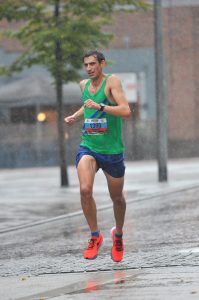 At around five miles I could clearly hear the squelching of second place’s shoes on the soggy roads. He caught me around nine kilometres. We stuck together for about a mile and had a pleasant conversation. Our conversation revealed that he was quicker than me.

He was clearly more comfortable than I was at the pace we were running and he was targeting a PB of his own; a sub-73 minute time.

I made the decision (if you really do make these kinds of decisions) to let him get away. He slowly moved away from me, but I still used his presence to help pace me. I tried my best not to let him get too far ahead and to keep to my target pace. I was just about managing, but it was definitely getting more difficult!

By the ten-mile mark a spectator shouted “23 seconds” at me. I knew that this was the time I was behind him, so that was probably equivalent to about 120 metres (but looked a lot further).

The next bit of drama occurred at one of the advertised highlights. No, not Swindon College, or the Great Western Shopping Centre, or even the Oasis Leisure Centre. I’m talking about the Nationwide Building Society Headquarters. This was at the foot of the dreaded hill.

The course took you into the very start of the car park of the headquarters, before you made a quick U-turn around the end cone and made your way back out to the main road.

As I came towards the end cone there was clearly some commotion. A couple of marshals were yelling “Come back” and l soon realised that the leader had continued into the car park when he was meant to make a U-turn around the final traffic cone.

In fairness to him there were no signs saying that a U-turn was required and I found out from him after the race that the lead motorbike he was following went further into the car park to make the sharp U-turn possible, so he was simply following the lead bike.

After making this error he was now only a short distance ahead. I was close enough to hear him spend the next couple of minutes muttering profanities to himself; so probably about ten metres. His anger seemed to propel him up the hill. He was pulling away from me again.

By now I was just giving it all I had. “Come on, hard effort up the hill, and then cruise to the finish!” I knew by the start of the descent I was one kilometre from the end. I looked at my watch and was behind where I needed to be. It looked like I needed to run the last kilometre in 3.10 to get me under the 74 minutes I was aiming for. I used the downhill and lengthened my stride.

The only thing that seemed to slow me down was my leg speed. I desperately tried to lift my knees as high as I could and not fall flat on my face. I didn’t really think that I could do it. I didn’t dare look at my watch but just focused on the finish line.

The hamstrings were starting to burn, but I could then see the timer. I still had ten seconds of time to spare and I was almost there! Second place and more importantly a new personal best (73 minutes 52 seconds). 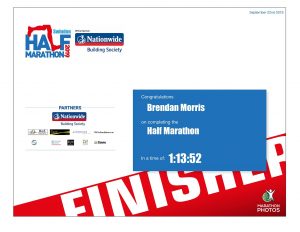 No prizes for second place. No prizes for first either! It didn’t matter, it was always about the time and the race marked the end of the hard marathon training and the transition into the taper.

Chicago is less than three weeks away and hopefully I can keep myself in one piece and maintain fitness for the big one.

*The race was won by the Wimborne AC athlete Christopher Wood in 73.44.