THE eagle-eyed among you will have noticed that the Hurstbourne five-mile race on the club championship calendar was listed as ‘by request’.

This had appeared in the champs last year, and although it is around an hour’s drive from Reading, it was so enjoyable that Tina Woffington (below) asked for it to be included again. She then forgot to enter until the day, but that’s another story! 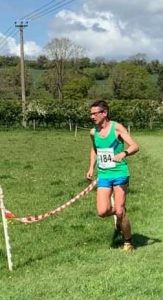 The course has everything: farm tracks, grass, uneven ground, a big hill, woodland paths (up and down hill), bluebells, fallen tree hurdles, the big hill again, more grass…. you get the picture.

It’s hilly (see profile below) and you really need to watch your footing to avoid tripping up or turning an ankle. It wasn’t as muddy this year, so most of us found our times to be a couple of minutes faster. 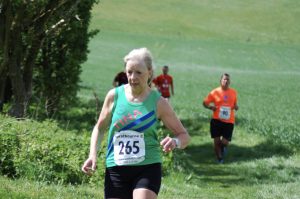 There was a good turn-out of 20 green vests, enough for a bit of friendly competition, and it also felt good to be supporting such a small event. There were 266 finishers overall.

First Roadrunner to finish was Ben Whalley (above, right), in third overall, achieving 50 points in the MV40 category. Next in that category was Tony Page, who also picked up the prize for first MV40, followed by Bryan Curtayne. 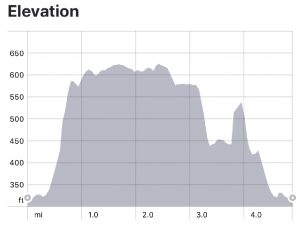 The MV50 category was as competitive as ever. Mark Andrew took everyone by surprise by by-passing the pre-race banter and turning up on the start line.

Rumour has it that he arrived early for an on-the-day entry, and then caught up on some sleep until race time. He was first of our MV50s home, bagging himself 50 points. 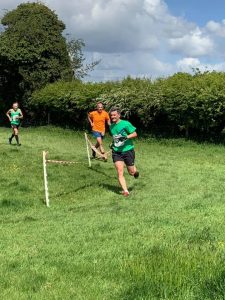 He was followed by the Davids, Caswell and Fiddes, Tony Streams (still with broken toe in-tow — that was interesting on the downhills, ouch!) and George Nyamie.

Alan Freer picked up the prize for first MV60, and with he, Andy Atkinson and Jim Kiddie being the only competitors in the MV60, MV65 and MV70 categories, respectively, each could also take away 50 points. Ben Fasham was the only senior RR male in attendance, so he too was able to take home an easy 50 points.

For the women, it was Katherine Sargeant who was first RR home, as fourth female, and first in the FV45 race category.

As far as the club championships were concerned, it is rare that Katherine doesn’t pick up 50 points, and Saturday was no exception, in spite of changes to the female age categories to bring them in line with the men’s. Katherine was followed by me and Caroline Hargreaves.

There were grumbles in the FV50 category, following the removal of the FV55s. “Where’s the incentive now?” asked Sarah Bate, as she scooped the full 50 points, ahead of Catherine Leather.

Sarah will have to take solace in the fact that not every club member takes interest in the club champs, and there’s still everything to play for.

In the FV60s, Tina Woffington took the 50 points, followed by Sandy Sheppard, while Liz Atkinson was the only contender for the FV65s. Liz had the grace of a carousel horse as she came into the finish. “That was tough,” she said afterwards to Katherine. 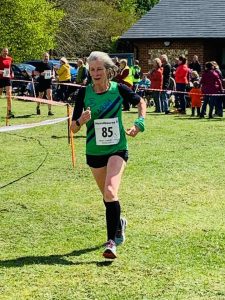 “Why would a thoroughbred like you want to enter something like this, where you could injure yourself? Leave it to us Shetland ponies.”

A great event, and with many of our runners only a week post-marathon, some impressive performances too.

The remaining five-mile races in the championship are the Marlow 5 on May 12th (also a Berkshire Road Running Championship race), and the Headington 5 on August 25th. Don’t miss out.