We’d last ran Paphos in 2015 and ran Limassol marathons a few times over the years but one thing we never expected was that in 2019 they’d each announce their Marathons within a week of each other. As Caroline’s parents live over there this was a perfect excuse to spend 10 days away and run 2 marathons. 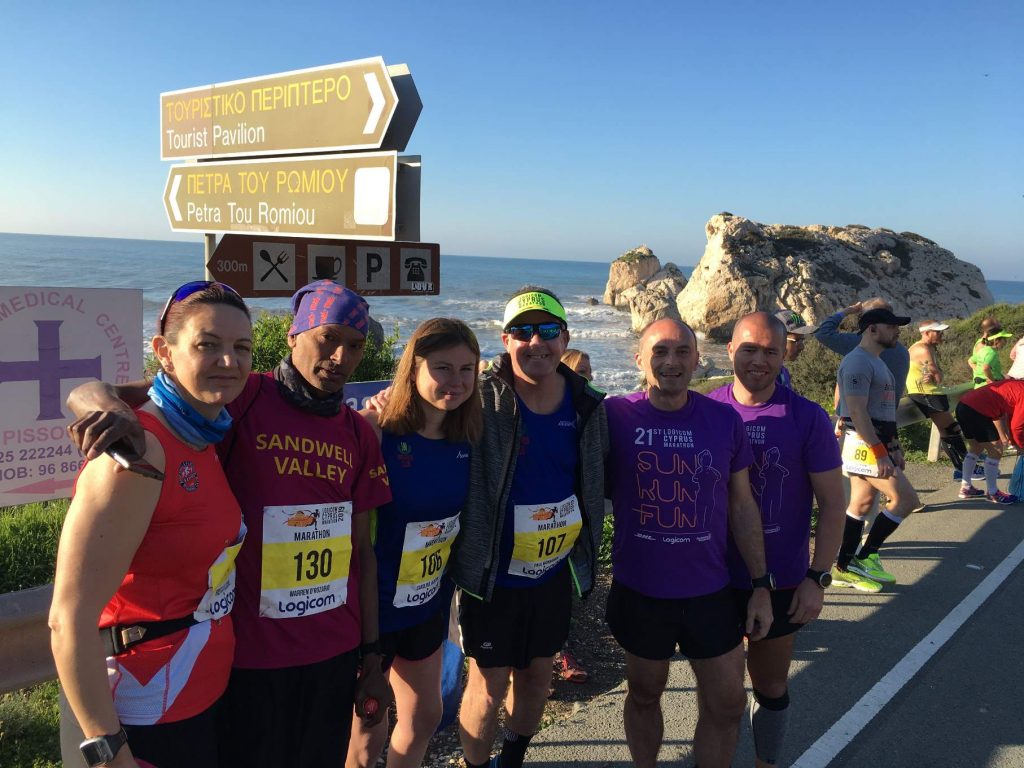 After arriving we checked in at a great hotel called Nereus it seemed tons of runners were also staying there. We got chatting to a couple at the hotel bar, the guy Clive had his eye on the big win so we chatted about marathons we’d done for the rest of the evening before being sensible and calling it an early night.

The Paphos marathon expo itself is a a lovely area next to Paphos castle & the beach and near the finish. To anyone new to the race it’s an impressive area and soon gets you I the mood.

Race morning we made our way for the coach pick up as we’d be transported about 20 miles to Aphrodite’s Rock where the marathon would kick off as this was an out and back course. I’d previously ran this in 2015 but what surprised me is just how much this marathon had grown. Three coaches were there in 2015 but this time there was a queue of about 10.

You have to be there to appreciate the start. Aphrodite’s Rock area is just stunning and as it was sunrise it looked even more spectacular. A sight to behold.

We eventually started, and although being stunning there was the slight problem of a Kilometre up hill to contend with. Caroline shot off but I knew at that moment it was not to be my day. A great race but support is sparse amongst many sections of main road leading to Paphos town. I found myself running solo on some parts but about 12 mile in at an out and back section I spotted fellow 100 marathon runner Adam Holland leading the race by a serious margin. 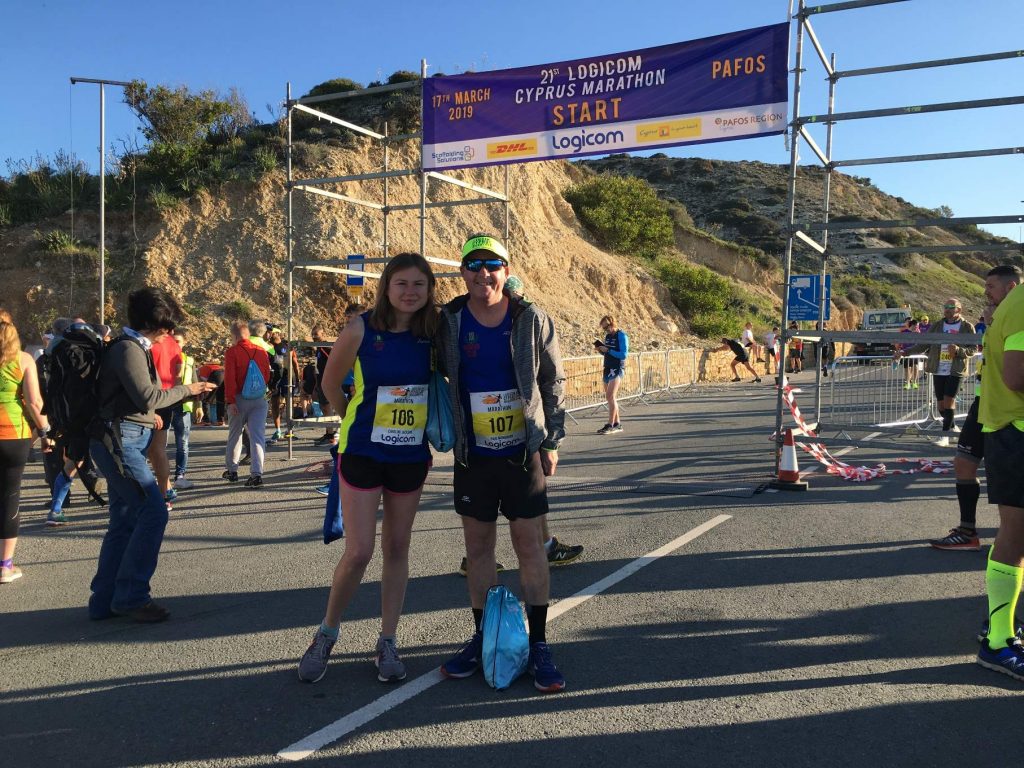 Many runners seemed to struggle with the heat but Adam Holland took first in 2:35:03. Our pal Clive from the hotel came 5th in just a few seconds over 3 hours. My lady the other half of #TeamJackMon Caroline Jackson managed 3:53.

The best part of this race is the awards ceremony. They gave out lots of age cat prizes which many of our pals picked up. Caroline only just missed out on the vet female 40. Free beer was flowing as well as a local DJ. Our friends and fellow RRs Stephen & Julie Wing had a good marathon and also joined us at the end.

Did we rest the following day? Erm not quite as we walked about 8 miles to and from Tomb of The Kings which was a welcome quiet day.

A couple of days later Caroline & I joined the local Cypriot running club West Coast Runners for about 10K around Paphos. Was one of the highlights of our stay as they were a great bunch, we’d meet some of them a few days later at Limassol marathon.

Next port of call would be Caroline’s parents in Pano Lefkara for a couple of days before heading to Limassol. A can was needed for this but as usual for us we were ill prepared which meant us walking around Paphos for a couple of hours to get the right one, one back alley place we ended up by accident was a used car, car park with prices 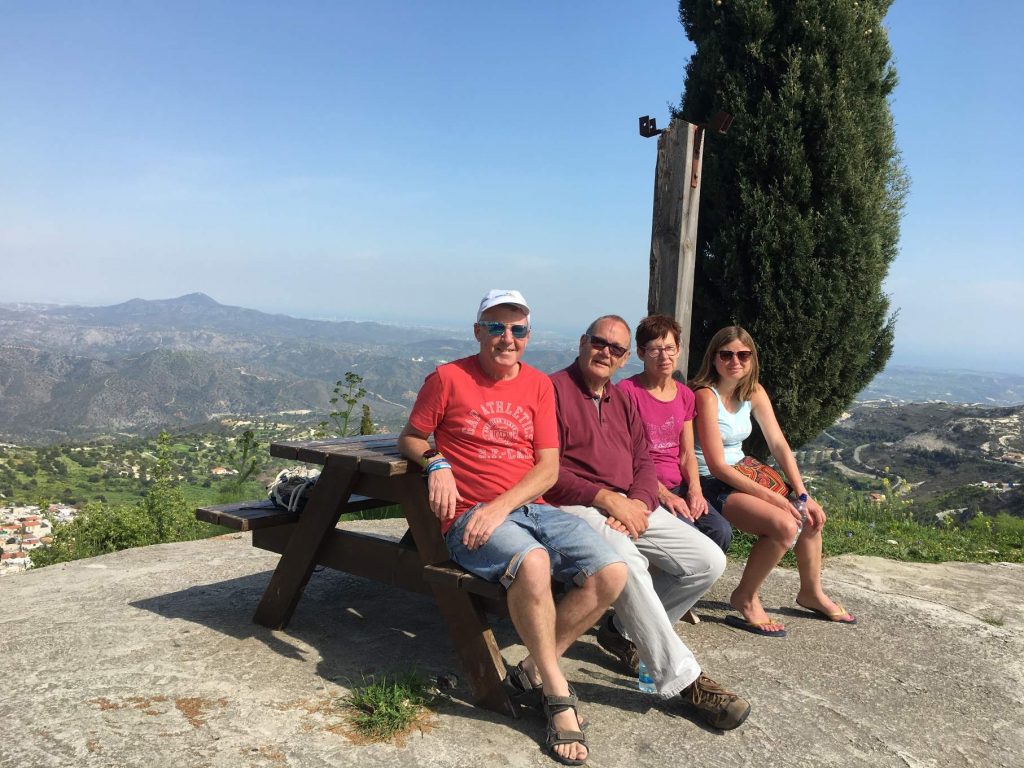 sprayed on the windscreens which we decided may be worth giving a miss, luckily we found a great Europcar garage that gave us just what we needed.

Caroline’s parents as always were great as hospitality & food were in abundance, not to mention the bottomless wine carafe her dad always produces. I really do need to get myself one of these. Pano Lefkara is up in the mountains and a stunning typical Cypriot village that specialises in linen and has managed to keep it’s culture despite the tourist buses that frequently visit. I’ve been close on a couple of occasions to buying a set of curtains whilst just going for a loaf.

They have a local running track at the village which in our wisdom decided to do about 20 laps on in the 25 degree heat. It was empty so we had it to ourselves, we even managed to  collar a local old lady to grab a few pics though 5 minutes later she returned with curtains and a few table cloths.  We did eventually manage  enjoy a ice cold local beer after our track & linen dodging session.

It was eventually time to leave Caroline’s parents so we drove to Limassol to check into our second hotel. This was slightly more out of the way from the marathon start but had great views from our balcony.

We managed to get in a few tourist sites including Kolossi Castle and the brilliant Kourion archaeological site whilst in Limassol which required a lot of walking, not really ideal for our marathon in a couple of days but well worth the visit. 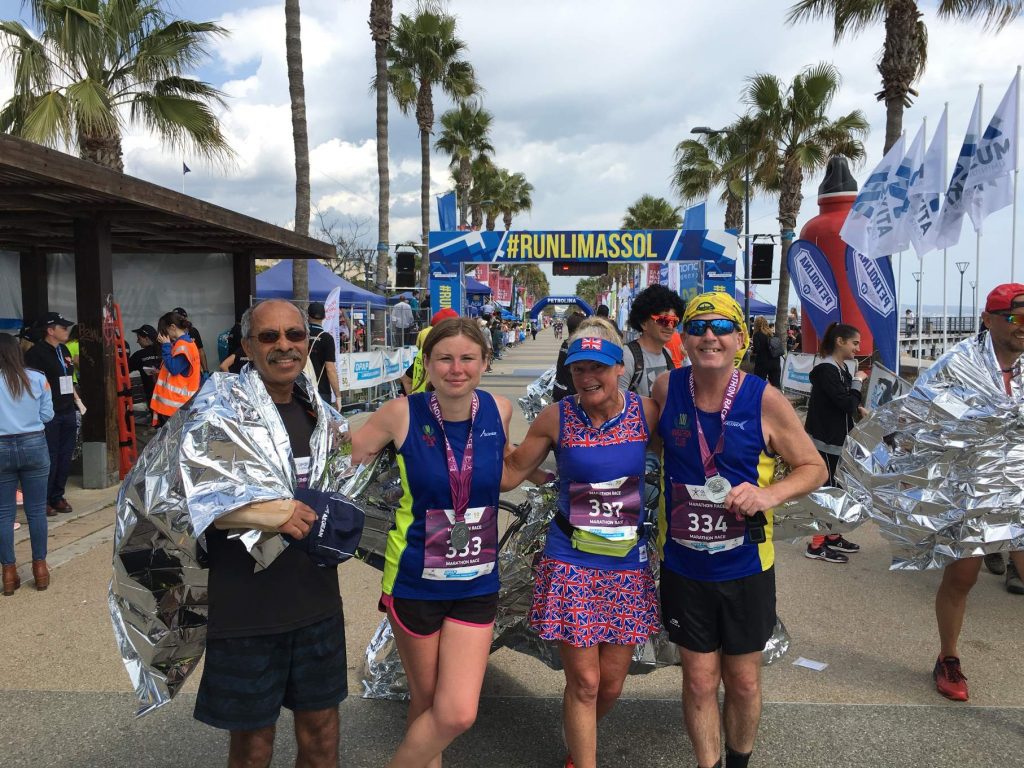 The expo on Friday was a quiet affair but the pre-race pasta party was a different matter. They’d put on the entertainment of Greek dancers doing their balancing glasses on the head routine. As the sun was setting this was great fun but the lack of lighting meant we couldn’t see how many glasses were on his head, still I’d lost count after 15 anyway. The Cypriots know how to put on great pre and after marathon shows which seem to lack back here in the UK.

Marathon morning was buzzing, as the race starts parallel to the beach surrounded by Palm trees. With the DJ pumping out tunes, this really is a mega experience. Caroline was recognised by some of the organisers as she’s won the 2015 Marathon so there was quite a few pics taken though no autograph hunters I’m afraid . 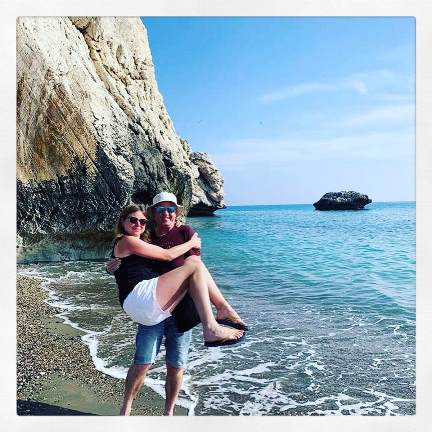 Before we knew it we were off. This year the race was in waves for the Marathon, HM and 10K meaning there was no congestion as in previous years. I was feeling a lot more up to it then at Paphos the following week so shot off at 7:15 min mile pace though just 1 mile in I had a case of the runs so shot into nearest loo. Caroline also seemed to be on better form as I didn’t catch her until 20 mile in when after seeing me she found some competitive energy to leave me for dead. This is a great course though support can lack in places. The heat and hill at about 15 mile make this tough but the scenery and atmosphere more than compensates.

I came in at just over 4 hours which was 20 mins faster than the previous week. Caroline also finished faster. Can never really run your best in these hot climates but these races were as much about the holiday as running.

After the obligatory #TeamJackMon video and a few post drinks it was time to celebrate in the evening at the Guaba Bar who organise the official race after party. Live bands, DJs etc play well on until after midnight. It would be rude not to indulge so we did the decent thing by singing along to cheesy tunes and returning to our hotel long after the door had been locked.

Cyprus as always is a great island to visit as so much more to do besides running, but take my word for it, It’s far more fun if you run. It would be rude not to.