Because of budget and time constraints it was necessary for Myself and other half Caroline Jackson, Pete ‘The Train’ Morris & Martin ‘Bushy’ Bush to fly to the Crete island capital Heraklion for the marathon which is based in Chania and a 2hr 45 minute coach ride. We’d be flying back from Chania the following Wednesday, so the most difficult part was getting there. 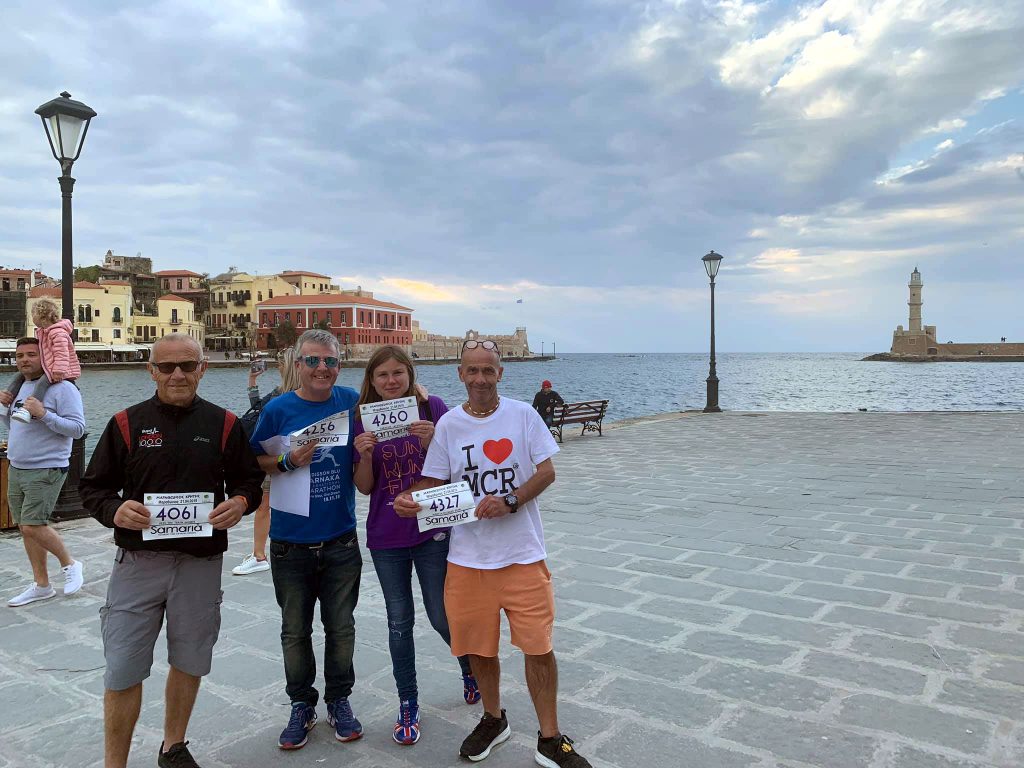 We had this worked out so we’d make it easily in time for the Chania expo which closed in the evening at 8:30, however we didn’t bargain for and hour getting through passport control and then getting off the wrong stop on airport bus to coach station. Anyway 2 hours later than planned we caught the 3:30 coach to Chania, there were no loos on board so it meant no drinks could pass our lips. Pete Morris brought on board an empty drinks cup to be on safe side. Thank god he didn’t use it especially whilst trying to hold his phone in the other hand.

The journey itself was picturesque as we were travelling through stunning mountain ranges and along the coast, though we were feeling really parched and in bad need of a drink. Not ideal prep for marathon the next day.

We got off the coach with about two hours to spare so decided best to head to Expo before checking in to our hotel. The Expo was held at the Kucjk Hassan Mosque which is the oldest Ottoman building in Crete and was a great sight. It’s on the sea harbour which in itself was impressive but typical of a Greek island. There was also a lighthouse on the sea front which made for quite a few good photo opportunities.

Inside the Mosque was a photo exhibition but Bushy looked far more impressed with his free towel and t-shirt in the goody bag. He prob has enough towels him 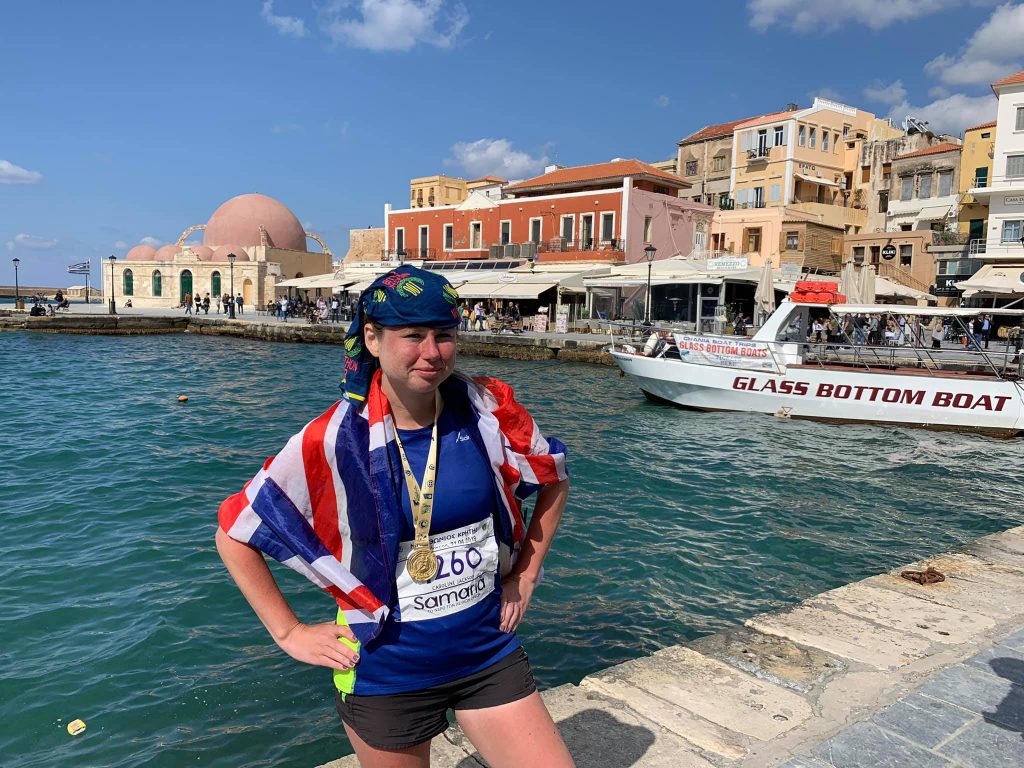 self to dish out to every runner and enough marathon t-shirts to clothe the island, but that’s never stopped him collecting them (I won’t go into his medals)

We finally got to check into our hotel which was great as we had a roof terrace. One thing I never knew about Crete is there’s an ice tipped mountain range within sight, so it made for a great view from our terrace, mind you saying that, it was 25 degrees in the UK at this time but only 18 in Crete. Always nice to think you’re getting money’s worth weather wise but guess we’d missed out this time. A case of unusual high temperatures back home.

A pre-marathon Torch carrying relay was due to finish at the marathon start area so we headed in that direction to see what it was about and also hook up with some 100 marathon club pals. As we arrived there were about 15 torch carrying toga wearing guys just entering the area. After a pose for pictures they lit an Olympic style cauldron which was an impressive sight especially as it was at night. After a few speeches in Greek a band then started playing. It was an amazing buzz that got us right in the mood for the next day

Whether it’s placebo effect or not, I think it divides opinion but regardless we headed to an Italian restaurant to carb up for the next day. Easy enough for Caroline, Pete & I, but Martin ‘Bushy’ Bush always has a few issues with food and is quite happy just eating chips. He’s also not a big fan of cheese so pizzas usually need to be minus the 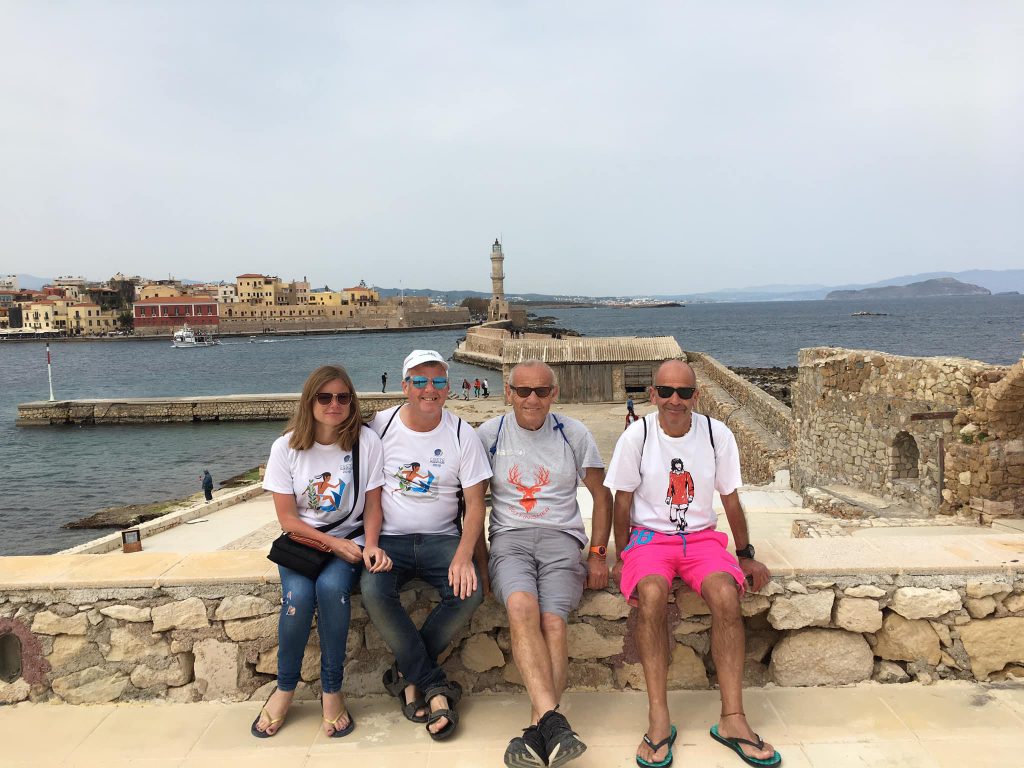 cheese.  Anyway, he ordered plain pasta but the waiter brought it and explained how the chef had covered it in a lovely spicy tomato sauce he would enjoy. WRONG!! That was not all, his garlic bread then came with lashings of cheese WRONG!! Poor old Bushy had to send 2 dishes back but by this time we were eating at 10pm. Luckily Caroline & I were not taking this marathon serious and would run together taking pics. London was looming so not a good idea to push yourself the week before. Anyway, Bushy was finally happy and it did give us all a few laughs. I kind of like chaos especially on holiday, so right up my street.

The next morning was the marathon so we were up early and grabbed a bit to eat before our 10 minute walk to the start. But hey, where was everyone? The place was empty except for about 20 officials and runners. We spent the next 45 mins in and out of the loos as was a novelty not to queue for a change, so decided to take advantage. Then 20 mins before the start about 400 runners turned up, definitely not quite as laid back as we’re used to but a refreshing change. That was not all, as at 9am race start time there was about 10 mins of passionate speeches (all in Greek of course) as 400 runners all raised their right arm. I’m sure I heard the words TeamJackMon, Bush & Morris mentioned but I could have been mistaken. Anyway, 10 minutes later than scheduled we were off.

The scenery on the route was something else as it started along the coast, though not many supporters as guess 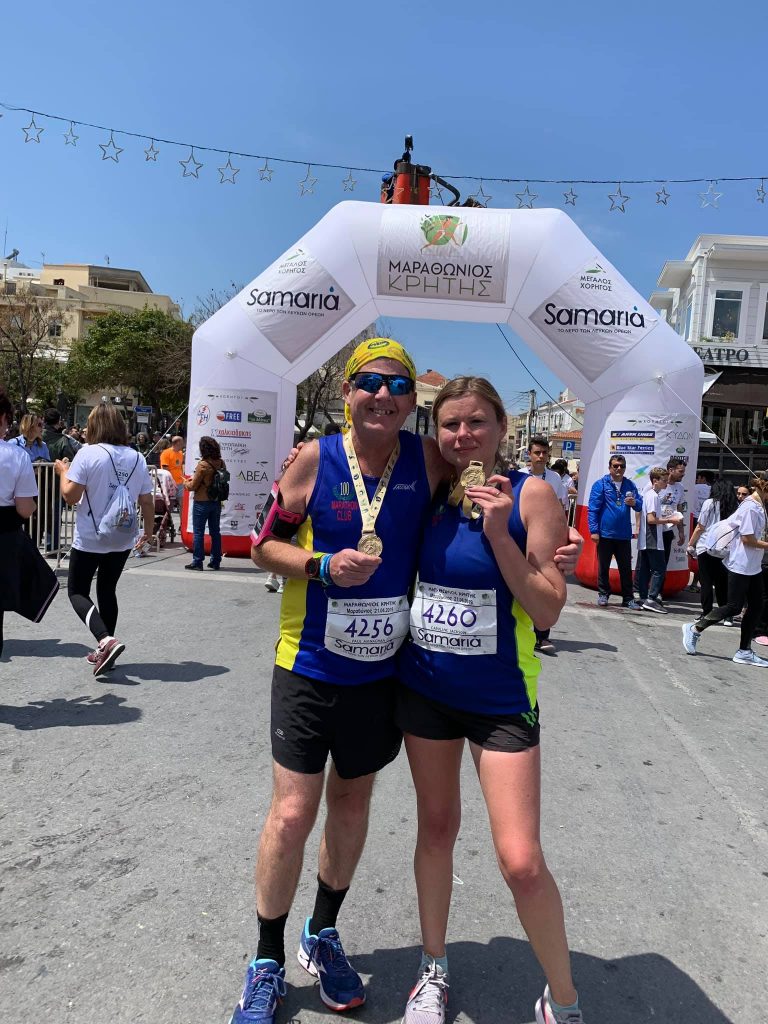 they were busy getting ready to support the kids 10k which would start in 4 more hours.  Caroline & I decided to run together, take this easy and enjoy, and that is exactly what we were doing. It was an out and back route and before we knew it Bushy was overtaking us.. For him no magnet shops or photos during race today for some reason. The sniff of beating us may have been a factor 😊. We eventually saw Pete who looked far more interested in his phone then the scenery. Must be some phone, that’s all I can say.

It was an out and back route and support gradually improved as we hit the towns. Mind you so did the traffic and became almost unbearable for us during second half, though must add that the marshals did an amazing job controlling it under the circumstances, and with a smile.

We were having fun running this but eventually all must come to an end. The last few miles were really undulating and to our surprise during last mile or so we had the kids 10k runners all walking along the same route to the finish line, It was a nightmare getting around them and if you were going for a time it would be out of the question. However, the finish was a party atmosphere despite the congestion, and we were glad to eventually finish running in intense heat. I’d recommend this marathon for the scenery and atmosphere but if you’re seriously thinking of a time then probably not ideal. Bushy had managed to finish before us and had a great run considering how many marathons he’d just ran. Pete was also not that far behind us and told us he really enjoyed the course.

The next day we stayed in Chania and decided to visit the lighthouse via a route paved with broken rocks. This was nearly as difficult as the race but great fun. After we struggled to reach it we clocked a group of local ladies who must have been older than the rocks, sitting near it. As far as I can gather, they must have had jetpacks hidden o 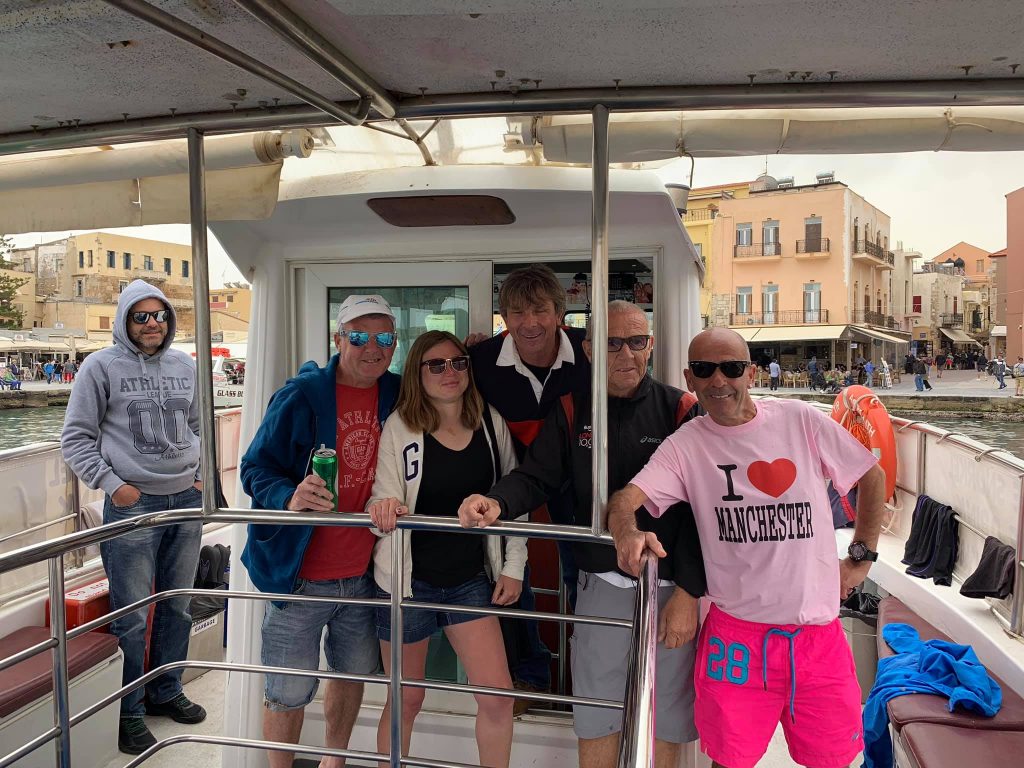 No trip to a Greek island would be complete without a boat trip and Captain Nick with his glass bottomed vessel was glad to oblige. It was choppy and cold at sea that day, but he went out with around 10 of us regardless. We even all had a go at steering the boat. Pete Morris managed it with one hand whilst holding phone (I’ve recommended a surgeon who may be able to detach it from his hand) and taking selfies in the other. Got help us if we had of hit a storm. Even in the cold-water captain nick swam out and attached bait to the bottom of the glass so we could witness some cool looking fish feeding. We had the option to swim but Pete said his phone may leek, so we gave it a miss. Besides, it was not the warmest of days.

Nice local Greek restaurants are plentiful in Chania especially down the side streets. It’s real friendly 5-star service. If tacky British bars on every corner aren’t quite your thing or you prefer a more cultural trip, then Chania in Crete delivers, even if it does have its fair share of tourist souvenir shops. We found it similar to Seville or San Sabastian 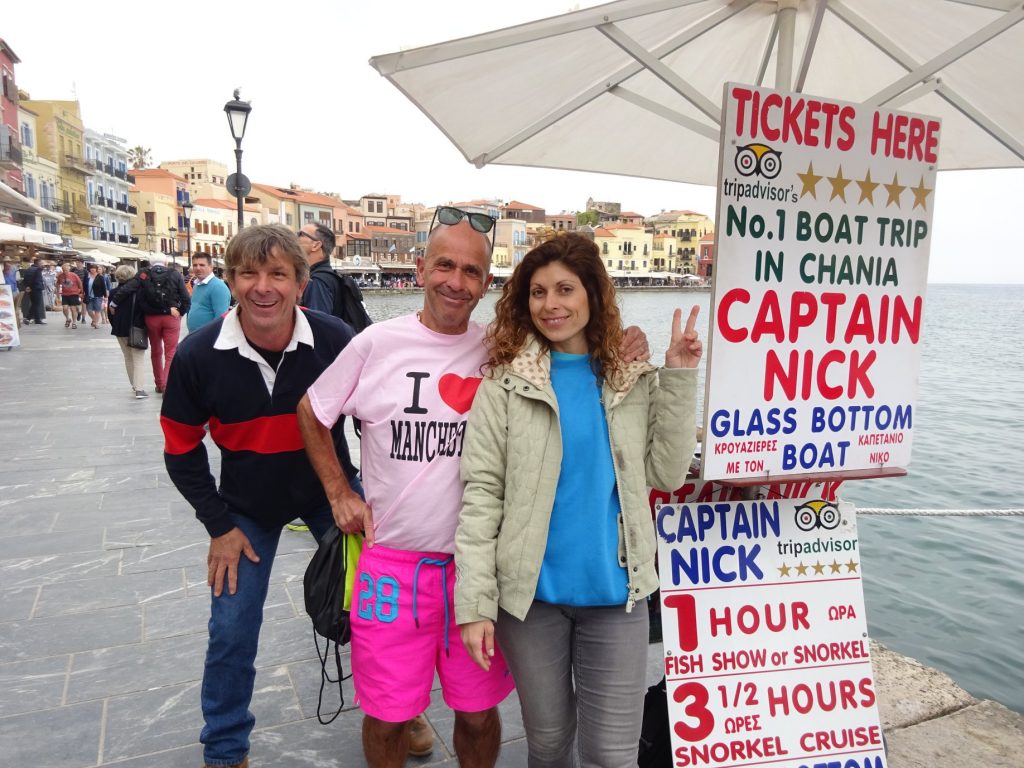 if you’ve ever visited. We even had Martin trying stuffed vine leaves rather than his usual chips, so I guess that says it all.

Will we be back? I love the Greek Islands and will find any excuse to go especially if there’s a marathon. We plan on returning to Rhodes next year, if only for the awesome pre marathon pasta party, but I’m sure we’ll be back to Crete soon.

If you fancy joining us on any races abroad then visit are Runners on the Road section on our website or give Caroline & me a shout.  All are welcome.