CHAUFFEUR, head cook, team organiser, runner and race report writer… SAM WHALLEY covered the whole gamut of jobs on the first weekend of the summer relay season. Here’s her report from our ladies’ trip to the Midlands…

IT WAS Helen Pool’s idea to try and get a team together for the British Masters Road Relays at Sutton Park, so we have her to blame/thank.

An email was duly sent out to all women of an appropriate age, and we were delighted to have replies from seven who were both interested and available.

Team entries are based on the number of runners anticipated in each ten-year age group; V35 teams needed four runners, while V45, V55 and V65 teams only required three.

The age spread of our women was one x35, five x45 and one x55, and with runners allowed to run in a younger age group but not an older one, we had to be organised into a V35 and a V45 team, with our three strongest runners put into the latter. 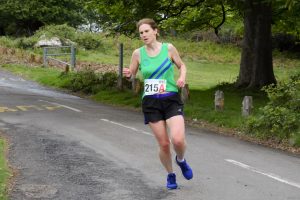 Disaster struck on the eve of the race, when Katherine Sargeant’s iffy hamstring was deemed unsuitable for the task of running 5k.

This is when it would be really good to have a pool of reserves to call upon at very short notice. Alas, we had no such pool, and runners were only allowed to run once, for one team.

Nevertheless, we were all still keen to run, even with an incomplete team. Indeed, Claire Seymour was already halfway through her mini-break in Birmingham, and raring to go.

We were thankful for our 7am departure for Sutton Coldfield, when, for reasons best known to herself, the designated driver (that was me) veered off the blue line indicated by the sat nav and then missed the first exit that would have set us back on the right track, in favour of a half-hour detour down the M6 and back up the other side, in the average speed limit stretch, no less.

I can neither repeat in print the words that emerged from my mouth, nor apologise enough to my passengers. 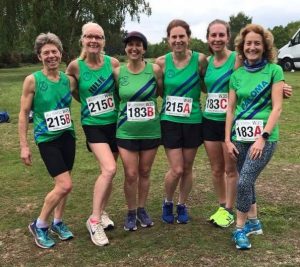 In spite of this brain malfunction, we arrived with the desired hour to spare, enough time to put up the tent, update our team declaration sheet, and prepare for the race, with the leg one runners on the start line at 10.30.

Helen Pool and Paloma Crayford did the honours for leg one, with Helen keen to beat her big local rival, and Paloma already chuffed to be trying something out of her comfort zone.

With this being an undulating one-lap course, the first runners were due back after around 18 minutes, pretty swift for senior female athletes, let alone masters.

The changeover line was a serious business. We were called from the holding pen in order, as our incoming runners appeared halfway up the finishing hill — oh yes, it finished on an uphill, why wouldn’t it? — and were told not to waste time looking behind us, as we would be given a three-second countdown and a tap on the shoulder when they had crossed the line.

This made me feel really nervous, and fearful of a false start. Lesley Whiley had already been told off for only having two pins on her numbers. 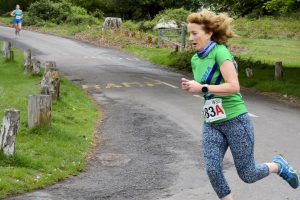 Helen was back in sixth place for the V45s, in 21:31, ahead of her nemesis — yes! — while Paloma felt the benefit of the inevitable leg one speediness and ran a fantastic 24:36 for 26th place. Had Paloma been running in her actual age category, this would have been 15th.

Lesley and I took the metaphorical baton for leg two. With numbers worn front and back, it should have been easy to see who we were racing against.

From a personal point of view, those age group numbers needed to be quite a lot larger for me to be able to see whether someone was in my race or not, given that everyone had spread out so much over leg one, but as with any team race my aim was to run as fast as possible, not lose any positions, and pick people off if I could.

Such was the nature of the course, that splits were somewhat erratic, and, while I felt like I should have been able to run faster, I was pleased to not lose any places — phew! — and come in at 25:16, while Lesley, running in an age group one below her own, slipped one place, courtesy of second-claim runner and former Reading Roadrunner Sarah Urwin-Mann.

Lesley was still the eighth fastest V45 runner over this leg, with a great time of 23:43. This would have been the 12th fastest time of the day in the V55 race.

Lesley and I handed over to Julie Rainbow and Claire Seymour, respectively. Julie, who is in fantastic form at the moment, achieving PBs in some distances for the first time in many years, ran an excellent leg, the fifth fastest V45 time in that leg, with 22: 41, and brought the V45 team home in seventh place.

Claire also had a great run, in 25:35, and gained one place, with the team finishing in 25th after the three legs. 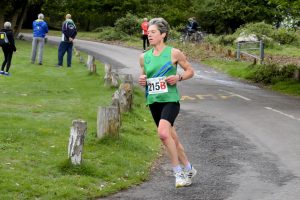 As an incomplete team, however, we were then left hanging, with no final position listed, but could be pleased with our performance, and that none of us had got caught by the V55s or V65s, who had set off five minutes after us.

A relatively uneventful journey home had us brushing with travelling Manchester City fans and discussing the best marathon training plans, but mostly involved refuelling with sandwiches, salads and home-baked goods from Paloma and myself. See what you could be missing?

We all agreed it would be a brilliant event to have on our regular race calendar. Note: You can see a copy of such a team race calendar on the noticeboard at Palmer Park.

Later, Lesley reflected on her best performance at the very same road relays, back in 1999, when she ran 17:57, and the Reading Roadrunners V35 women won the prize for second team — wow! Something for the speedier veterans among you to aspire to, perhaps?

In the meantime, we will most definitely be back.