GLOBE-TROTTING runner-writer ANDY ATKINSON follows up his dispatches from Berlin, New York, Bilbao and Verona with this report from the Paris Marathon…

QUESTION: What activity do you come out of feeling worse than when you went in?

ANSWER: Not running a marathon, but going to the doctor to ask for a medical certificate to run one!

The French ask for conformation from a medic prior to allowing you to enter the Paris Marathon and I went into the surgery confident that this would be a formality.

After much sucking of teeth and comments about high cholesterol and blood pressure my doctor said no! She would have to get confirmation from the senior partner before risking a signature on the form.

Fortunately, it turned out that the senior partner is a parkrunner and after a few questions and agreeing to appropriate medication I was in.

Liz, my wife, had similar problems — her doctor flatly refused to take the risk and sign the form, leaving her to find a more enlightened medic at a bureau in Paddington. Charlie Macklin submitted the form all right, only to have it thrown out for having the wrong wording. It turned out that the words were right in the end, but this only came clear on collecting bibs at the expo.

The medical certificate obstacle surmounted, a small group of Reading Roadrunners independently took the Eurostar to Paris. We consisted of David Walkley, Charlie Macklin, Anthony Eastaway, Liz and myself, supplemented by our neighbours, Joelah and Linda Flintoff.  Unfortunatley, Sev Konieczny was unable join us, but her sister, Véronique Chalmandrier ran in support. 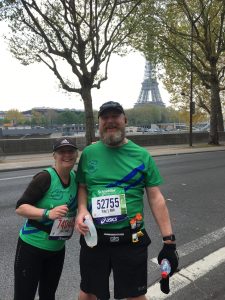 We also had the backing of supporters in Paris — Anthony’s husband Jeremy and Charlie’s children, as well as the warm good wishes of a large number of Roadrunners following us back home on the event app.

On the eve of the race Anthony, Jeremy, Liz and I ventured to the top of the Arc de Triomphe to view the start and finish of the course, while Charlie opted for a view from the Eiffel Tower. We also managed an evening rendezvous to enjoy a meal together and talk race strategy before retiring early in preparation for the next day.

Weather on the day was ideal for running — cool to the point of being cold, bright and sunny. The course is flat and fast, provided you watch your feet on the notorious cobbles and can squeeze through streets sometimes alarmingly narrowed by pressing spectators.

But you don’t run Paris just to get a personal best… the course takes in all the major tourist landmarks of the city.

We started in the Champs Elysees, passing L’Opera, La Bastille, through the Bois de Vincennes, back past Notre Dame, the Musée d’Orsay and the Tour Eiffel. 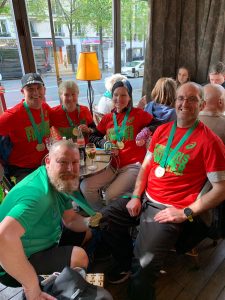 The last five miles is a tough slog through the Bois de Boulogne, but relieved in the end by the sight of Frank Ghery’s magnificent Louis Vuitton building. The finish culminates along the Avenue Foch in front of the Arc de Triomphe — a fitting end to an exhilarating tour of the town.

We all felt we had good runs, and caught up afterwards to compare notes over a beer or two. David in particular turned in a well-deserved PB at 3:40.46 and Charlie was very near her best at 4:23.18.

Anthony ran a solid 5:49.36 and Liz, relaxed as ever, cruised in at 5:41.14, just under two minutes behind her PB scored at Berlin last September. Véronique achieved a creditable 5:17.46.

As for me, I was pleased, not so much with the time of 4:34.24, but with my state at the end — managing a strong finish and a little sprint over the line with a noisy squad of ‘London to Paris’ marathon-running nutcases pulling me along. 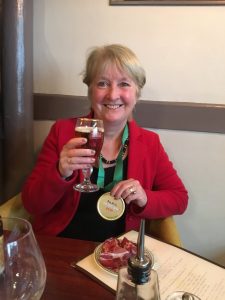 After the run, most of us stayed on to do a little sightseeing and relaxing. Paris can be an expensive place to eat and drink, but once you get the feel of the city, not really any more than London. Liz and I certainly enjoyed visiting some new sights and discovering interesting cafés and restaurants.

In common with many great cities, Paris has a fantastic metro system and it is easy to get to most landmarks, so it is a good place to combine running with tourism. We saw some signs of gilet jaune damage to the shops in the Champs Elysees, but there was no trouble.

Much more distressing was, as we left, the reports of the fire at Notre Dame. Television pictures of the fire and the distress of Parisians were very moving, but I have no doubt that the resilient French will bounce back and soon have this eternal monument restored.  Overall a great race and I think a few of us are keen to return next year.