IT’S 3.30am local time and I’m wide awake lying in our hotel room in Boston. Yesterday I ran the Boston Marathon in a time of 2:47.50. It was a time that I was quite happy with and celebrated accordingly afterwards.

The trouble is now that I’m rather uncomfortable. The hangover is bearable,  but not pleasant, the muscles in my upper legs are particularly sore, but the worst thing is, I need the toilet.

This will be the third time that I would be going during the night (an issue with maximum rehydration after a marathon). The first time, my left leg gave way underneath me completely and I ended up in a heap on the floor and crawled to the ensuite. 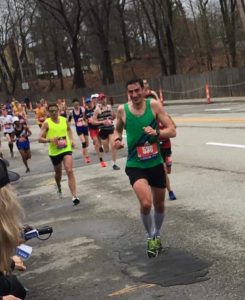 The second time, I made so much noise groaning in pain that I woke my wife up and she was less than sympathetic.

So I’m now weighing up the options available. The most attractive one seems to be to wet the bed, but I think the most acceptable one will be to attempt to roll out of bed into the floor quietly and then once again crawl to the toilet and muster up the strength to stand, then hobble back.

The prestige of the Boston Marathon needs no introduction. It’s an event that is on many amateur runners’ bucket lists, with a difficult qualifying time and no opportunity to run it otherwise, making it a race to aspire to. The city seems to have embraced this event with open arms as well, with the locals generating a great atmosphere throughout the marathon weekend.

Upon signing up to run Boston, my initial thoughts were… “it’s that marathon with a hill in it.” After running it, I think it would be better described as “the marathon with one flat bit in it.”

The more I read about the course in the build-up to the event, the more it started to worry me. “Though it has a net drop in elevation, do not let that fool you into thinking it’s a quick or easy course.” This was just one of the cliche-type phrases that I read and in hindsight all of them seemed to have been true.

Another element to the Boston Marathon is the unpredictability of the weather conditions and this year did not fail to disappoint. As myself, Gary Tuttle and Grant Hopkins sheltered from torrential rain in a marquee, wearing ponchos and bin-liners around our feet, we spoke to a local runner who had done Boston “around ten times”. He claimed that your finishing time in Boston can’t be compared to other marathons; it’s a different kind of beast.

He said you cant even compare your Boston time to other Boston Marathons as the weather each year is so different. Again, more cliches that rang true.

This year they had initially predicted heavy rain throughout and for it to be cold. It was actually pretty mild in the end and the rain had passed by before the race started. The real issue during the race was the humidity to begin with and I would say in the final stages it felt pretty hot as the sun came out.

The crowds along the course were great. Again, the area seems to have not grown tired of this event but to relish in it. Lots of unofficial feed stations, water stations, live music and co-ordinated cheerleading had been set up and in true American style they are unapologetically loud and bold. The Wellesley scream tunnel left my ears ringing and the last couple of miles in Boston proper were incredible.

My build-up to the race had been hampered by a foot injury. I was only able to build up to the distance slowly and was not able to put in the amount of training I would have liked. I could only manage four runs greater than the half-marathon distance, which for me is not many (London and Berlin ten runs of 18 miles-plus).

So I was looking for a decent performance in the region of 2:50.00 but wasn’t going to be too harsh on myself if I only managed sub-three hours. My tactic was to run comfortably on the downhill stretches, not slowing myself down, then respect the uphill sections and not put too much effort into attacking them. I thought this would leave me good energy to finish strongly in the last five miles, which are pretty much all downhill.

Unfortunately this didn’t seem to work as well as I had hoped.  A lack of long hilly runs in my training meant that around the halfway mark my quads were sore and I could feel my hamstrings tightening.

This seemed to coincide with the temperature increasing and I knew it was going to get tough in the second half. I made a decision at that point to stop looking at my pace and concentrate on feel.

I still respected the hills through Newton (a series of four inclines culminating in the infamous Heartbreak Hill) and took them steady in the hope that I could run strongly in the final stages.

The course had taken it’s toll on my upper leg muscles though. By the top of Heartbreak Hill I was in agony. My legs couldn’t turn over quickly enough to take advantage of the last downhill section. In fact i was cursing the downhill parts by this time due to the pain.

The last five miles became “let’s just finish without walking” mode. I was in a world of pain by the time I got into Boston proper, but the crowds and a runner who I was keeping pace with really spurred me on. 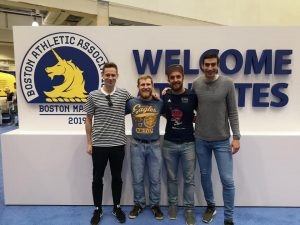 I snapped out of my defeatist mindset in the final stages and suddenly realised that I was still on for a good time. I gritted my teeth in the last mile and tried to make sure I ran under 2:48, which I managed.

It was a tough race. I would like to tackle it again with more specific training and higher volume. Considering the conditions and lack of preparation I’m happy with my time, the injury was fine and it gives me good confidence going into Chicago in the autumn.