ROADRUNNERS have nominated Rob Corney for a prize at the 2019 Reading Sports Personality of the Year awards. 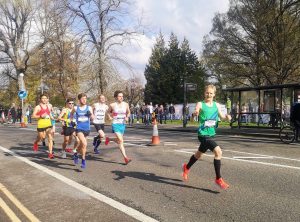 The club’s announcement comes a few days after he took a stunning eight minutes and 15 seconds off his own club marathon record when he finished fifth in the big race at Brighton.

It’s not clear yet whether Rob’s nomination comes in the ‘achiever’ or ‘improver’ categories, but he’d look a good bet to win both. He’s certainly improved a few times on the club honours board!

Club chairman Phil Reay – responsible for Rob’s nomination from his role of mens’ captain last year – said: “I’m running out of superlatives when talking about Rob. It’s not just his speed which is impressive, it’s the way he goes about it. He leads by example with his strong work ethic and is a role model to all at the club and the town’s running community.” 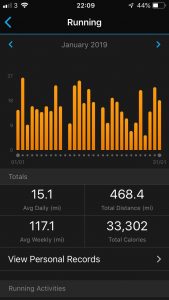 Corney’s astonishing time of two hours 19 minutes and 12 seconds in one of Europe’s principal marathons has started people talking about the possibility of our man being called up for international honours.

The England marathon coach, Nick Anderson, was impressed by Rob when he took some Roadrunners training seminars last year and was at the public address announcer at Brighton, so he was able to witness his current form.

The Woodley flyer will be 33 at the time of the next Commonwealth Games in Birmingham in 2022, while Bournemouth athlete Steve Way was 40 when he represented England at the 2014 Games on the back of a 2:16 qualifying time.

Corney said: “I don’t know about international call-ups. I think I’d need to go a couple of minutes quicker at least. There’s a lot of very fast runners on the scene at the moment. But never say never.”

Corney will be joined at the Reading SPOTY awards gala dinner by ladies’ nomination Gemma Buley, who kicked off the Roadrunners’ PB-fest at Brighton with a brilliant 37:20 in the 10k race which preceded the marathon. 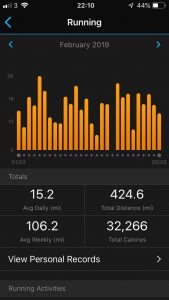 That race featured a welcome return to top form by Jack Gregory, whose best time for four years, 31:51, suggests he could soon threaten Corney for the club No.1 spot at that distance.

The other half of Gemma’s Mr-and-Mrs PB club, husband Chris, made a triumphant return to Brighton, where he debuted at the distance last year.

Another Roadrunner to boast an 18-minute PB was Sarah Richmond-De’voy, who ran 4:38.27, while Simon Brimacombe ran 3:47.55, a 13-minutes improvement, and Clinton Montague hacked an ever bigger margin, 26 minutes, off his previous mark with 3:39.47.

Bragging rights of the day, though, went to Vince Williams, whose 3:40.08 represented a 27-minute mark-up. 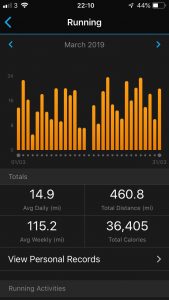 There was no PB on the day for Sophie’s mum, Caroline, just the consolation of victory in the 50-54 age group by almost half an hour and the knowledge that she had clinched her third international vest at different distances. 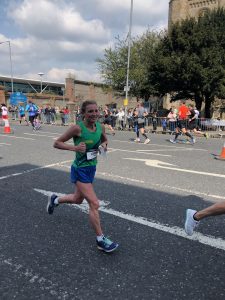 Despite missing eight weeks’ training in the winter through a hamstring strain, Carrie was 11th lady to finish in 3:00:54. Her training partner, Alex Harris, was second Roadrunner to finish in 2:57.52.

So, a great day at the seaside for the club and returns on their efforts for those who did the training. Those who wonder whether all the winter miles are worthwhile should have a study of Rob Corney’s Strava output for three months before the race.

Anyone else do half that training? No, me neither.