LADIES captain Sam Whalley has once again been competing on the XC circuit and then scribbling from the Press Box. Here she files on another golden day for the Roadrunners…

AFTER he won junior gold in the European Cross-Country Championships, Jakob Ingebrigtsen said: “It was a tough race. I have never done anything like this before, and it’s fun to compete in these conditions.” 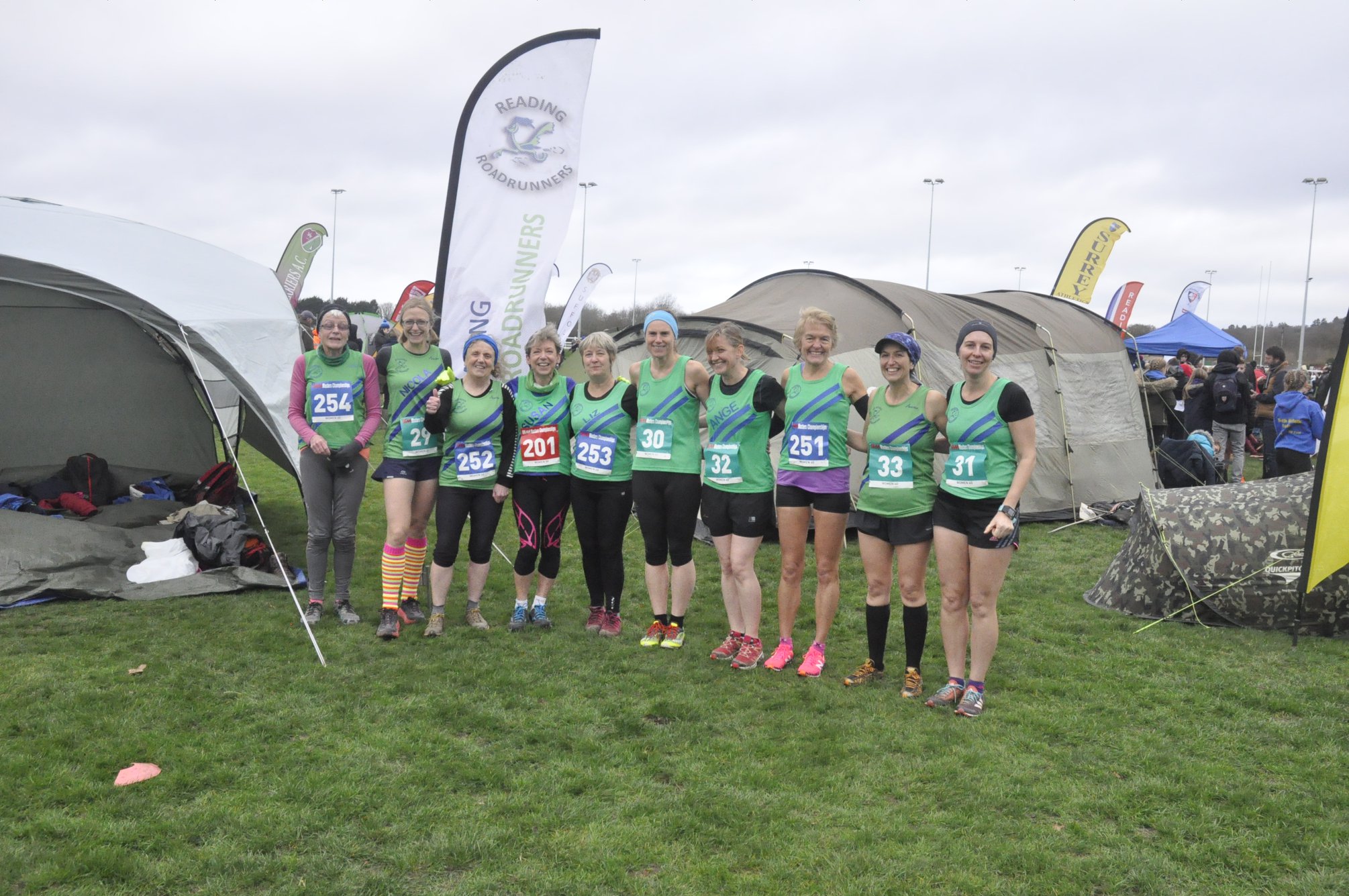 Conditions? Well it was raining a bit. But tough? The young Norwegian would find more than a few twists and a couple of logs in Prospect Park or Parliament Hill, or even at Horspath in Oxford, venue once again for the SEAA Masters XC Championships.

I bet he hadn’t had to erect and dismantle an event shelter in gale force winds either. (How many Reading Roadrunners does it take to put up a tent on a windy day? As many as you’ve got. This was seriously one of the hardest things I’d had to do all year).

Anyway, there are some of us who love racing in these championships. There is something appealing about being in a race where everyone is over 40. The chance of getting lapped is lower, for one thing.

For others, though, this is just one race too many in a busy competition calendar, and with December already busy for most people, we did not manage to field full teams in all of the age categories, which was a shame. 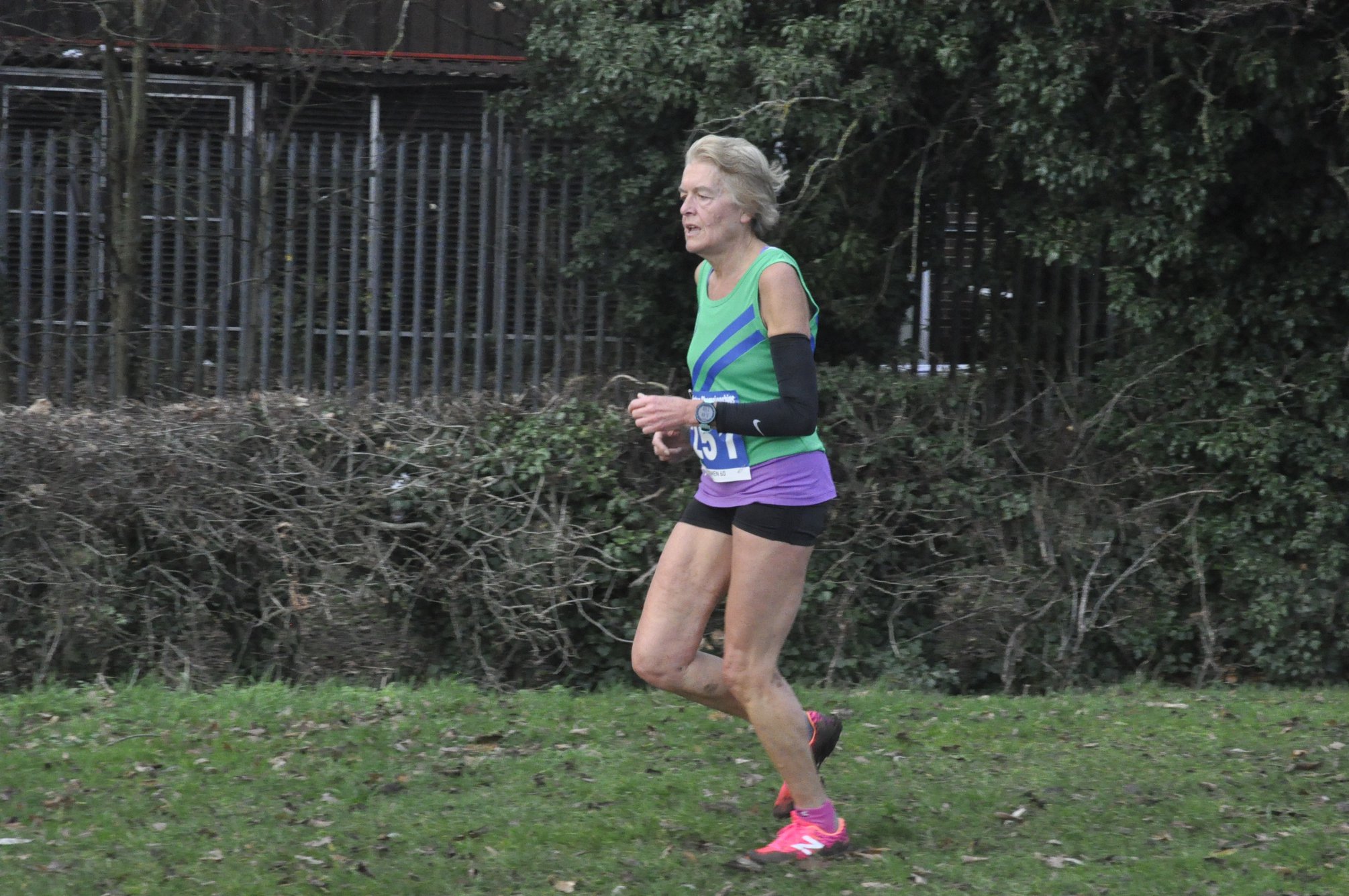 We were also missing a couple of runners on the day, with Sarah Dooley and Jim Kiddie having picked up injuries the previous week. Thank you, Sarah, for coming to support us anyway — so nice of you!

As part of my recruitment campaign, I had billed this as one of the flattest courses we run. I did half-heartedly look for a course map when I arrived, but assumed it was probably unchanged.

Oops! After we crossed the first field, we were shown right instead of left. Something was amiss — we were heading towards the hilly woods! One and a half laps of the hilly woods, in fact; I felt bad for those running the race for the first time.

“This is a completely different course,” I said to Nicola Gillard as we climbed the first hill, so she would know I hadn’t deliberately misled her. We now knew something about the course that the men would run too, although they were to do an extra lap, with 10k to our 6k.

XC stalwart Cecilia Csemiczky said afterwards that she preferred the course; negotiating woodland, grass, ups and downs made for a more interesting race, with some runners less strong on the technical parts. It was certainly less straightforward than in recent years, and I was pleased to be able to take advantage of a close competitor taking a wrong turn. I did call her back. Honest…

I usually report results in the order that the races occurred, but there was no bling to be had there, and we want a big finale.

Suffice to say, there were 225 men in the race, and the scoring team of Peter Aked, Mark Andrew and Tim Grant was 25th. These were all over-50s runners though, and they fared better among the over-50s, being 18th team. Colin Cottell and David Fiddes, the latter having just recovered from a cold, completed the over 50s team.

Bryan Curtayne was our only over-40 runner, although he seems to be missing from the results at the moment, while Alan Freer and Andy Atkinson had good runs for the over-60s, with Alan in 20th place, out of more than 50 over-60s runners. This is a championship for the whole of the south of England, don’t forget. Well done, everyone!

It was the women who really shone this year, though. There were 125 in our race, with overall scorers Jane Davies, Helen Pool and Angela Burley bringing the scoring team home in seventh.

Two of these were over-40s, with Helen being 17th over-40 out of 49, but they needed one more to score for their over-40s team. That was me, and that team was sixth. Nicola Gillard and Claire Seymour ran well, and completed the over-40s.

We only had one over 50s runner, Susan Knight — who is continuing her excellent form. Well done to you all, and hope to see you in the mud again soon.

I’ve saved the best — over-60s women — until last. Dubbing themselves A Hare and Three Tortoises, the team was made up of the superfast Jane Davies, new marathoner Liz Atkinson, ultrarunner Kathy Tytler, and regular Cecilia Csemiczky, who has begun to feel a bit hard done by as an over-70 with no over-70s category to run in.

In recent years, however, the women in this age category have either picked up team medals, or almost picked them up, missing out by only a point or two. We knew then, that with the just-turned-60 Jane on board, their chance of a team prize was high. And we were right, as they collected the team bronze, a great result!

Even better though, and a surprise even to herself, Jane proved that she was the fastest over-60s female in the south, with an individual gold medal.

We have said it would be useful in these races to have numbers on our backs as well as fronts, and this is why — Jane was 27th overall, but obviously did not know the age categories of those ahead of her.

As captain I could not be prouder of this amazing woman, and hope it is the first of many over-60s awards to come. She and the rest of the team are an inspiration to us all. Again, well done, and thank you for making time to run for the club.