ON a weekend when most Roadrunners were wallowing in cross-country mud, three of our club-mates were competing in sunny Spain. One of them, Liz Johnson, has sent us this report from the Valencia Marathon, where David Clay produced a stunning personal best…

RUNNING a marathon isn’t easy. Many people train for months to be at their best on the day (you crazy 100 Clubbers aside) so if you have a marathon booked in for early December it is maybe not textbook training to have completed another marathon six weeks before, Matthew Brown, or tackled Ironman Wales in September, David Clay…

Anyway, that was the situation Matthew and David put themselves in before the Valencia Marathon. 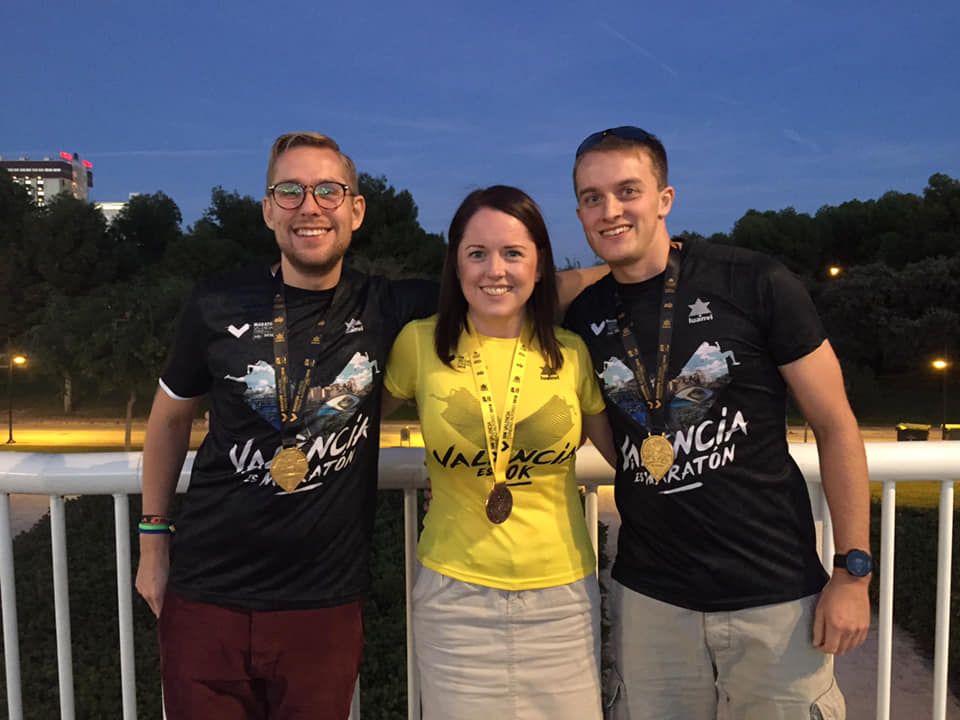 I, being a bit of a magpie and liking all things shiny, was a tad more sensible and satisfied my need for race bling by entering the Valencia 10k, which takes place at the same time. It also allowed me to return to my previous calling of professional marathon support/cheer crew.

Nestled on the eastern coast of Spain, Valencia is a compact, and flat, city that is an eclectic mix of old and new. The temperatures in early December are a balmy 18 degrees and it’s sunny. Perfect running conditions.

The temptation of some winter sun was too much and we all assembled in the city a few days before the race. This allowed some acclimatisation, paella eating, tourism (we saw the ‘Holy Grail’ and an exhibition on Mars where David managed to slightly concuss himself on a holographic Martian), and some gentle warm-up runs through a long, narrow park that surrounds the north-eastern edge of the city centre in what was once a riverbed – pretty cool. 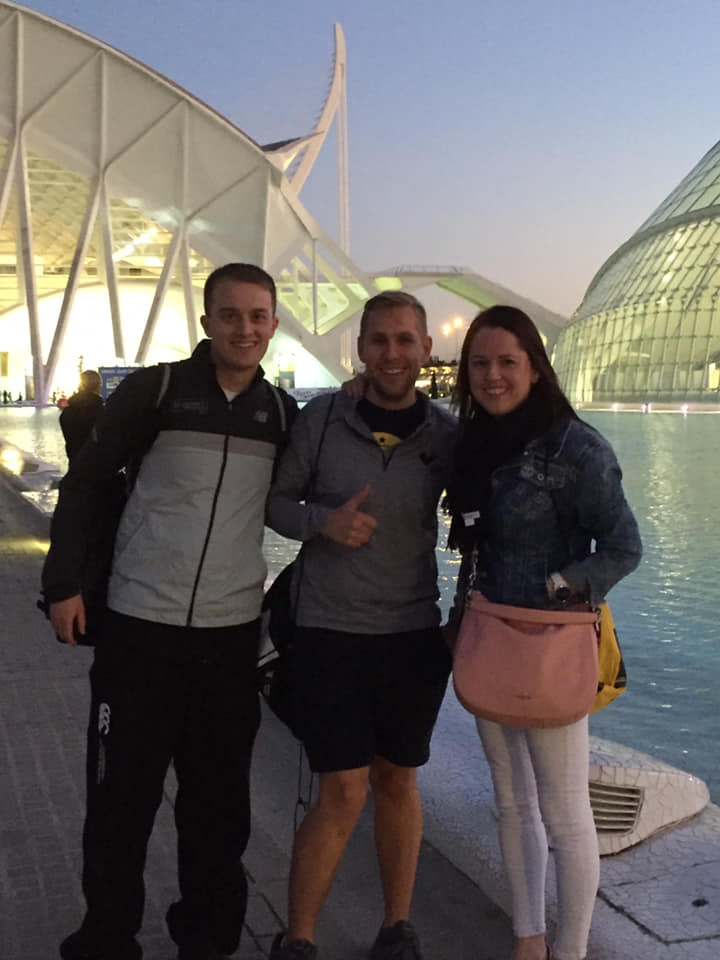 The Expo was well organised although not huge compared to some of the bigger city marathons. What was a pleasant surprise was the reasonably priced merchandise! Sponsored by the Spanish brand Luanvi, we all picked up some nice little long-sleeved training tops for 15 euros – bargain!

On race day morning, we gathered for the customary breakfast of porridge. The race was due to start at 8.30am so, being cautious, we agreed that we would be at the bus stop to take us to the start line before 7am. Given that David usually turns up to things ten minutes after they’ve started this seemed like a sensible plan.

The marathon handbook assured us that extra buses would run to accommodate us all. I think the Spanish definition of ‘extra’ is somewhat different to the expectations of three eager Brits!

The first bus to arrive was absolutely packed and hardly anyone at our stop got on it. We shuffled expectantly along the pavement waiting for the stream of extra buses. Fifteen minutes later we were still waiting and beginning to get nervous.

We then decided to try the metro, which would involve a 20-minute walk at the other end but we wanted to feel like we were doing something. This too was a fruitless task and 20 minutes later we were back in the ever-lengthening bus queue.

After what seemed like ages (it was now 7.50am we managed to all squeeze on to a bus, with David wedged between a seat and a luggage rack. Not ideal pre-race prep but we made it to the start with minutes to spare. 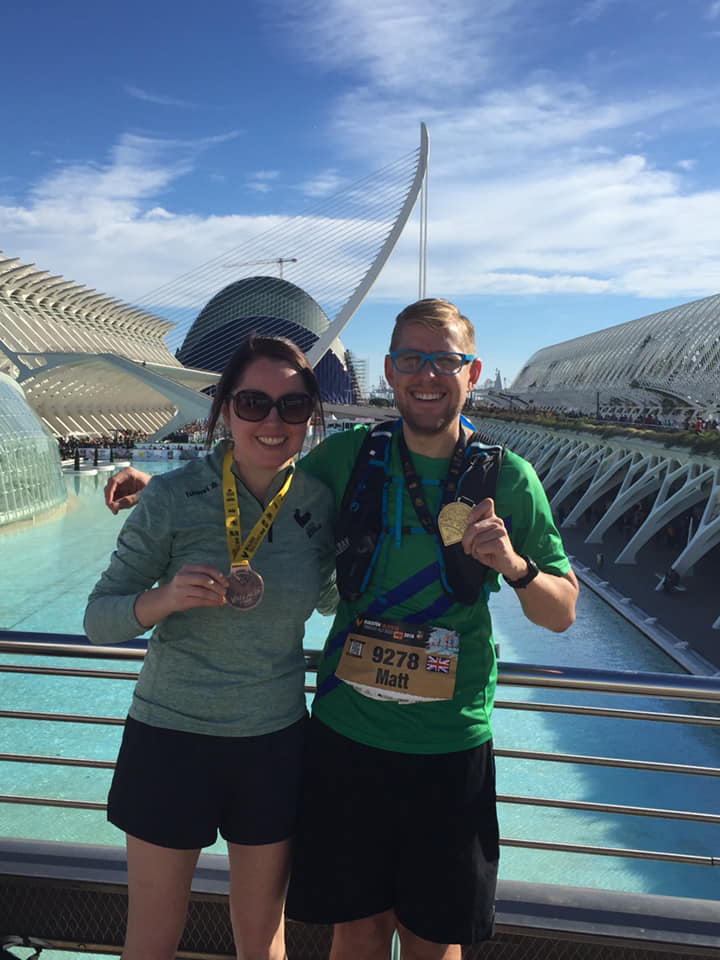 The 10k route was really congested and due to the lateness of my arrival I found myself quite near the back and having to contend with people walking before the 1km marker. I had hoped for a PB but doing the first km 40 seconds slower than I needed to be doing soon put paid to that hope. It was a nice route though that took in the old town and I finished strongly (another negative split) in 48:58.

My next task was to get out on the course to support Matthew and David (after getting my medal engraved, obviously).

I was aiming to see them at around 16/17km and again at 25/26km mark as the loops of the course meant it was a short walk for me.

On my way there I managed to spot the elite field sprint past. The men’s race would eventually be won by Leul Aleme in a super speedy 2:04:31 and the women’s race by Ashete Dido in an impressive 2:21:14. I managed to obtain a high-five off David and a wave from Matthew as they went past. Spotting duties then fell to David’s partner Becci at 30 and 39km.

While we were out on the course, there were many back at home on the tracking app and WhatsApp eagerly watching and wondering whether David’s surge of pace half-way through was sensible. He later agreed it wasn’t

David and Matthew both had different goals and reasons for running Valencia. David wanted to banish the demons of a very hot London 2018 where he felt he hadn’t run to the best of his abilities, while Matthew wanted to enjoy a more controlled marathon than Amsterdam. It’s safe to say they both smashed it.

David casually knocked a whopping 55 minutes off his London time, reducing his PB from 4:19:09 to 3:23:55, although he very much looked like he wanted it to be over 400m from the finish line.

I am now slightly peeved that I can’t rib him any more about me having a sub-4hr time and him not, but seeing all his hard work and training over the summer and autumn pay off just about makes it all right… just.

Matthew, on the other hand, finished the marathon with a big smile on his face only six minutes outside his Amsterdam time in 4:04:54. He also claimed to feel only ‘slightly achy’ in the hours after the race, much to a nearly crippled David’s disgruntlement.

Matthew really enjoyed the course with a lot of it run on wide, uncongested boulevards. It was very much a ‘city’ marathon with great scenery and, apart from near the beginning, the public support was loud and sometimes deafening. The finish line, built over water, was a stunning way to end. Definitely a race he would recommend.

At the end of the race, when he was a bit unsteady on his feet, David was quickly attended to by the medical helpers (nothing serious, just a bit tired and nothing a little sit down couldn’t cure). It was everything you would expect from an IAAF Gold event and the medal was top notch. The added bonus was being able to recover on the beach in December.

The day was rounded off with champagne, tiny sandwiches, and more champagne. All in all, a pretty successful trip and we will reconvene, with a few other Roadrunners, to do it all again in Berlin next September. Can’t wait!