LADIES’ captain Sam Whalley reports from the Berkshire Cross Country Championships, another proud day of success for the club…

TWENTY-FIVE Reading Roadrunners were entered into the Berkshire Championships and although this is a team selection race for the inter-counties XC championship, held in Loughborough in March, it is also a good opportunity to try to pick up some team prizes.

St Andrew’s School in Pangbourne was the venue. This is not one which is familiar to me, so I was unable to advise on whether it would be grassy, hilly or otherwise. However, the organisers suggested that trail shoes might have been preferable to spikes, given certain stretches of the course.

It was, it turned out, a course of two halves: flat playing fields which led to woodland, with twists, turns, tree roots and plenty of undulations.

First up, for a change, were the senior and vet men. The under 20 men were also in this race, but were able to duck out after 9k (3.5 laps), while the more grown-up men continued for a total of 4.5 laps, and a total distance of 12k.

For the past six years, this race had been won by the same person — Alex Tovey from Birchfield Harriers — and this year was to be no different.

He did, however, have Rob Corney on his heels this year, and they seemed to switch places throughout the race, with Rob eventually a fantastic second, a place up on his position last year. 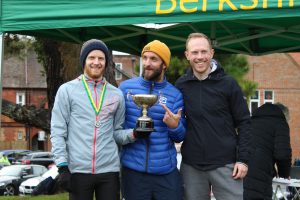 I was sure to give the Reading AC man who shook hands with Rob at the prize-giving a hard stare; I do hope Rob decides to stay with us (we do have brownies, after all), and that the incoming chairperson will seek to offer our high-performing athletes the expert coaching and support they make be seeking elsewhere.

I’ll step down from my soapbox to say that the next Roadrunner to finish was Mark Apsey, who, having been selected for Berkshire as a reserve last year, was determined to earn an automatic qualifying position this time, and he did just that, with a really strong run, and fifth place. Jack Gregory was next in, followed by Mark Worringham, who managed to equal his second vet placing from last year, this time beaten by Newbury’s James Craggs, who also took individual gold at the BBO XC champs in November.

These championships are ones where a male is considered to be a veteran at the age of 35, rather than 40, and consequently most of our male vets find themselves in competition with different people.

Completing the seniors’ scoring team of six were Chris Lucas, David McCoy and Ashley Middlewick. Ashley had had us all worried when he volunteered to marshal at Woodley junior parkrun before the race. A great thing to do, by the way, but on race day?

We needn’t have worried, as he managed to arrive in good time, even if he was still standing around in tracksuit bottoms and coat four minutes before the start. Talk about making me tense.

Ashley, and the others, all ran excellently, and the seniors team was awarded the overall trophy, for the first time since the 2009/10 season, with 58 points to Newbury’s 83. 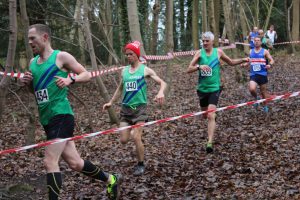 Chris Burt was next to finish, having had a brilliant run. We would have also expected Lance Nortcliff to be in the mix by this point, but on lap two he had twisted his ankle in the woods, and was unable to finish the race.

It was Ben Whalley, then, who finished as second vet scorer for the team, much to his own surprise. In fact, having flown home from a two-week work trip to the USA four days before the race, and nursing an iffy knee, Ben was far from confident in his ability.

This was worsened by a frantic search for his wallet on the morning of the race, and stepping in something revolting. A warm-up jog with chef Apsey was ordered, and a chat about the best way to cook a Christmas goose seemed to get his head in the right place.

Andy Blenkinsop was next Roadrunner vet to finish, followed by Brian Kirsopp, this year having entered in the correct age category (although thankfully they have changed the system and it is not possible to mistakenly select the incorrect one). The vets team was therefore second, after Newbury AC.

Pete Jewell, Grant Hopkins and Andrew Smith were not far behind, the latter struggling with a knee issue. Grant and fellow championship newcomer Chris Burt had been a little alarmed by the speed and competitiveness at the front end of the field, but nevertheless both managed to record 10k PBs during the race.

Tim Grant, David Caswell, Bryan Curtayne and Nick Adley were the remaining vets in the team, and the vets B team was fourth. What a great club this is, to be able to field two complete vet teams!

The women’s race followed, with an incredibly small field of only 12 seniors, 10 vets, and six under 20s, with the youngsters completing two full laps to the others’ three.

We had only entered one senior woman for this race, Chantal Percival, but unfortunately she injured her ankle the day before, and was unable to compete. Fingers crossed that her third place finish at the recent BBO championship will be enough to earn her a Berkshire vest.

Our vet women, then, were our only medal hopes… no pressure! As Pete Jewell gave them the lowdown on the best places to run throughout the course, both for efficiency and injury avoidance (this is a real benefit of running separate male and female races) I did tell them that we needed four to score… again, no pressure!

The race was won by Bracknell’s Amelia Quirk, who you might have seen on TV last week, representing Great Britain in the Euro cross country championships. You could say the standard was high, and we were missing some of our usual top performers, due to injury. 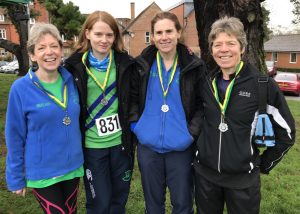 First Roadrunner home, as expected, was Helen Pool, as fifth vet, with Nicole Rickett having a great run in seventh. Lesley Whiley ran her usual, strong, ‘start slowly and pick them off’ race, and was ninth, while Susan Knight tried to keep her in her sights, and was tenth.

By my calculations (actual maths), the vet women’s team was second to Newbury’s first. When it came to the actual prize-giving, though, it was announced that there was only one complete team.

An inquiry found that Lesley was missing from the results, and a further investigation revealed that men’s captain Phil Reay had given her Chantal’s race number, and no one had noticed that it began with a 4 rather than an 8. Honestly, give a man a job!

Fortunately (for Phil), the Berkshire Athletics people were in a very good mood, and it was all sorted, with the women receiving their silver medals, the same as last year. Great result! 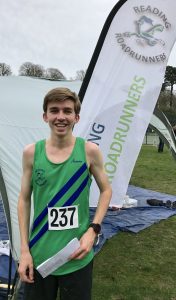 Normally this would be where my report ends, but on this occasion we also had an under 17 male running later in the day.

James Rennie wasn’t sure how he would do in the 5k race, knowing what a competitive field it was. However, he started off in around tenth place, and ran an extremely well-paced race, finishing an incredible fourth. This earned James an automatic place in the inter-counties — well done!

We will have to wait to find out which of our other athletes will be selected for Berkshire. Full results from the championships are here: http://www.berkshireathletics.org.uk/sites/default/files/2018/events/county%20cross%20country%20results%2016.12.2018%20pangbourne%20for%20county.pdf