Define ‘finger-in-every-pie’! SAM WHALLEY is not only the Roadrunners’ chair but also the secretary of the Berkshire Athletics’ XC section and a top runner herself as well as an ace reporter for this website. Here’s her offering from the weekend action…

Reading Roadrunners braved the freezing conditions at the Berkshire Cross-Country Championships yesterday, with medal-winning performances from our vets.

On a lapped ‘lumpy’ 10k course around fruit fields at Cookham, Under 20 Jacob Atwal came fifth in his 8k race, with Ryan O’Brien 13th in the senior race, which was won by GB steeplechaser Zak Seddon. 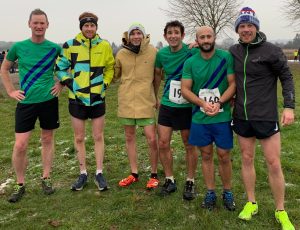 Both Jacob and Ryan received invitations to run for Berkshire at the Inter-Counties XC Championships at Loughborough in March, Ryan currently a reserve. Completing the fifth-placed senior team were Nathan Davies (27th) and Dimi Gospodinov (35th).

But it was bronze medal glory for Chris Burt, Fergal Donnelly (first V50) and Tony Page, who finished as third V35 team, a result only corrected after the event. That meant they were denied their moment on the metaphorical podium.

Helen Pool was our only female entrant, finishing an excellent 12th in the 8k race, and picking up an individual medal for third V35 with her reserve place for Berkshire.

It was the second consecutive week that our vets were in medal-winning action, after the SEAA Masters XC Championships in Horspath last Saturday. 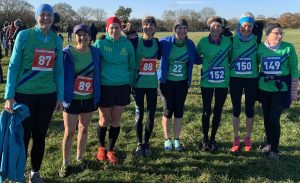 The women’s V50 team (Ann Rostern, Sam Whalley and Becky Mellor) managed fifth — even with Ann mistaking the women lined up for youngsters, missing the gun completely, and starting the race behind everyone else!