Roadrunners’ men pipped both Datchet and Finch Coasters by just one single point to snatch first place at the final TVXC League race of the season.

While this wasn’t enough for us to retain the men’s title, nevertheless it was a pleasing result with several new members stepping up.

That’s a good sign for the future and will leave champions Datchet looking over their shoulders next season. 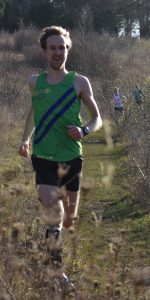 The League had saved this season’s hardest event to last, with hills aplenty through Bradenham Woods and stunning views over the Chilterns in the morning sunshine.

But before we hit the hills, there was a fast downhill start. No surprise to see Sibrand Rinzema (left) leading the way, looking to cement his No.1 position in our TVXC club champs. He was closely followed by Ben Paviour — our leading M40 — who had to hot-foot it to the start having been delayed en route.

Sibrand and Ben (right) battled it out at the front, eventually finishing in seventh and eighth places, with Tony Page in 15th. 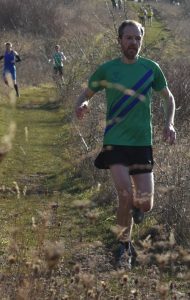 Our victory was secured further down the field with ever-present Jacob Atwal (20th), Matthew Sarjent (28th) and Lance Nortcliff, returning to the scene of past glories, in 33rd, each just edging out our rivals to make it count.

Special mention goes to Matthew for an excellent result on debut, clearly a chip off the old block. No wonder Bruce struggles to keep up!

There were many other excellent performances, with members fighting it out in the final round of our TVXC club championships. Watch this space for the final individual results, which will be published soon.

The season finished with our men in second place in the league table, the ladies joint fifth and the club fourth overall.

In the meantime Sunday’s provisional results can be found at http://www.tvxc.org.uk/results/team?race_id=102

Our focus now switches to the final Hampshire League fixture of the season at Popham airfield on February 19th.

It would be great to have a strong team out for that one to maintain our position in the top division.