Following the second club championship event of the year, ladies captain SAM WHALLEY again does the honours with this report from the front line after competing herself…

THERE was a Reading Roadrunners 1-2-3 at the Goring 10k. Well, first man and second and third women, at least.

With Fleet Half Marathon cancelled and marathon training plans out of the window, there were a few on-the-day entries for the undulating local race, and competition in the club championship* hotted up.

*Quick reminder that you have to be in it (your RR kit) to win it. There are no fewer than 41 RRs on the results, and no way were they all in green (shaking head, sad face).

First home in the senior men’s category, and first man overall, was Marcus Fletcher. You may be surprised that he was not first across the line; this accolade went to in-form Jessica Gibbon, of Reading AC, who has completely smashed the XC season.

For the MV40s, there was a close battle between Fergal Donnelly and Tony Page, with Fergal just winning.

The MV50s was the most populated category of the race, and only David Caswell was required to complete the set. With Brian Kirsopp pulling up with hamstring pain at 3k, it was Tony Streams who took the 50 points. 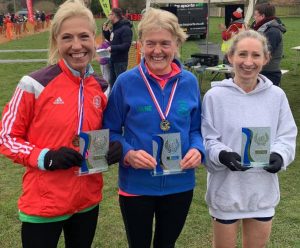 Alan Freer led home the MV60s, and also picked up the Masters trophy, as they called it.

Eddie Thorpe missed out on the Grandmasters prize by two minutes, but was the only contender in the club’s MV75 category, while Stephen Wing was happy to pick up 50 points in the MV65s.

There were no senior women, but Sarah Dooley picked up 50 points the FV40s, along with the vets prize overall (third female).

Katherine Sargeant was second female overall, first FV50 for the club, and declared the Supervet! Whose idea were these names?!

Jane Davies, unsurprisingly, was first FV60, and the Masters winner, with Heather Bowley claiming 50 points for the FV65s.

And here’s my report from the Saturn Running-organised Lost Runs event at Thames Valley Park, where there was also a good turn-out of Roadrunners.

This seven-hour window of opportunity was designed to be ideal training for those entered in spring marathons, half marathons and ultras. 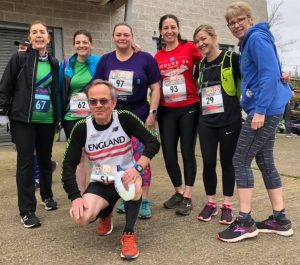 I thought it would be a perfect warm-up for Paris (er, perhaps not) and then Brighton (oops!) Oh dear, this is getting expensive.

With little incentive for the longer stuff I ran a half-decent half marathon (with negative split) and fled early, leaving the proper long-distance runners — like Martin Bush and Jo Sollesse — to continue racking up the miles.

We had been dreaming of racing over the Verrezano Bridge in NYC while having to make do with the Horseshoe bridge over the Kennet, which became increasingly difficult to cross as East Reading’s finest returned from Tesco laden down with the fruits of their stockpiling raids.

As a tribute to my unlucky club colleague Liz Jones, I wore my (totally redundant) England vest for this event. 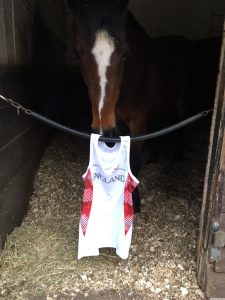 Liz was supposed to be lining up for England in the age group masters international at Fleet but with this race also falling foul of the pandemic, she missed the chance to represent her country.

This disappointment followed a week in which she had battled to recover from a fractured thumb and cracked ribs after a cycling accident.

Liz was determined to make the most of her big day however, and wore the coveted strip on an off-road run, proudly displayed it to her horse, Kazan (left) and then a field of goats, as well as the statues in Trafalgar Square, buskers in Covent Garden… and finally she slept in it (below). Coming soon will be  a montage of images of Liz’s vest’s day in the sun… set to music! 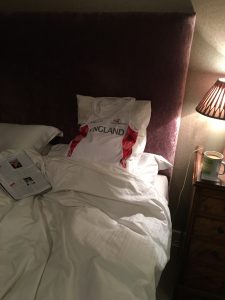 Elsewhere, Ryan Faulkner was the only Roadrunner competing at the somewhat controversially-staged Bath Half Marathon, where he ran 1:18.22, while Emily Brett was also a solo half-marathoner. She ran Hampton Court in 2:13.00.

For the second consecutive event, Ashley Middlewick was on a podium. He picked up another runners-up prize with a time of 37.45 in the Mad March Hare 10k at Woldingham.

The Milton Keynes 10k was a family affair for Roadrunners. Andy Atkinson was second MV65 and his wife Liz third in the same age category. Mark Andrew was up in 23rd in that event with a time of 41.20 and his wife Veronica finished with Liz Atkinson.