FOR the third year in a row, Reading Roadrunners have won the men’s veterans title in the fiercely competitive Hampshire League. Men’s captain JAMIE SMITH here pays tribute to Mark Worringham and his brilliant squad…

Under clear blue skies and in glorious sunshine, the last league cross-country fixture of the season took place at Popham Airfield. Yes, that was actually the weather yesterday! 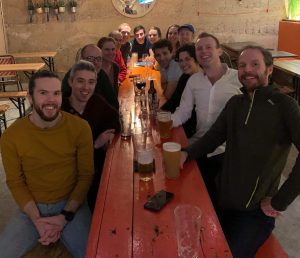 There was no sign of the mud that we have had to get used to over the course of the season and this was certainly very much appreciated after the recent mudfest at Parliament Hill for the Southern XC Championships.

We finish the cross-country season as veteran Hampshire League winners. The confirmation came with another first place finish for the team on the day.

This meant that we are the champions with a perfect score of just four points (for four wins!)… an amazing achievement in a very competitive league. The mightily strong Aldershot, Farnham and District squad trailed in second.

With such a strong veterans’ team performance it’s no surprise that we also had runners finish in the top ten overall for the season.

On the day itself 13 green vests lined up to race and were led home by another of the club’s veteran runners, Ben Paviour, in a fine 19th place overall. He was also second vet home. Hopefully we can persuade Ben to run a few more Hampshire League races next season.

Second home for the club was Mark Apsey in a season’s best performance in 25th place.

Mark Worringham finished a mere ten seconds back in 27th place (fourth vet), with Lance Nortcliff in 53rd (sixth vet) and David McCoy in 59th making up our scoring team.

The men’s team finished in our joint best position over the season, with a fine fifth place on the day.

Indeed, fifth place was also the same position where we finished in the 2019/20 league table. An excellent effort, showing the real strength in depth that now exists within the club.

It’s been a fantastic cross-country season with two out of three league titles won.

Well done to everyone who has turned out throughout the season. We’ll be back for some more mud when the new season starts in October.

Sun, wind and a distinct lack of mud faced the ten female Reading Roadrunners in Popham, for the fifth and final Hampshire League fixture of the season.

With the SEAA XC champion on the start line, it was no surprise that Reading AC’s Jess Gibbon was again the race winner.

Freya Martin was once again first home for our club, matching her best position of 13th, and giving her 11th overall for the season.

Hannah Green followed in 26th, with Helen Pool hot on her heels in 28th (second vet and fifth vet overall for the season). The women’s team was sixth on the day and sixth overall on aggregate, which is an impressive result.

Sarah Dooley was next, in 40th (seventh vet and seventh vet overall for the season), with Chloe Lloyd in 54th. Completing the vet’s team was Emma Paton, in 63rd (20th vet), giving the vet women’s team their best finishing position of second and third on aggregate.

This was a fantastic result, and a brilliant end to the season. If it were up to me, I would be rewarding team podium finishes, and top-ten finishes in the overall and vets’ competitions. But it’s not.

I am really grateful to the all the women who have turned out for the club this season, and proud of what we have achieved as a team. Well done!