TWENTY-FOUR brave Roadrunners gave their all on London’s iconic Parliament Hill Fields course today. As ever, our captains are proud to quickly spread the news. Here’s JAMIE SMITH’S report on our men’s performances…

ROADRUNNER David Clay summed it up perfectly when he said: “Well, that was brutal!”

He was one of 15 men in green vests who took to the start line for this year’s South of England Cross-Country Championships at the bottom of the first of many daunting hills.

Among our team were seven debutants at the famous Parliament Hill course.

On the coach up from Palmer Park, there was a mixture of nervousness and excitement. As we arrived one of the younger age group races was just starting and everyone was eager to see how these youngsters tackled the first big hill.

Race time came round for us in no time at all and, having just seen our women’s team run so strongly, we wanted to do ourselves and the club proud.

Away up the hill, a swarm of runners were all looking to get a good start and find the right line for the first bend, which is known for being a bottleneck. After topping that first hill, the men had three full laps to complete to make up the 15km distance.

We were soon to find that this was not going to an easy day, with deep, heavy mud throughout the entire lap, each corner getting more perilous with each lap as the 1,172 runners trudged through.

Interestingly, the people who look after that part of Hampstead Heath use shire horses to help bring the ground back to good condition.

There has been a big debate around the distance of the men’s race and for me the battle to get round and beat the conditions makes it one my favourite races of each year.

The race was won by Great Britain runner Adam Hickey in a staggering 47 minutes 21 seconds. Perhaps being at the front meant he had easier conditions! 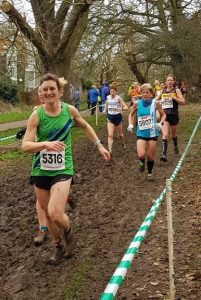 It was fantastic to have so many green vests on the start line and our squad managed a very respectful 24th position out of 81 teams. Well done to every single guy who tackled that course today.

We were led home by Jack Gregory in 116th, despite his having been unsure all week if he would run because of a heavy cold.

Everyone should be incredibly proud of their run today.

And here’s SAM WHALLEY’S report on our ladies’ efforts…

Nine Roadrunners’ women lined up in pens 46 and 47 at the bottom of Parliament Hill, with a few having withdrawn through injury.

There was a mixture of nerves and excitement among those who were there, with some knowing what was in store, and others going on the hearsay of ‘it’s epic’, ‘you’ll love it’, and ‘it’s an amazing downhill finish’. We all knew it was going to be undulating, tough, and given recent weather conditions, very, very muddy. It was definitely a day for the 15mm spikes.

First home were Parliament Hill newbies Mel Shaw, in the form of her life despite developing a huge hole in her spikes mid-race, in 239th, and SEAA over 60s champion Jane Davies, in 248th. 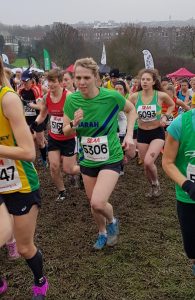 Experienced XC runner, and the club’s FV40 XC championship winner, Sarah Alsford, was next, in 304th, with Chloe Lloyd, another Parliament Hill newbie, completing the scoring team in 313rd. The team was 41st out of 70 complete teams, which is a great result.

Following them in were Sam Whalley (426th), ‘try anything once’ Alex Bennell, only one second behind in 427th, first-timer Swinda Falkena in 455th, Liz Johnson, giving her new spikes the ultimate test, in 495th, and Claire Seymour, in 593rd, with all women finishing the tough 7.6km course in under 50 minutes.

Well done to everyone who ran for us… and to the first lady home, Reading AC’s Jess Gibbon.

Our next visit to Parliament Hill should be for the National XC Championships in February next year. Who’s in?