FOLLOWING an exciting finish to the Southern Counties Vets League fixture at Palmer Park, FIONA ROSS has filed this review of the 2019 season…

‘Reading Roadrunners win the Vets League’ is not a headline you would expect to read. You would wonder if it was factually accurate. But it all depends on your perspective. 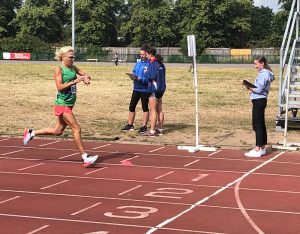 If athletes were scored according to their sterling performances and personal achievements —despite the fact that many are not normally training for such events or have entered for the first time in many years or the first time ever and, if they were scored according to their team spirit. — then Reading Roadrunners would be in a league of their own!

It is impossible to list all the performances during the season, but I will summarise here some of the highlights shared by the athletes who took part.

The first fixture took place at Horspath Stadium in Oxford on April 29th.  Chris Manton, who organised our team for the entire league, told me that his highlight was to achieve a PB in the men’s 35A 800metres. 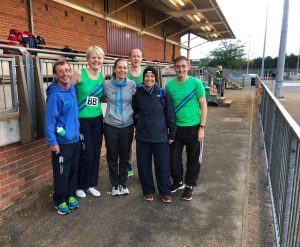 Adele Graham came third in the womens’ 50 100m and told me that her personal highlight was achieving a personal best in the W50 hammer(up from 17.17m to 18.33m).  She also achieved a very respectable third place, as did Dave Fiddes in the M50, in the long jump.

The second fixture took place at Tilsley Park, Abingdon, on May 20th. Ian Giggs stormed round the track to take third place in the M35B 800m while Helen Pool also took third place following a very strong performance in the W35A 3000m. In the field events, a new club triple jump record was set by new member St John Ford with 9.01m. 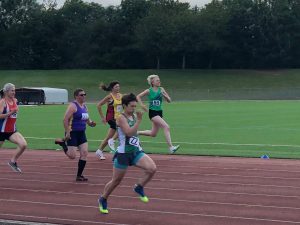 The penultimate League meeting was also held at Abingdon, on June 30th, and saw Nigel Hoult and Pete Jewell take third places in the M60 400m and M50 5000m races respectively. I was delighted to achieve a PB in both the 100m and 400m events.

The grand finale July 14th was jointly hosted by Roadrunners and Reading Athletic Club at our home ground, Palmer Park Stadium.  Sam Whalley, our ladies captain, summed up this fixture very well when she said: “I was pleased to see such a good turn-out of participants, supporters and helpers.  There were some really impressive performances and it was a great way to end the season.”

Indeed, Katherine Sargeant flew around the track to win the women’s 5000m event and both she and Helen Pool came first in their age categories and achieved a PB for this event. Katherine said: “I was delighted to have the opportunity to represent the club over 5,000m. It’s a challenging distance for me, I’m better over longer distances.

“But with the work which our training group has been devoting to this distance and challenge, I seized the chance to test myself, as many others have done recently with race wins at 10k and parkrun PBs.

“Supporting my club-mates was brilliant fun too, and there were many truly inspiring performances.”

Helen added: “My highlight was getting an Athletics Weekly standard and it was great that Katherine and I both scored maximum points.”

Her team-mate Claire Seymour finished a creditable third as our B string at the same distance, while Mark Worringham was just edged out by the experienced Oxford runner James Bolton after a thrilling battle in the 3,000m, with Lance Nortcliff third as our B string.  Another Roadrunner to pick up a very good third place was Tracy Jenkins in the W50 800m. 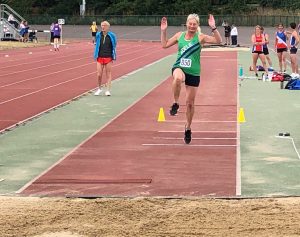 Off the track, Gill Manton won the W35 discus with a throw 16.10m to follow up her PB in the hammer at Abingdon.  In the W50 discus, Adele Graham achieved another PB (up from 11.72m to 13.07m).  She told me that it was “really nice to be competing on home territory with great support.”

Mark Andrew proved his credentials as a great clubman by stopping off on his way home from running the Hell-Fire Half Marathon at Wycombe to compete in the M50 triple jump for the first time, finishing in third place.

Alan Freer took part in the javelin event for the first time in 47 years, initially as a non-scorer, but was then invited to join the Vet 35 competitors.  He told me: “Not only was I up against youngsters and mainly seasoned athletic club javelin throwers, I also had the joy of a heavier and longer javelin to throw!”

Nevertheless, he was pleased to have had one throw which was deemed good and to have managed not to be in last place.  Overall he said it was “an enjoyable experience that I will have another better go at next year, with a bit more practice.” 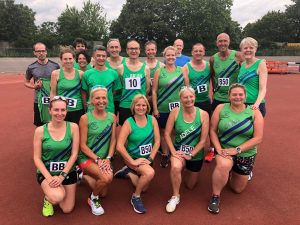 Personally, I was delighted to achieve a PB in the 200m event (down from 37.6 to 35.3 seconds) and Adele Graham, Tracy Jenkins, Hannah McPhee and I were proud to take part in the 4 x 200m relay. We managed not to come last, but above all, this event highlights the amazing team spirit of the green vests!

If you take into account this team spirit, which cannot be beaten, and the personal/team achievements highlighted above, the Vets League 2019 season certainly was exciting and the Reading Roadrunners are definitely in a league of their own.

Thank you very much again to Chris Manton for co-ordinating our team as well as to all the volunteers/supporters and coaches.  Kerri French supported the triple jump event at the last fixture and said: “I loved helping out at the event.  I wasn’t up to speed to compete, but assisting the officials meant that I could participate in a different way.”

Congratulations again to all the athletes!

We would like to encourage other Reading Roadrunners to take part next year, because it is a great opportunity to try something new, support your fellow Roadrunners and get to know other club members — and an opportunity to have some fun.

Adele Graham said: “It is a welcoming introduction for anyone trying track and field for the first time.” Come and join us next season!