BRENDAN MORRIS has joined the ranks of the local running legends who have completed a solo 100 miles during Endure 24. Now, in his own words, he tells the enthralling story of his odyssey through the pain barrier and how he finally crossed the line with the help of a great Roadrunner pal…

I’M quickly establishing a theme in my articles; feeling terrible, lying in bed and not being able to make it to the toilet. My wife has had to help me out of bed twice in the night so I can make the groaning shuffle down the corridor and back. 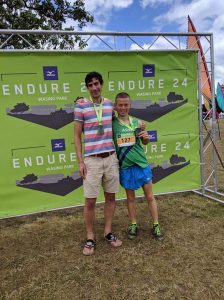 Her suggestion after the second time was that I sleep in the spare room and wear adult nappies. Not a solution to our relationship I was expecting to hear just four years into marriage.

I think I’m feeling so terrible due to severe dehydration, but unfortunately I haven’t touched a drop of alcohol (apart from sipping some of Phil Reay’s beer as I ran past him about 50 miles in).

I’ve done something far more reckless and ran (walked lots) 100 miles in under 22 hours at an event called Endure 24. The event has participants do as many laps of a five-mile multi-terrain course as they can in 24 hours. There are options to enter solo, as a pair, or as different-sized teams.

Two years ago I entered this event as part of a team of five which included Ashley Middlewick. We both enjoyed the event and decided to enter as solo runners the following year, with the aim of supporting each other in training and on the day. I had to defer last year’s place though because it clashed with a friend’s wedding. I would have deferred again if they let me, as this year I’ve been struggling with a foot injury. 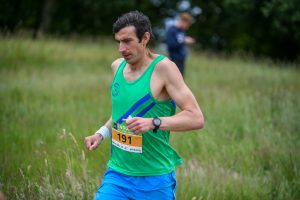 Due to the injury I had not been able to do any specific training for this event. I had put in a 20-mile run three weeks previously and towards the end my left foot had started to hurt, so I was expecting something similar at Endure 24 and made the decision to not risk further damage and pull out as soon as I felt pain in my foot.

My main aim is the Chicago Marathon in October and my recent training had revolved around Wednesday’s track sessions to improve VO2 max and 5k and 10k times. I was going to use this as an opportunity to put in a hard long run of about 20-25 miles, and then see how the foot was and decide whether I wanted to continue. 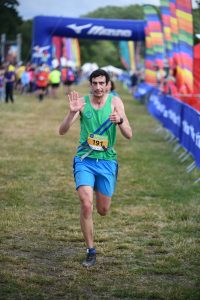 So on went the racing flats and off I went. The course is objectively superb (subjectively less so now), with a great mixture of scenery and terrain, lots of undulations and a couple of steep ups and downs as well. Though picturesque, it was definitely more technical than I remember; sharp twists and turns in places, the odd ditch to jump and tree roots to avoid.

I went pretty hard in the first five laps (25 miles) and completed them in 2hr 53min. This obviously put me in the lead. No one in their right mind (bar David McCoy) would start a 24-hour endurance race at this speed. I walked the next lap with a rucksack on full of food, trying to eat as much as I could stomach. 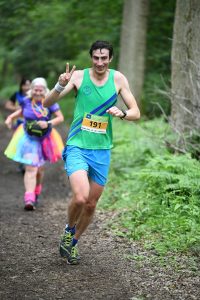 During the 70-minute walking lap I was assessing the state of my foot and it strangely seemed fine. I decided to try and run another four laps after the walk, then would take another walking break.

But after just two laps into this next running stint though (around 41 miles) I really hit a brick wall. I suddenly felt dizzy and sick. I found the nearest tree to lean against and get my breath back, which is a lot harder to do when you’re reassuring every passing runner that you’re fine.

I was not fine. I suddenly realised my hamstrings were killing me and lifting my legs just to even walk was painful. The enormity of what I had done so far also dawned on me, as well as the challenge that lay ahead if I was to make it to 100 miles.

I walked the remainder of that lap with a couple of ladies who were also going solo. Their encouragement and distraction snapped me out of the pit of despair I was falling down and my legs loosened up a bit.

I decided to try and run the next lap as I felt a bit better. This lasted about 300 metres, or 50 metres into the first ascent (known as The Hill Of No Return). Again my body was rebelling and just wouldn’t move as much as I wanted it to.

I walked the rest of that hill and even found that difficult. I knew my days of running up the hills were over. I was seriously contemplating walking to the end of the lap (50 miles) and dropping out. I had gone further than I had expected and the pain was starting to outweigh the enjoyment.

Towards the end of that walking lap, I was caught by another guy going solo. We were walking up a hill together. He had done 35 miles, so was a couple of laps behind me. He said he had got to the stage where you walk the uphill sections and only run down the downhill ones. 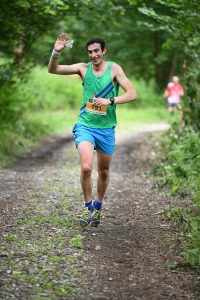 This kind of run-walk strategy was not one I had considered adopting before. With the legs feeling a bit looser, I decided to try it for the next lap at least and see how I got on. It worked quite well.

That lap took me 65 minutes and most importantly felt sustainable. I did a couple more like this, then walked a lap again to take on a good amount of food.

The run-walk strategy then got harder. I managed another two laps of it, but my quads were smashed to bits by this point and it felt more like I was stumbling down the hills with no control, rather than running. At 80 miles I had come to terms with the fact that I could no longer run.

I had made the decision at around the 65-mile mark that I was going to go for the full 100 miles. I still had over 12 hours to complete seven laps, and I worked out I would need to travel at around three miles per hour to complete the distance in time, so could probably walk it home if necessary.

At 80 miles though, even walking became a great effort. The blisters I had created were suddenly very apparent and painful. The monotony of the course and the lack of sleep were starting to take their toll. I became irritable and once again was thinking about quitting after 85 miles.

I managed to continue though, and had the incredible good fortune of bumping into Ashley in the start/finish area at the 90-mile mark. His race hadn’t gone so well and at this point he had only managed 45 miles. He said that he would walk with me to 100 miles to make sure I got there. 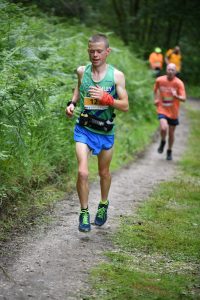 Ashley’s companionship was key to me finishing the 100 miles. He started as a great motivator and distraction and evolved into more of a shepherd and guardian of a toddler-like man stumbling along whinging about how far there was left to go.

I was in a bad way by 95 miles. I was seeing double and feeling quite faint. I had to close my eyes at times while walking to fight the dizziness. I’m not sure I could have gone the full distance without Ashley’s stewardship.

Finishing the 100 miles in 21 hours and 53 minutes meant there was probably time to walk another lap. I was thinking about the money I would need to be paid to even attempt to do it. I settled on a year’s wages. Due to the nature of the event, finishing is rather an anti-climax. Only Ashley and I knew that I had finished. I didn’t really have the energy to celebrate and couldn’t stop thinking: “How the hell am I going to take my tent down?” 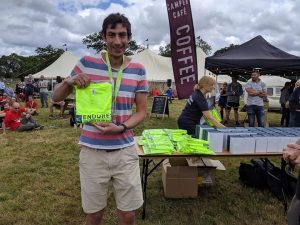 Ashley put me in a chair. It was the first time I had been off my feet for 23 hours. It felt incredible.

For completing 100 miles there is a prize of… a tee-shirt! I’ve been there and got the tee-shirt, so there’s no need to return. Never. Ever.

In fact, is it too early to put one’s name down to do the Ridgeway Relay in 2020 instead?