AFTER a day out in the big city on marshalling duties, ladies captain SAM WHALLEY reports on a highly successful British championship event for the Roadrunners…

THE second May Bank Holiday Monday is always the date for what is now called the Vitality London 10,000. 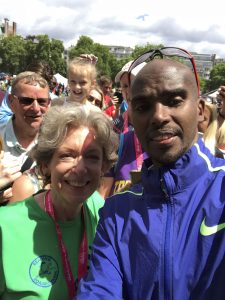 Still, it is an incredibly popular race, with almost 20,000 finishers today. For many, it is the closest they will get to ‘running London’, as the course starts on The Mall and takes in sights as far as St Paul’s and the City.

There are a couple of stretches where the course is two-way and, if you’re lucky, you get to see the elites on their way to the finish.

Our club is allowed to apply for six free male and female places for this race if we participate in the Autumn road relays, and Carl Woffington organises this for us.

These places are ‘captain’s pick’; we want to choose some fast runners as this is a British 10k championship race, with team positions at stake, but it is also nice to reward some of our less elite runners. 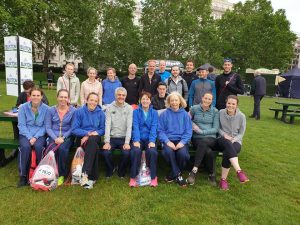 Personally I like to recognise those who have put themselves forward for team events throughout the winter.

From our marshal spot on the Strand we were able to see the runners at just before 2k and just after 7k. The race was won by Mo Farah (above, with Susan Knight) and Steph Twell.

There were 37 Reading Roadrunners listed in the results, and it was hard work trying to spot them all. As usual our eyes were tuned to spot green vests, so apologies if you did not get a cheer — you were invisible. 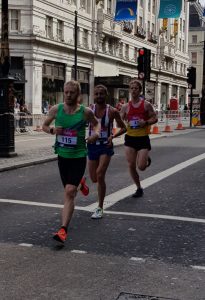 I will never understand the non-wearing of the green vest. Indeed, in an event such as this, it is a bit risky; not wearing a club vest is a violation of the championship rules and your time would not count towards the team total. You don’t want to be that person.

It will come as no surprise to read that first club member to finish was Rob Corney, in 29th place. Only a week or so after another great marathon, Rob (right) proved once again he was worthy on an England vest (which he will wear in the Toronto Waterfront marathon in October).

Rob’s PB of 30:29 is another new club record, taking 56 seconds off his previous best.

Rob was backed up by Jack Gregory, in 32:41, still managing to run great times despite the inevitable restrictions and tiredness that come with having a new baby in the house, and James Rennie, in 34:00. 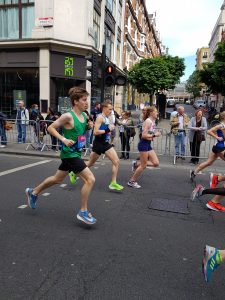 Not yet 18, James is showing so much talent, including some for even pacing, with his first 5k being 16:59.

Today James (left), who switched his allegiance to Reading AC since entering the race, latched on to the international Gemma Steel to help him achieve his very evenly-paced PB. (He must have left her for dust in the end; I notice her finish time was 34:31).

Brian Kirsopp was running his second 10k of the Bank Holiday weekend, having raced at Birmingham the previous day. He finished today’s race only five seconds slower. Lance Nortcliff felt unwell during his warm-up and made the sensible decision to not start the race.

Gemma Buley didn’t run with husband Chris but did finish at exactly the same chip time as him, leading the women’s first team home in 37:59. Gemma was supported by Nikki Gray, with a PB of 39:11, and Laura Peatey, also with a PB, in 41:14.

There were also PBs for Carmen Fuentes-Vilchez, Angela Burley, Susan Knight, and Hilary Rennie, with others possibly to be confirmed. Susan (below) was delighted with her achievement, coming as it did less than a week after her 57th birthday. 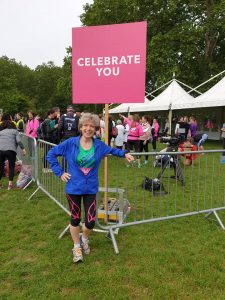 Tina Woffington and Sandy Sheppard had a fantastic day out in the atmosphere, while Jenny Dimmick celebrated her newly-regained mojo with Gill Manton, the latter fresh from a PB in the Westminster Mile yesterday.

I don’t know if I am the only person who caught up on all the TV footage as soon as they got home, but I am taking two things from it.

Firstly, the 800 women who were running in their underwear were part of the Celebrate You initiative, which aims to use plus-size models and normal-sized women to promote body confidence and prove that exercise is for everyone. Aha, that explains a lot.

Secondly, the first three women to finish were noted for the strength they had built during the tough, hard, muddy winter of XC. Just saying..

Well done to everyone who ran today — you did us proud!