A NEW correspondent to the Roadrunners’ website, DAN RICKETT, has filed us this report on yesterday’s ASICS-sponsored Manchester Marathon…

THE Manchester Marathon has a reputation for being fast and flat, which is no doubt why it attracts a field of nearly 20,000. 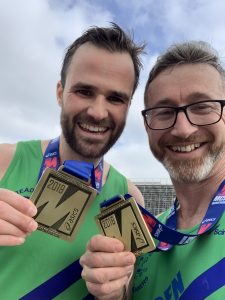 This year 21 Reading Roadrunners and a plethora of supporters made the trek there and back by train, automobile, and (in one case) plane.

It is probably a good thing the course profile is favourable, because the views are not exactly scenic. Perhaps my limited knowledge of Mancunian landmarks meant I bypassed these unknowingly.

Aside from the occasional Oasis track, we could have been anywhere, and were mostly running through residential streets.

However, the benefit of this was a continuous embrace of local support: children with power-up high-fives, street-party cheering, live music and a constant supply of jelly babies. Manchester is certainly a friendly place to run.

I embarrassingly confess my confusion passing through a pleasant looking suburb which I had mistakenly thought to be falling on hard times, since every public building seemed to be for sale, only to later realise we were running through a town called Sale. That’s marathon brain  for you.

Several runners commented on the support from members of other clubs local to Reading, and I have to agree — lovely camaraderie away from home.

For me personally (race report writer’s prerogative), I surprised myself with an enjoyable race. My finishing time of 4:29.17 was far from a PB, but I didn’t set out to achieve this.

My training had gone well, but not excellently, with some nice social long runs, so I aimed for a realistic target (hoping my time started with a four) and the objective to enjoy it.

By mile 23 I still felt in control — this was new territory — so I decided to be a little more ambitious and aim for an arbitrary time.

By mile 25 I was slowing, cursing myself, and wondering why certain arbitrary numbers have more gravitas than others — just who do they think they are? 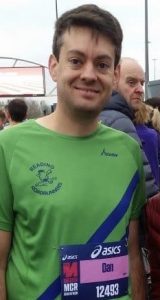 Until, that is, a kind (perhaps psychic, perhaps imaginary) stranger on a bike pulled up and cycled alongside me. “Just over the brow of that hill,” he said. “Then you will see the finish line. It’s a great finishing straight.”

I looked at my watch, re-engaged arbitrary smug number, thanked stranger/fairy godfather, and pushed on to succeed — still managing to enjoy it. And he was right: Manchester does have a nice finishing straight.

Lesson learned for me: that targets should be re-evaluated appropriate to training. Life gets in the way sometimes, and I won’t punish myself for that by hankering after a rigid target, no matter how tempting. Sometimes it’s OK to just want to finish or enjoy the atmosphere.

Which brings me to a nod to those who didn’t have a good day’s race, who were sadly DNF, or who were injured and didn’t make it to the start line. You may be feeling a little faecal now, but this doesn’t make you any less awesome for making the right decision. There’s always next time, and plenty of RRs ready to cheer you home.

Manchester was a fast and friendly course, but I’d recommend staying an extra night when the cheers have faded if you want to see Manchester itself.