A 2pm start made for a lovely lazy Sunday morning, with tea in bed and a rather portentous chapter from The Art of Running Faster, by Julian Goater and Don Melvin. 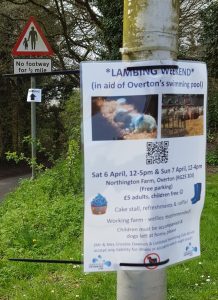 En route to the race there were several signs to a local lambing event, which seemed like a much better plan than 16 miles of hilly trail running.

It was especially inviting given that the weather forecast suggested that all but the very fastest runners would get soaked. As it was, three intrepid Roadrunners – David McCoy, Chris Cutting and myself – made it to the start after a hair-raising coach journey.

Not only did the coach entirely fail to stop at the Bombay Sapphire Gin Distillery, but the route necessitated a hairpin turn to head up towards the highest point in Berkshire (Walbury Hill; which is actually the highest point in the south-east of England – have that, Leith Hill).

The race start was at the Combe Gibbet, a short way west of Walbury Hill. The original frame, long since gone, was erected to gibbet the bodies of lovers George and Dot, who were convicted of murdering the former’s wife and child in 1676. 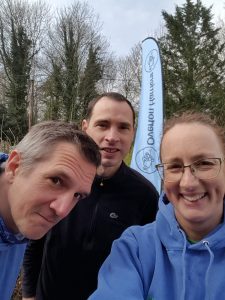 Luckily for us, the only dead body to be seen was at about the 11-mile mark, where a hare was having a particularly bad day.

The terrain was rough, wet in places (puddles up to my knees – bliss!) and, although technically a downhill race, there was enough up to challenge even the most mountain-happy goat.

Other significant landmarks included a fabulous huf haus, the Highclere Castle estate, plenty of lambs and some scallies on motorbikes: the 16 and a bit miles flew by.

With a proper cuppa in a mug at the end and plenty of friendly marshals and runners en route, it was a lovely event.

I think the lambing and/or the gin distillery would have been better, though.

Our picture shows Katie with Chris Cutting and David McCoy. Chris and Katie were both credited with personal bests and David a season’s best. Right: The course profile.