FASTEST postman in the west Brian Kirsopp is celebrating winning his first England vest but admits: “Never in my wildest dreams did I think I would ever do it.” 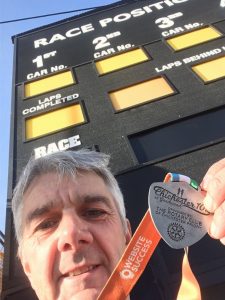 His qualification was the culmination of a highly successful six weeks of racing in which he:

Now he can look forward to representing the England Age Group Masters team at the Great Birmingham 10k on May 26th.

Brian and his Masters team-mates will line up at the front just behind the international elites in a race which usually attracts live television coverage.

But first he can proudly look back on what he thinks was a “massive achievement.”

“It all started back in December when I ran every day for at least three miles,” he said.

“That was in an event called Marcothon, a Facebook group that encourages runners to do three miles or 25 minutes every day for the month.

“Towards the end of the month I entered a marathon organised by Saturn Running and thought I’d completely fail given the extra mileage and tired legs. On the contrary I found that my endurance got me second place in a time that I had targeted with a few minutes to spare.

“That really increased my confidence for the Gutbuster, at which I also gave everything and found that I could still have a good finish.

“My main focus was to win my age category at the Woodcote 10k. I managed to do the first downhill 5k in under 18 minutes and held on up the climb to win in a course PB of 38:24.

“That showed me that if I trained harder I could run faster. It gave me the self-belief that I could achieve my goals if I changed my mental outlook to racing.”

By that stage Brian had received the England Athletics email announcing Age Group Masters representative opportunities, but considered they were “something the faster runners did and way out of my league.”

When he learned that the qualification target for his age group was 39 minutes, he thought: “That’ll be easy.”

But then he looked up last year’s results at Chichester, where the third-placed MV55 ran 35:57, and said: “My heart sank. Even if I ran my track 5k PB of 18.25 twice that would still leave short by quite a margin. 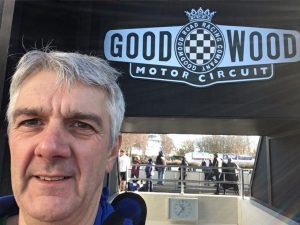 “But I entered anyway knowing I had nothing to lose and that the experience would do me good.

“Sandy Sheppard gave me a lot of encouragement, as did the club captains Phil Reay and Sam Whalley. I knew I was capable of running faster but I also knew I had to beat myself mentally as that’s where I fail in races.

“At the club dinner-dance Phil told me in no uncertain terms to “toughen up” and to “bite the bullet” and just go out and do it.”

Race day didn’t start well. After a late night at the dinner-dance he set his alarm for 6.15am, only to wake at 4.45am. “I suppose that’s quite normal for a postman,” he said, “but unhelpful before a race when sleep is important.” However, his customary double-strength coffee set him up well for the day.

“I left early because the roads were frozen,” he said. “When I started out my car temperature gauge said minus five. By the time I got to Odiham it had gone down to minus 11. Fortunately when I arrived at Goodwood it had gone up to minus one. Cold, but not uncomfortably so.

“Looking at the other runners in my pen (35-45 minutes) I could tell it was going to be fast-paced. They were nearly all Harriers or AC runners.

“There is a danger of setting off too quickly in that company, what with the adrenaline and atmosphere, and I did exactly that.

“My target pace was six-minute miles for the first half and then to see what I had left. But I shot off at the gun and did 5:37 for the first mile. 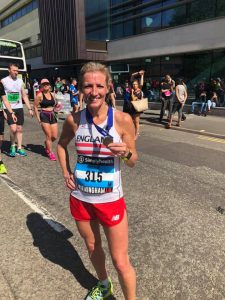 “It was slightly downhill so I forgave myself and tried to slow it down but still did 5:49 for the second mile.

“That actually felt comfortable, so I kept that pace and did the next mile in 5:51. But it was slightly uphill and took a lot out of me. Looking at my watch at the 5k point, I realised I smashed my PB for that distance with 17:58.

“The first 6k of the course is on mildly undulating roads and the last 4k is on the Goodwood motor racing circuit, with the end, fittingly enough, being on the Finishing Straight. On entering the track I’d developed a stitch and was worried that I was going to start being overtaken.

“I finished my fourth mile in 5:58 but held my position. The next mile was painful. I had slowed to 6:02 with a chasing pack closing me down, so it was time to put Phil’s words at the dance into action.

“I knew I’d run the fastest I’d ever run… but was it enough? I saw the results being pinned to a board near the finish and looked to see how many had beaten me. THIRD MV55! Beyond all expectations I’d done it and now I’ll be wearing the coveted England top. Onwards and, hopefully, upwards.”

Quick to congratulate the Roadrunners’ latest international, captain Phil Reay said: “I first met Brian at an awards ceremony four years ago where he was collecting several gongs. He’s been stockpiling age category awards ever since. 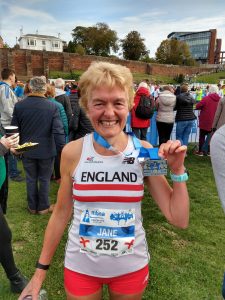 “He’s a regular scorer for the club at team events and I’m delighted all his hard work has resulted in an England vest.”

The first seven men home in the Chichester Priory 10k all broke 30 minutes, with William Mycroft, of the Enfield and Haringey club, taking the win in 29:32.

Brian will become the third Roadrunner to wear an England vest in the last year after Caroline Hoskins (above) represented her country at the 10k distance last May and Jane Davies (left) did so in the Chester Marathon in October.

Several more Roadrunners will be chasing England Age Group Masters honours in the Fleet Half Marathon on March 17th.