CONCLUDING our series of in-depth bulletins on the 2018-19 Hampshire Cross Country League season, SAM WHALLEY reports on a highly successful conclusion to Roadrunners’ campaign for honours…

THE final fixture of the Hampshire League season is often the least well-attended of the five, with winners in each category having already been decided. Still, it is always worth turning up and trying to improve upon individual and team positions.

Such was the attitude of the 24 Reading Roadrunners who made the trek to the Hampshire League race at Dibden Inclosure, in the New Forest. 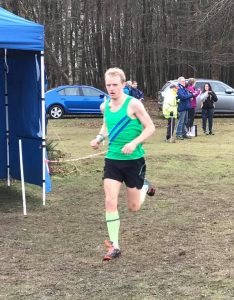 With the vet men already set to win their league, and the seniors sitting in joint fifth, the race was on, literally, for podium finishes all round. You just know things are getting serious when Mum and Dad Apsey come along to spectate.

Club hero Rob Corney (right) looked incredibly comfortable on the first lap, and extended his lead during the second, to make club history by winning the race, beating Aldershot’s Philip Sewell, who is the individual league winner, by over 20 seconds.

Jack Gregory was next to finish, in 11th place, and this propelled him into the top ten, for a ninth-place finish for the season overall.

Third Roadrunner home was Ben Paviour, in tenth (second vet), followed by Mark Apsey, in 17th, which was enough to improve his individual position from tenth to seventh overall.

It’s hard to believe the club could have a team where someone of Mark Worringham’s calibre is fifth home, but such is the impressive depth of the squad at the moment. Mark completed the scoring team in 24th (third vet). 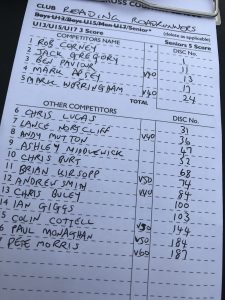 The Wednesday evening training group that these guys are organising for themselves is obviously doing the trick. And despite feeling like he had run badly all season (it’s all relative), this secured Mark’s position at the top of the vet men’s leaderboard, with Ben Paviour not having run enough of the races this year to qualify (you have to run four of five).

The senior men’s team was second, which gave them an end-of-season position of third – mission accomplished!

Next across the line was Chris Lucas, in 31st, followed by Lance Nortcliff, in 36th (sixth vet), having had his run interrupted by the appearance of some New Forest ponies on the course. This vet placing was enough to give Lance a second-place finish overall, and the vet men’s team retained their title. Great work!

The course having been listed as unsuitable for spikes led Andy Mutton to have an interesting run in road shoes. In fact, the course was OK for short spikes.

Ashley Middlewick was next, with a parkrun already in his legs, followed by Chris Burt, making his debut in the league, but looking forward to next season. Brian Kirsopp was unable to catch Chris this time, but can celebrate being third MV50 nonetheless.

Andrew Smith, on his way back from injury, was next, with Chris ‘I hate XC’ Buley, in 100th place, out of 194 runners. Another parkrunner, Ian Giggs, followed, with Colin Cottell, and the last two park-runners, Hampshire League newbie, Paul Monaghan, and Pete Morris, completing the men’s team. You have to wonder what kind of runs people could have without a parkrun beforehand?

Pete Jewell unfortunately pulled up with a hamstring injury on the first lap, and did not finish. 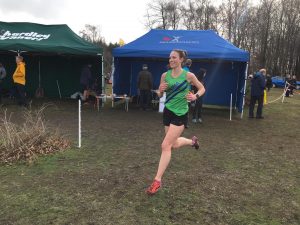 The women’s team has been plagued by injury this year, and you have to feel for Gemma Buley, whose new coaching has taken her from strength to strength, as she doesn’t always have a strong team to back her up.

Still, we did manage to get a team out for every race this season, and a number of women have tried this league for the first time, so this is progress.

Saturday’s fixture saw Gemma (right) finish 12th, her best position yet, and this gave her an overall tenth place on the season’s leaderboard. Well done, Gemma! She then had time to refuel, and put some layers on, before returning out to the course and cheer on every single one of us on her cool-down.

As we were missing some of our stronger runners, with Chantal Percival, Bithja Jones, Helen Pool and Nicole Rickett nursing injuries and niggles back to full health, and a jet-lagged Sarah Dooley having other commitments, our next runners to finish, vets Caroline Jackson and Claire Raynor, came in 69th and 70th.

Caroline has done very little in the way of XC before, preferring to run one marathon after another, but found that she enjoyed this short race, and said: “If all XC was like that, I would do more.” Breaking news, Caroline… all XC is like that, and it may even help with training for the longer distances.

Claire Raynor is a new member, and another one of us who has been bringing Reading AC children to these events for years. In my spare club T-shirt, Claire had a great race, in spite of her worry that she might be last, picking people off from start to finish, showing that her training for the Manchester Marathon is going well.

Despite both these two having run parkrun in the morning, I was still unable to catch them, and they completed the senior women’s scoring team, which finished 12th on the day, and eighth overall for the season.

I was the third vet scorer for the team, in 77th, and the vets team finished in ninth, and sixth overall.

Chloe Lloyd was back for more after her debut at Prospect Park, and this time she meant business, and had ditched the leggings for shorts. Chloe came in in 91st, closely followed by Claire Seymour, in 94th, out of 146 runners. Claire is the only one of our women to have run every fixture this year.

Cecilia Csemiczky didn’t make the journey this time, recovering from a chest infection, but we must thank Cecilia for her participation and support throughout the season.

I am also grateful to Phil Reay for coming along to record the numbers for us this time, and maybe next year we will see him back at full fitness and running in the league. 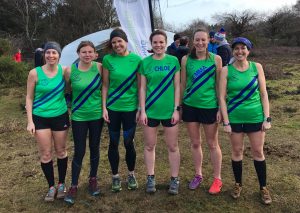 This turn-out and set of results was a fantastic end to a great season in the Hampshire League. It would be brilliant to see even more runners join us next year.

The fixtures are generally on the first or second Saturday of the month, and run from October to February, so pencil in those dates! I’m off to treat myself to some new spikes.