SHE baked the cakes, she managed the team, she ran the race and now she’s done the write-up! Sam Whalley reports from Prospect Park on another momentous weekend for Reading Roadrunners…

WHEN I first joined Reading Roadrunners in 2015, all I heard was that the Sunday Thames Valley Cross Country is the league to do; that Saturday one is really competitive, only for the fast people.

Having been inspired to join a club, however, by my time watching my daughters run XC in that very league, I was not deterred, and, despite not being a fast runner, I have never felt unwelcome.

We’re always excited, therefore, when the Hampshire League fixture is the most local one, which Reading AC host in Prospect Park, because it provides an ideal opportunity for our club members to try the league for themselves.

And such has been the buzz around all XC fixtures this year, that we were overwhelmed by the number of Reading Roadrunners who wanted to come along. 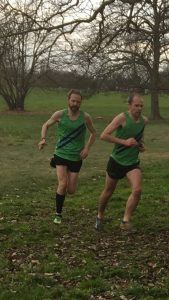 Some were donning their green vest for the first time. Others were completely new to XC, and weren’t sure what to expect, so the usual advice was issued: the front end of the race will be incredibly fast, your mile/km splits will mean nothing, and try and catch the person in front.

We can always rely on Rob Corney to try to do just that, a new streamlined haircut helping him to lead the senior team home.

Despite nursing a rest-day-induced (his claim) niggle, Rob had a storming race and was third overall, only seconds behind two Aldershot runners, and an improvement on his fourth place here last year.

Rob was followed in by Jack Gregory, with a really good run, in an excellent 12th, his best position so far.

With this being the fourth fixture of five, the biggest hope for silverware this season lies once again with the vet men, currently sitting at the top of the league. And they did not disappoint.

You know you have a strong vets team when the likes of runners like Lance Nortcliff and Andrew Smith are superfluous to the scorers.

The scoring this time was well taken care of by a tightly-packed Ben Paviour (20th), Mark Worringham (22nd) and Seb Briggs (26th), as second, third and fourth vets. Seb’s sprint finish battle with an Under 20 runner from Aldershot was a real highlight, but the younger legs won out in the end. 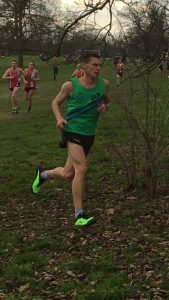 These first five finishers put the senior men’s team in second place, and joint fifth on aggregate, while the vet men were again first, and remain at the top of the table.

Although the scoring was completed by these five, the job of the rest of the team — as there were 31 more men! — was to keep on pushing and keep the scores of the other teams down.

David McCoy (the younger), was next, with Lance, Ashley Middlewick (nicely warmed up from his cycle from Frimley Lodge parkrun), Andrew, Pete Jewell, Brian Kirsopp, Matt Davies and Calum Pratt all managing top-100 positions. Pete and Brian were also among the top 10 for the M50 age category.

Standing at the finish line, it was clear that every single person had run their absolute hardest, and the efforts of all were appreciated. I’d have liked prior knowledge that David Clay always finishes his races a little unsteady on his feet — gave me quite a worry there, David — with his competitive spirit leading him to try to chase down a Reading AC runner.

There are too many names to mention, but full results are here: https://www.hampshireathletics.org.uk/results/2019/20190112_hlmen.html

As usual the women’s race, earlier in the afternoon, was less well attended, and for some reason was the smallest women’s field of the season so far. Nevertheless, our club was out in force, with 19 of us making up a significant proportion of the competitors. 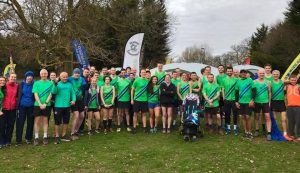 These three women placed the senior women in sixth, and seventh on aggregate, a really pleasing result, especially since we were missing two of our strongest performers, Chantal Percival and Bithja Jones, due to injury.

As I was obviously still running, I didn’t see our second vet, Sarah Dooley, and XC newcomer Katherine Foley cross the line, but they were both awarded the same time, so no doubt there was some friendly rivalry there.

They were followed by Liz Johnson, delighted to be making the scoring vet team on her XC debut, despite her pre-race fear that she would be rubbish (not her exact words). The vet women’s team was fifth, and is also fifth on aggregate. These senior and vet results were our best of the season so far. 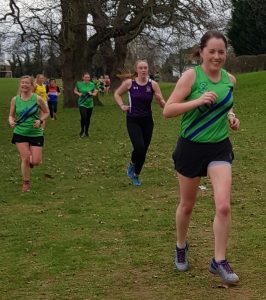 There were some stand-out performances, with Angela Burley, Katie Rennie, Sarah Harford and Claire Seymour all making the top 100, and Alice Carpenter, Beth Rudd, Chloe Lloyd, Tina Woffington, Divya Samani and Ruby Lee all new faces in this league, alongside the experienced Hampshire League runners Maureen Sweeney and Cecelia Csemiczky.

Tina reported that she had loved it, and Ruby thanked those who had offered her support and encouragement. Cecilia was just a little disappointed that she hadn’t managed to beat her nemesis, Marilyn from Victory.

All in all, a fantastic set of results from both men’s and women’s teams, and the camaraderie on the day was exceptional.

The next and final fixture of the season will be at Dibden Inclosure in the New Forest, on Saturday, February 9th. All members welcome; let’s try to finish on a high.

Note: You do have to be a fully paid-up member, and wear a club vest/T-shirt.