ANOTHER huge turn-out of Roadrunners was rewarded with two individual triumphs at the latest TVXC race. Once again ladies captain Sam Whalley reports from the front line…

IT WAS a cold but sunny day that brought 64 green-vested Reading Roadrunners, and one guest, to Tadley for the penultimate race of the Thames Valley Cross Country League season… a pleasant improvement on the snow we had experienced there last year.

We had a number of first timers — Brooke Johnson, David Clay, Samuel Alsford, Renée Whalley, Bryan Curtayne, Oliver Watts, Katherine Foley, Liz Johnson and, somehow, Lynda Haskins, who, for the first time ever, had found herself with a free Sunday. 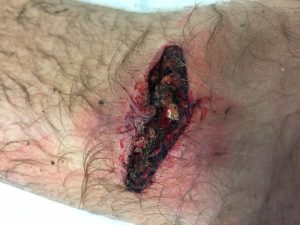 It was a dramatic debut by David, who bravely finished the race with blood pouring from his knee, an injury (right) which required seven stitches at the A&E.

David hopes to make a full recovery in time to resume plenty of training for his big spring target, the Hamburg Marathon on  April 28th.

Back at the race, some green vests had been borrowed, and Tina Woffington was so excited to be participating in her first TVXC of the season that she had forgotten her £3 entry fee and had to have a whip-round.

The Tadley course is not a great one for spectators, giving only really one spot close enough to the start/finish area that is wide enough for people to congregate, and even that is a hilly trek. Still it was nice to hear the cheers of our supporters, especially on that tough second lap. 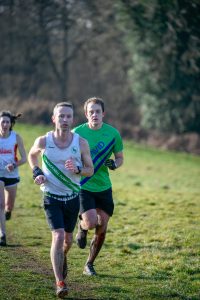 The lack of mud, due to the recent dry weather, and the resurfacing of the usually ankle-deep bridleway, did not seem to make the course less energy-sapping, and XC spikes were a definite advantage on the hills. At least it is one of the shorter courses.

Team results are still being processed, but we can delight in the fact that both the first man and first woman were in green — whoop!

Rob Corney is used to winning races, and was wondering who he could be running with; it can be pretty lonely out at the front, apparently.

Gemma Buley played down her first TVXC win by saying that some of her usual competitors weren’t there. Smiley photographic evidence would also suggest that Gemma just had a great run. 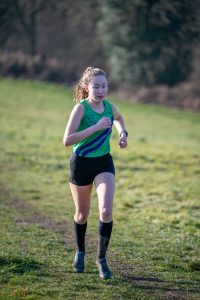 Usher (vet). Mark claimed he had not raced well, but fifth place is not so shabby.

I think it’s time we all started having whatever Brian is having for breakfast; he has to be one of our most in-form runners at the moment.

The women’s scoring team was made up of Gemma, second-claimer Renée Whalley, and regular vet scorers Mary Janssen and Lesley Whiley.

Sixteen-year-old Renée (left), being used to running the 4-5k races of the Hampshire League and other championship races, was pleased to find herself well in the mix with the senior men, despite the longer distance of 5.3 miles.