ROADRUNNER Paloma Crawford is thanking her lucky stars after a week which started with heartbreak, continued in high drama… and ended in jubilation.

Paloma, who has set new personal bests at almost every distance this year, had targeted last month’s Venice Marathon, hoping to chalk up another good time.

“Having run Brighton and Malaga last year, I was keen to look at another overseas event this year,” she said. 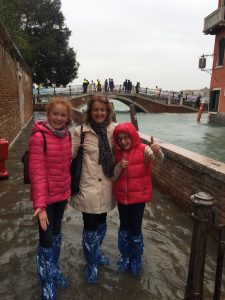 “The Venice Marathon coincided with the school half-term holiday and that seemed sufficient justification to run there.

“With my family keen to support me in Venice – unlike at the Liverpool Marathon in May when they opted to watch Prince Harry and Meghan Markle’s wedding on the TV – so the flights and hotel were booked.

“In the last few months I put in the hours and the miles in training necessary to get me ready for Venice.

“Training was going well but on the day before our flight I was diagnosed with a hernia and advised not to run by my consultant. I was absolutely gutted.

“Still, with the flights and hotel booked we flew out to enjoy the delights of Venice and to provide support, as spectators, to those running.

“The weather leading up to the Marathon was generally good, which was a blessing for the sightseeing part of our trip.

“On the Friday before the event I visited the race expo to try to defer my place to next year. Unfortunately this wasn’t possible, although I was given my race number, a bag of goodies and a T-shirt, which usefully did not have ‘Finisher’ on it.

“After purchasing a neck warmer, I was tempted to buy new running shoes and gear to race on the Sunday. However, my husband intervened just as I produced the credit card.” 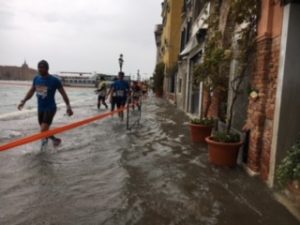 Come race day, the weather in north-east Italy took a massive turn for the worse, and Paloma and her family were able to witness the drama unfold as the closing kilometres of the race were covered by a quickly rising tide of floodwater (left and below).

The later finishers faced life-threatening conditions and a total of 17 people were killed in the region over the weekend by a combination of storm-force winds and torrential rain.

Paloma (pictured above with daughters Maia and Anna) said: “Although I couldn’t run I am pleased that my family and I stood on the penultimate small wooden bridge to lend our support to those running in the worst weather conditions ever for the event. 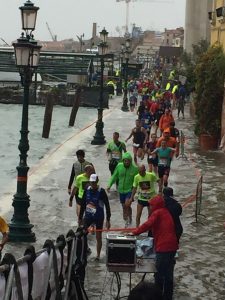 “As the elite runners were finishing, conditions worsened and I felt truly sorry for the club runners and those running for their chosen charity. Many simply took off their running shoes to wade through ankle-deep water.

“I was very disappointed that I was unable to run, but looking at the conditions I was also quite relieved. The Venice Marathon remains unfinished business and I will return to complete the course.”

But Paloma’s story has a happy ending, for she flew home to discover that she had drawn a lucky ticket in the Roadrunners’ marshals’ ballot and has won a place in the 2019 Virgin London Marathon.

“I was absolutely delighted,” she said. “I never win anything, so it was a total shock. Now I need to recuperate from my hernia operation later this month and begin preparations for London next April, where I pray the weather will be more favourable.”