UK, Europe, North Africa, even New York we have ran them all, but now was time to return Stateside and a good for age qualifier gave us a chance to have a crack at Chicago. 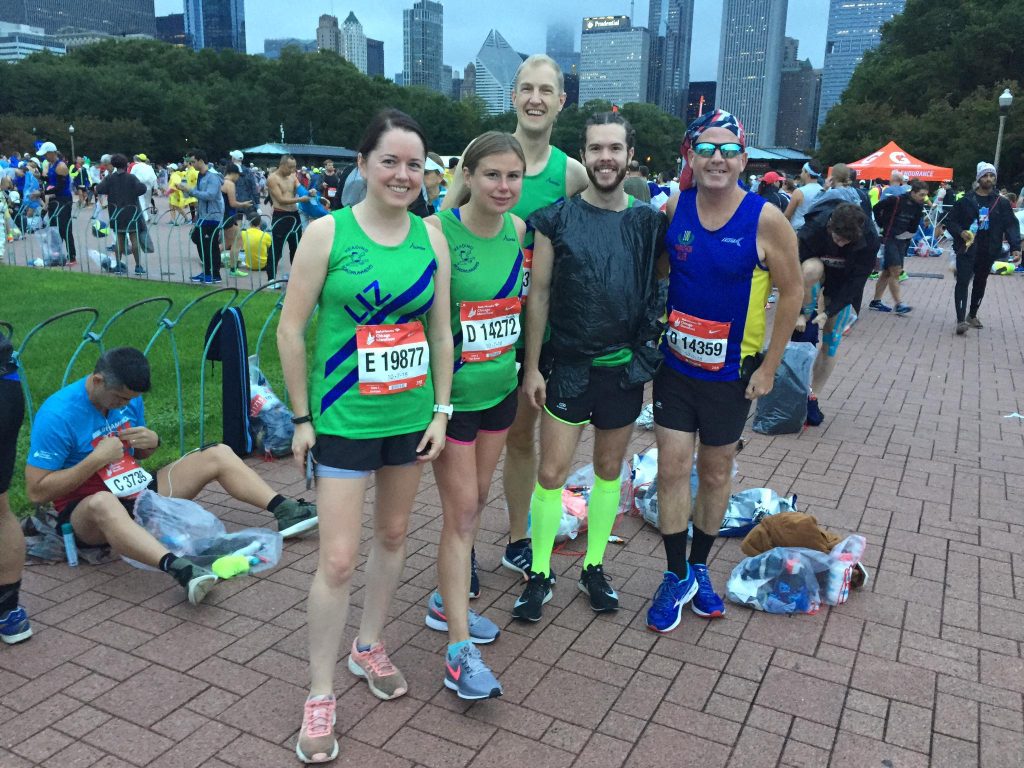 We weren’t the only Roadrunners on this trip, amongst the other participants were Brooke and Elizabeth Johnson, David McCoy, and Simon Davies, and some of other friends from the 100 Marathon Club plus fellow traveller & runner Peter Mizzi .

It’s as much about the city & culture as the race so we decided we’d spend a week visiting and believe me it was a week well spent. We can’t recommend this city enough as it can be described with most superlatives we can think of.

For the first few days we were fortunate enough to stay with one of Caroline’s friends Sandi who she had last seen 18 years ago. We’d stay with her and her family on the outskirts of Chicago and then spend the remaining time Downtown. We therefore were able to experience the city from a local as well as a tourist’s perspective

Sandi had a very nice meal prepared when we arrived and was great for them both to catch up, they were just as interested in our culture as us in theirs so we spent most of the evening comparing different American & English versions of words over a home cooked dinner followed by cookies.

The next day it was down to business so we headed to the expo which appeared to be similar to the expo in London. We walked there with David McCoy and his girlfriend Christina. It was our lucky day as we got to meet Paula Radcliffe and also get our bibs personally signed.  Caroline had previously met her at a running event sponsored by Nike back in 2014 but nothing beats having and been able to treasure her sign our very own Chicago race numbers. We may even get to frame then (eventually).  Riddled with jet lag we headed back to Caroline’s friends for an early night and some traditional Deep Pan Chicago Pizza (a very thick crust and what appears to look like a great pie rather than a Pizza), but it was delicious if not calorific. Just the tonic for a marathon the next morning (Hope no nutrition experts are reading this) 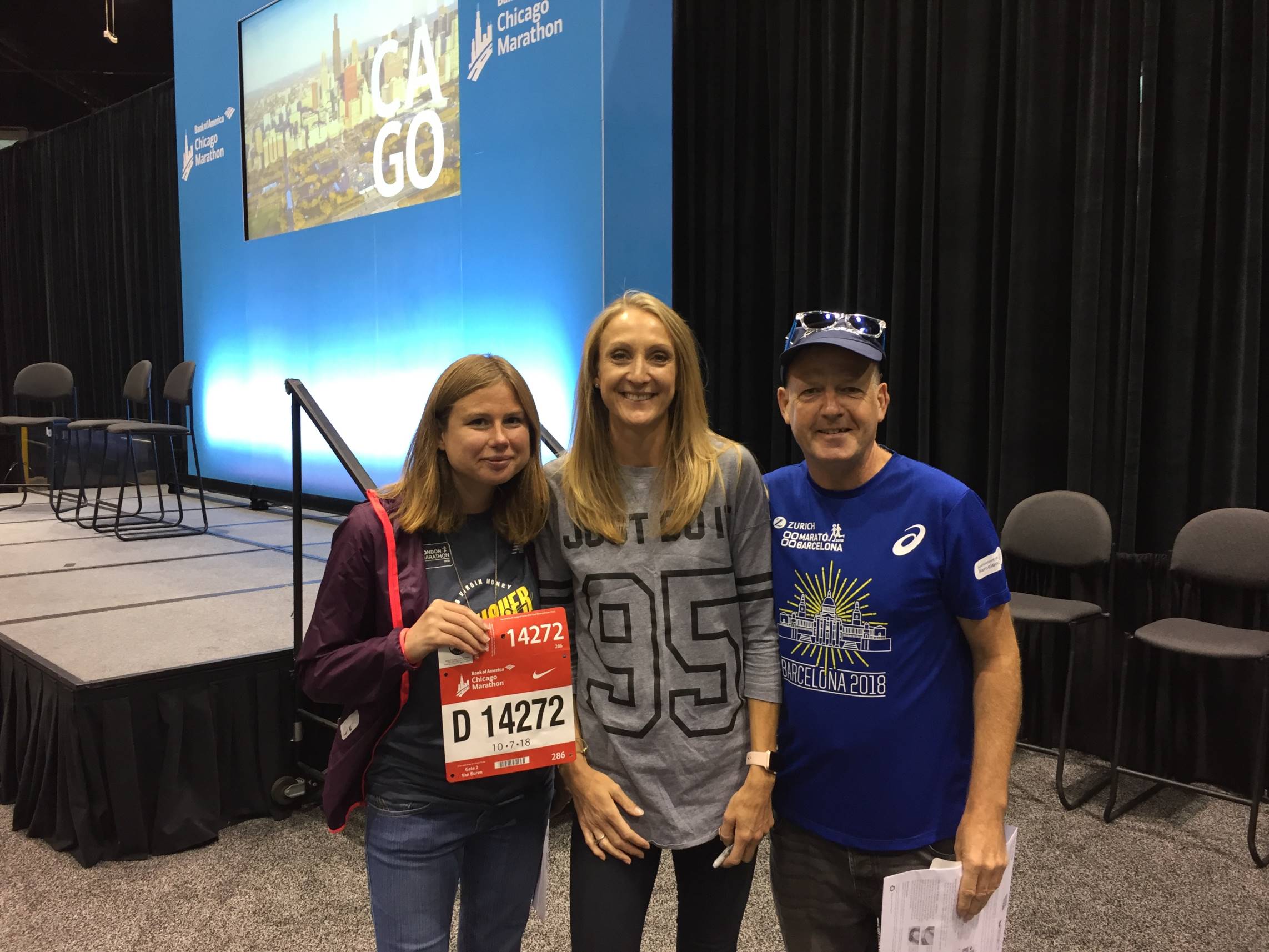 Next morning we had to rise before sunrise at 4.15am, it was dark and raining on our subway ride into downtown. We did love the trains in Chicago as it felt like we were on a movie set high above ground. The transit system is officially nicknamed the “L”. It’s elevated subway with open air segments dates from the earliest days of the elevated railroads.

We arrived at Grant Park (the location of both the start and the finish of the marathon) just before 6am and thankfully the rain stopped. As it became light we just had a few clouds covering the skyscrappers. The location of our bag drop was directly next to the Buckingham Fountain, this is a great Chicago landmark dating back to 1927 when it was announced as the largest fountain in the world, the fountain itself represents Lake Michigan, with four sets of sea horses (two per set) symbolizing the four states: Illinois, Wisconsin, Michigan and Indiana that border the lake.  Obviously this became a good spot for photo opportunities and videos.

Both Paul and I had the same start corrals and our start time was just after 7.30am.  With some good music and the announcement of Mo Farah on the start line, there was a good buzz and feeling of excitement as we eventually crossed the start line. Unless you’ve ran a big city marathon the feeling of euphoria as you start is hard to explain, but I guess it’s part of the addiction we have to marathon running.

We both found the marathon to be pretty similar to New York, although Chicago runs through 29 different neighbourhoods and New York runs through 5 boroughs.

All the different neighbourhoods allowed us to experience and run through different cultures, architecture, historic buildings and residences. Caroline enjoyed the neighbourhood of Pilsen, we got to see and hear Latin American music & dance, and the Mexican’s were great spectators.

Paul liked Chinatown, festive and bright and full of character. We entered Chinatown through the Chinatown gate at mile 22. We were greeted by cheerleaders, Chinese music and dragon costumed dancers.

It did rain a little whilst we were running, it was quite a heavy downpour at one point but it did not dampen our spirits  as the constant cheering crowds & music were a welcome distraction. Thankfully the rain stopped and we were able to cross the finish line in dry conditions.  As 45,000 were running this event, the finish was slightly congested as to be expected, but the organisers coped with this so well and didn’t rush us along as they do in so many events. 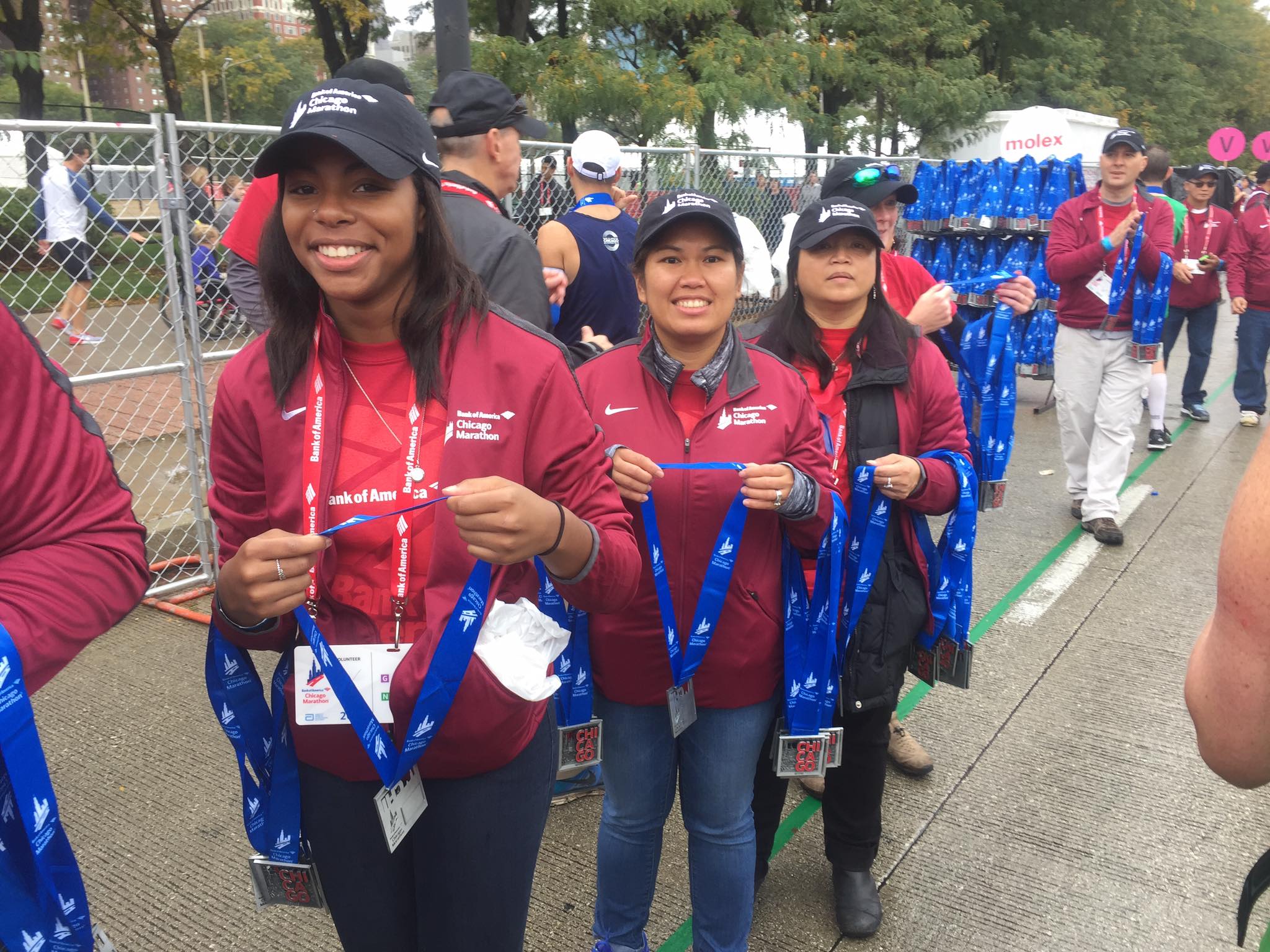 Caroline finished in 3hr 47mins which was her 97th marathon and Paul finished in 3hr 54mins, (we’ve lost count how many he has now done…) J
David McCoy & Brook Johnson both ran a sub 3 hr with a brilliant 2:44 & 2:55 respectively. Elizabeth Johnson also ran an excellent time for her debut marathon finishing in 3:58 whilst Simon Davis ran a 5:14. 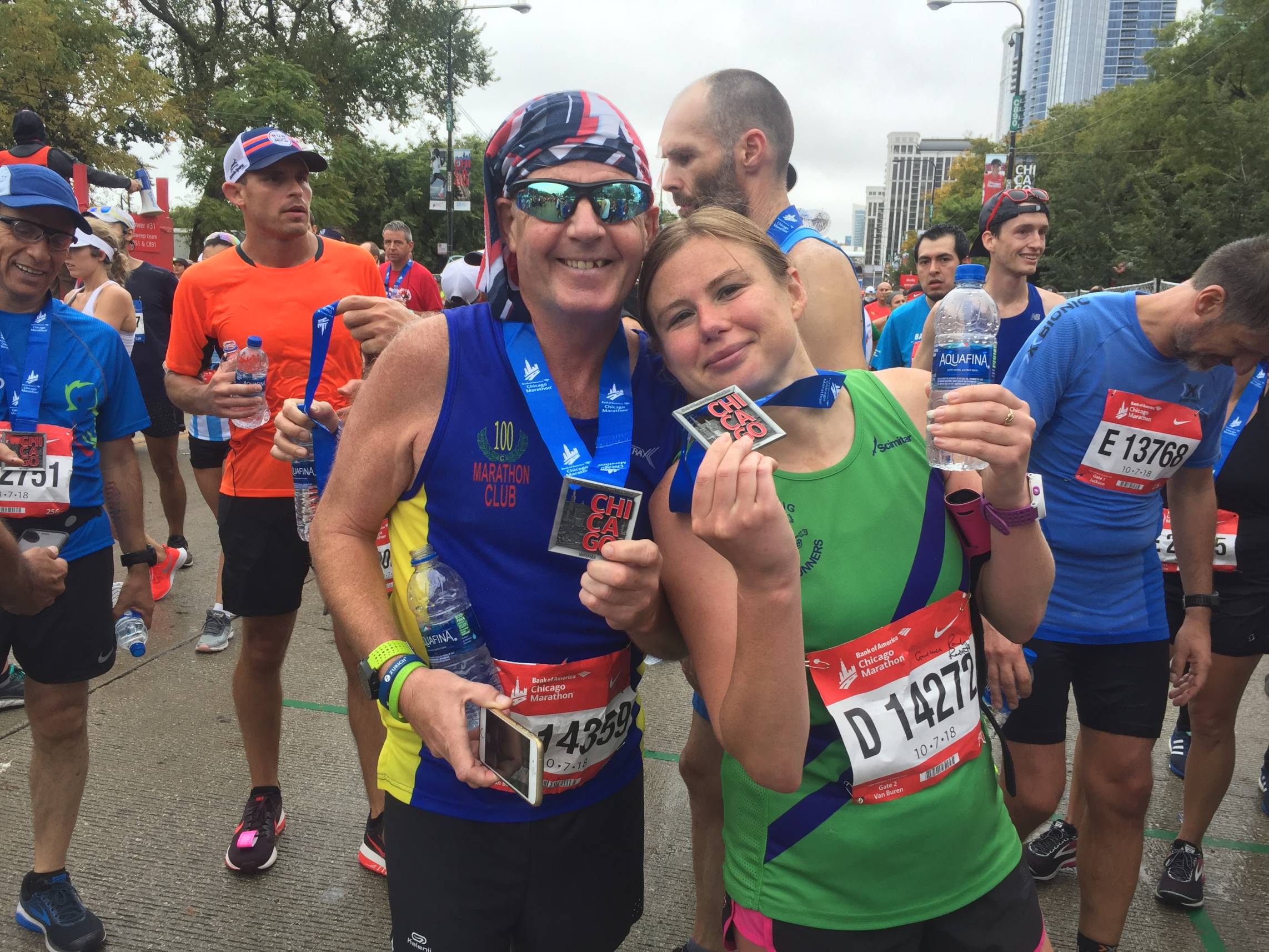 As usual we finished pretty close together, Caroline had enough time to take a few photos and have a little chat with fellow runners.  We walked to collect our medals and grab our goody bags.  There were also bananas, baby tomatoes and something more refreshing, a free can of the locally produced Goose Island IPA, this certainly went down well.  The girls giving out the goodies were very cheerful and broke into song making us smile; I think they felt like celebrating with us.

After the race and when we had warmed up a little and got changed, we headed over to the post-race party which was held on Butler Field, about a 5 min walk across from the fountain and baggage area. We caught up with Simon, Liz and Brooke and also some of our other pals including Peter Mizzi who was on top post race form as per usual and even managed to supply us with American styled slippers 🙂 . We all agreed that it was a fantastic experience, more so for Liz who had just completed her first marathon.

Rather bizarrely the weather in Chicago throughout our stay went from one extreme to the other, heavy rain storms to hot and sunny at 29c and then down to 10c on the day we came home.

After the marathon from Monday onwards and when we relocated to a hotel downtown we tried to visit as many of the local attractions as we could, our hotel was perfectively located as we were just off the Magnificent Mile.

The Architect boat tour is one we’d definitely recommend as give an amazing insight into the history of the city whilst cruising the river to a backdrop of high rise buildings. This we followed with the excellent Chicago Riverwalk joining some pals from the 100 marathon club. 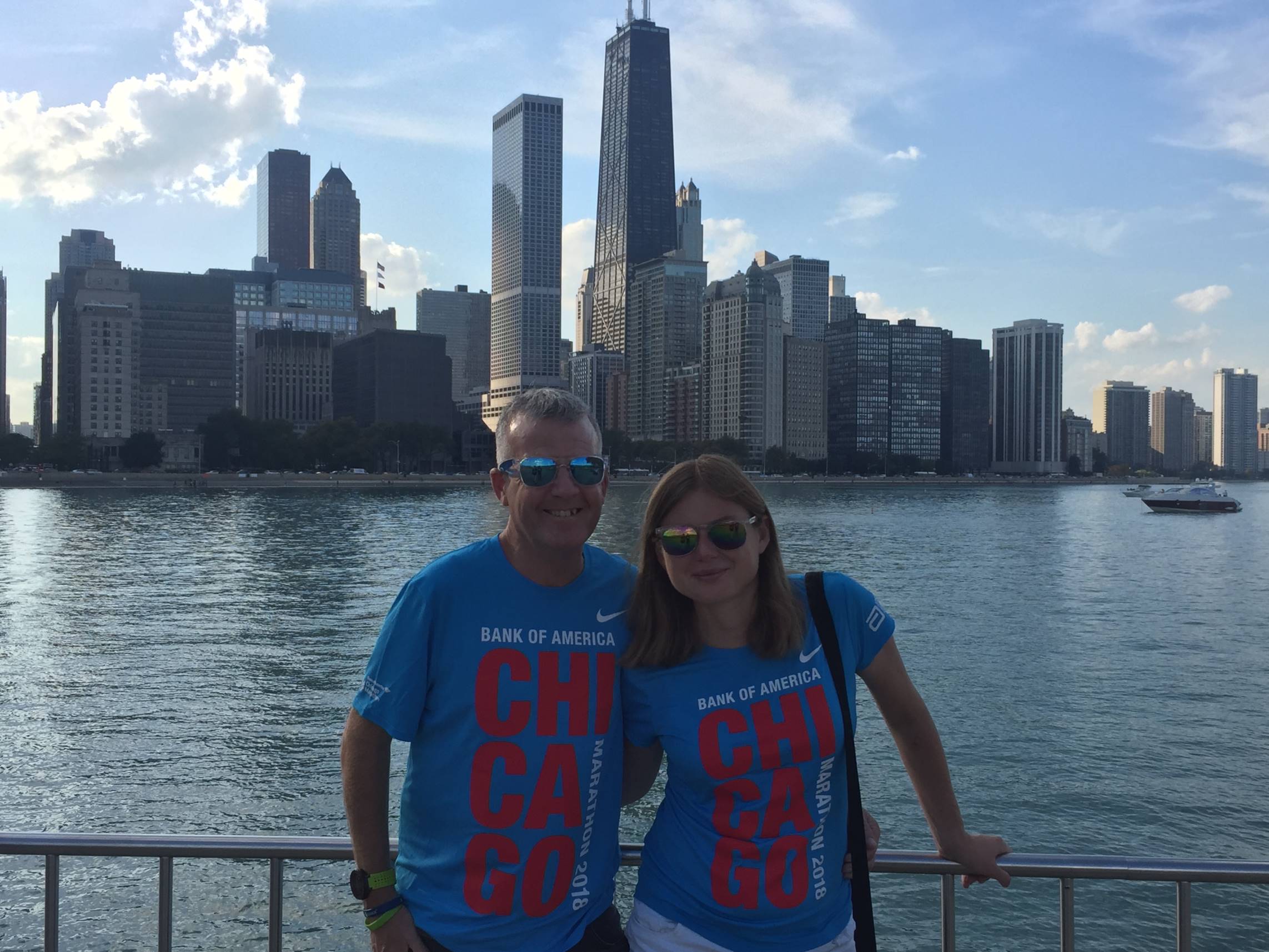 Another great trip was the Languitas brewery tour brought to us by a very entertaining and passionate guide. This commenced from a room that wouldn’t have looked out of place in Charlie & the Chocolate factory. We half expected Willie Wonka to greet us on arrival.

We even visited Chicago theatre land to see the excellent Tootsie brought to life for a stage musical.

The Navy Pier is like a city within a city and also a must see. Best time to visit is in the evening with its many restaurants, boats and attractions plus great photo opportunities against the Chicago night time sky line. It’s just buzzing with life and in a league of its own.

No trip would be complete without a trip to the Hancock Tower to visit the bar & restaurant Signature room on the 95th via an elevator that reaches it in 40 seconds (the fastest in the Western hemisphere so rumour has it ). We enjoyed it so much we visited twice, the last time watching an unforgettable sunset across the city whilst sipping cocktails.