Well, almost…. Some of the Dragon McDragonboat crew had been out the previous night and only returned home in the wee hours of Sunday morning. They were, obviously, very tired, and averse to sunlight, loud noises, the smell of food – even moving was difficult for them. Some didn’t make the 08h30 start time and quite a few were probably over the drink-paddle limit. Pete the builder was even grumpy. Poor loves. 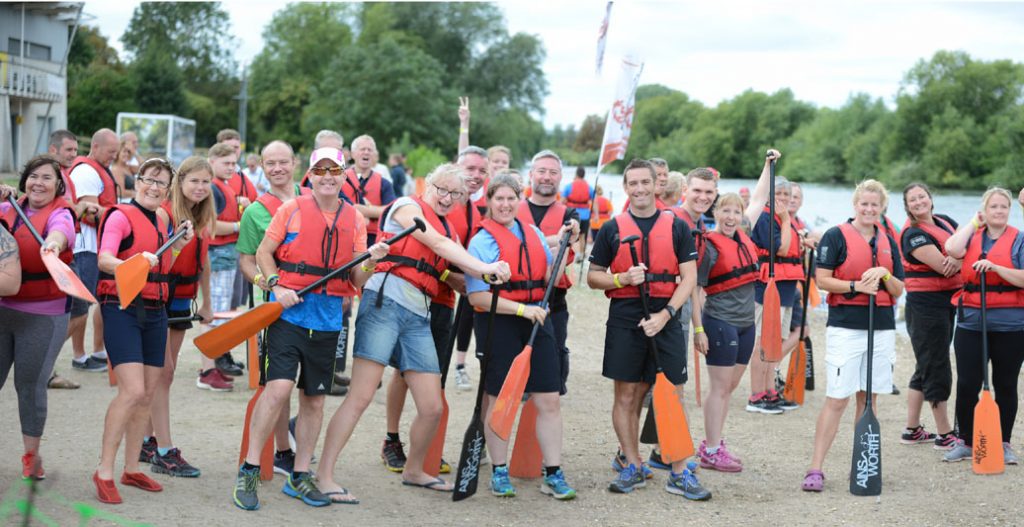 But the rest of us – our bodies are a temple – were rearing to go. Admittedly, we were a rather motley lot, not easily identifiable as we had no uniform or cool outfits (did you see the pics of Darth Vader & his Imperial Guards…and Peter Higgs’ team in purple wigs? We definitely need to re-think our look for the 2019 competition.) But we were brimming with enthusiasm, under the leadership of the lovely Hannah. Having participated in the 2017 event, Hannah wanted us to beat the 1:03 race time achieved by RRs previously, and we were confident we could rise to the challenge. As a great ‘team building’ event, with no experience required, we felt certain our physical and mental preparedness as runners would give us the competitive advantage over the lardy office-based worker teams. 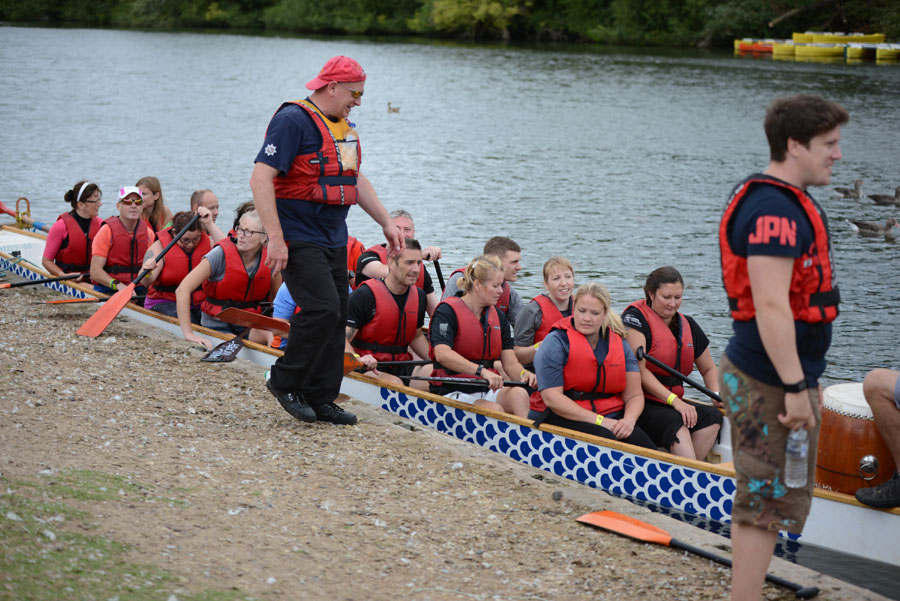 The day started with quite some warm-up. Some lithe firecracker leapt onto the stage and put us through our paces. We had to limber up for the races, she said. I started to feel a little frightened at this point, to be honest. Just how much paddling was actually involved if we needed a workout like this…? The other issue was that she was on a clean, flat stage, whilst we were rolling around on wet, lumpy goose-poo grass. Most of the Dragon McDragonboaters weren’t sufficiently fit or supple to get through the warm-up and had to retire to our marquee early for a rest. And a bacon butty and more water. Some needed a nap. Some of the team were also interviewed by the famous Debbie McGee for her radio station, BBC Radio Berkshire. 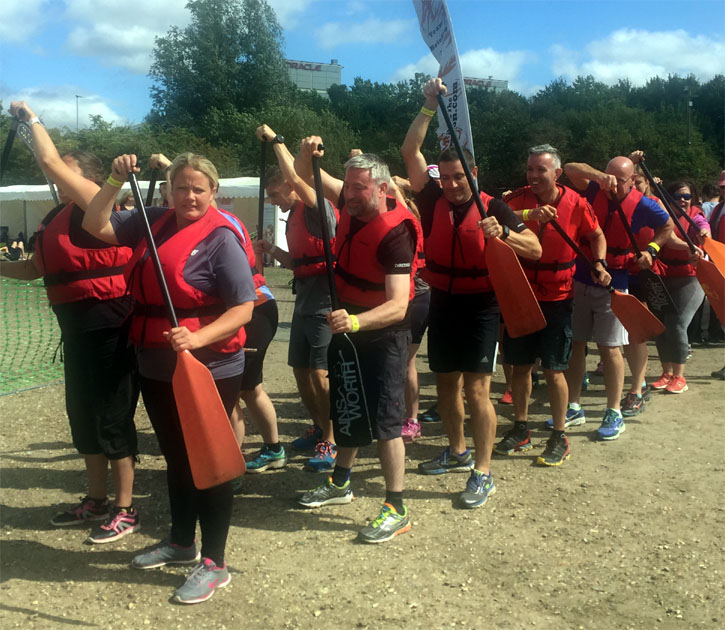 We were in the first race. Boat 3, I was the drummer. We had our safety briefing, put on buoyancy aids, and attempted to board our dragonboat. This is very dangerous. The boat wobbled every time one of our athletes climbed on & there was definitely a lack of coordination staying seated & holding the paddle whilst trying not to capsize. But we made it and cast off, ready for our first race. Being the drummer is a very important role. You are there to help the team coordinate their strokes, to increase the paddle RPMs, and to give encouragement. Nobody takes a blind bit of notice of you. It was each to their own, hacking into the Thames as if the excess splashing and gnashing of paddles would improve our speed. Result Race 1: 1 minute, 25 seconds (second place in our heat). The crew felt relief and elation, but Hannah was doing the maths. How were we going to beat the previous year’s result…?

After a lengthy period of rest and recovery, the RR Dragon McDragonboaters were on the water again, this time under the command of Pete the Builder. What could possibly go wrong… Well, our improved time of 1 minute, 15 seconds (second place in our heat) was less to do with the drummer and more to do with the extra paddle power and coordination. Our helmsman was from way up North and we were rather terrified of this giant. No mucking about on this race. Other than Pete Cooke, who decided he didn’t need his paddle and it had to be retrieved by the Safety Boat somewhere near Henley. Pete claims to have participated in the race and alleges he only lost his paddle after the finish when Sheryl Higgs viciously knocked it from his hands, but I know Sheryl and she is all sweetness. Next year, I suggest we put a neck strap on Pete’s paddle, like a camera, and he’ll do much better.

Well, you would think that by Race 3, we would have nailed this dragonboating malarkey, that hangovers would have subsided and the competitive nature of us runners would lead us to victory, but you would be wrong. Race 3: 1 minute, 26 seconds (last in our heat, by quite some way). I’m not saying that it was because we had a new crew member in Kevin Bilsby, because lots of things went horribly wrong in our final race and I don’t think we should just blame Kevin. Poor Hannah. We had really let her down. Well, we had let ourselves down. None of us looked up when paddling, there was zero coordination in our strokes, I think we were exhausted from having to use our upper bodies so much. We are runners after all.

Feeling a little deflated by our poor performance but exhilarated we wouldn’t have to do another race as we were a good 15 seconds off the teams in the Finals, we had a debrief of the day and came out with a few points to take away with us. We learned: 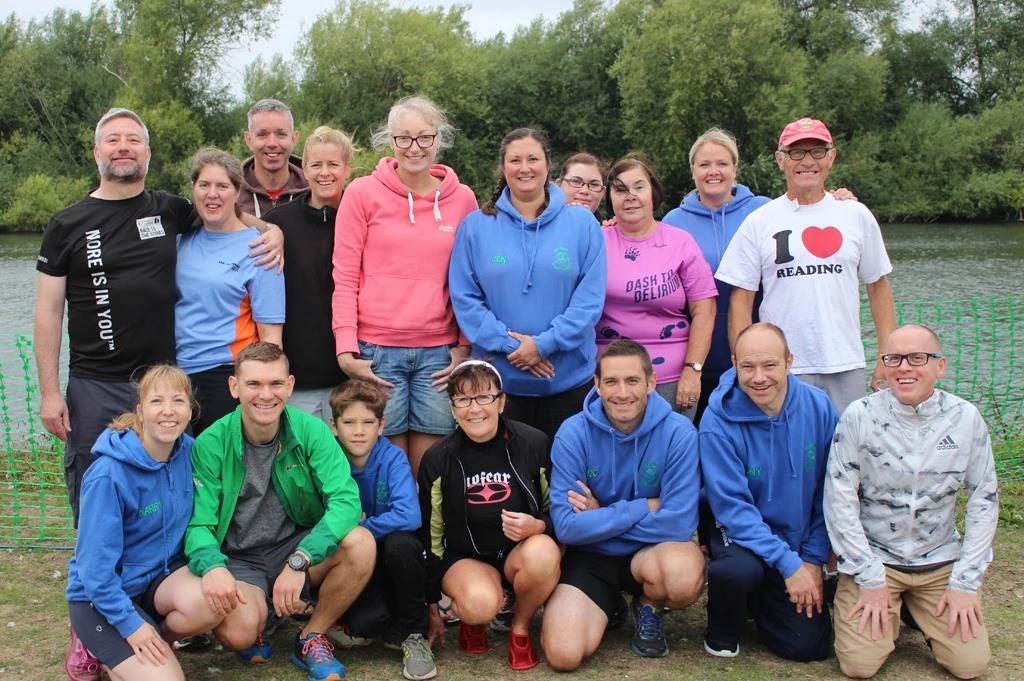 And, quite fascinating, was that the course length this year was longer than in 2017 and there was no way we would break the RR PB of 1:03. Happy Hannah!

So, well done, awesome Dragon McDragonboaters. A great time was had by most of us and, hopefully, those whose bodies were in a (self-inflicted) sub-optimum state are now fully recovered and will know better next time. Or not!