On the 1st March at 9am I was on the computer getting my entry sorted for the Medoc marathon. After missing out last year as it has already sold out by the time I was home from work I was determined that I was going to get in this year! This race attracts people from all over the world and I was lucky enough to get in alongside 4956 people from France, 1081 other brits, 305 Japanese, 25 Italians, 2 Mexicans, 6 from Iceland, 1 Kenyan, 17 from New Zealand, 87 Canadians and many more nationalities represented. 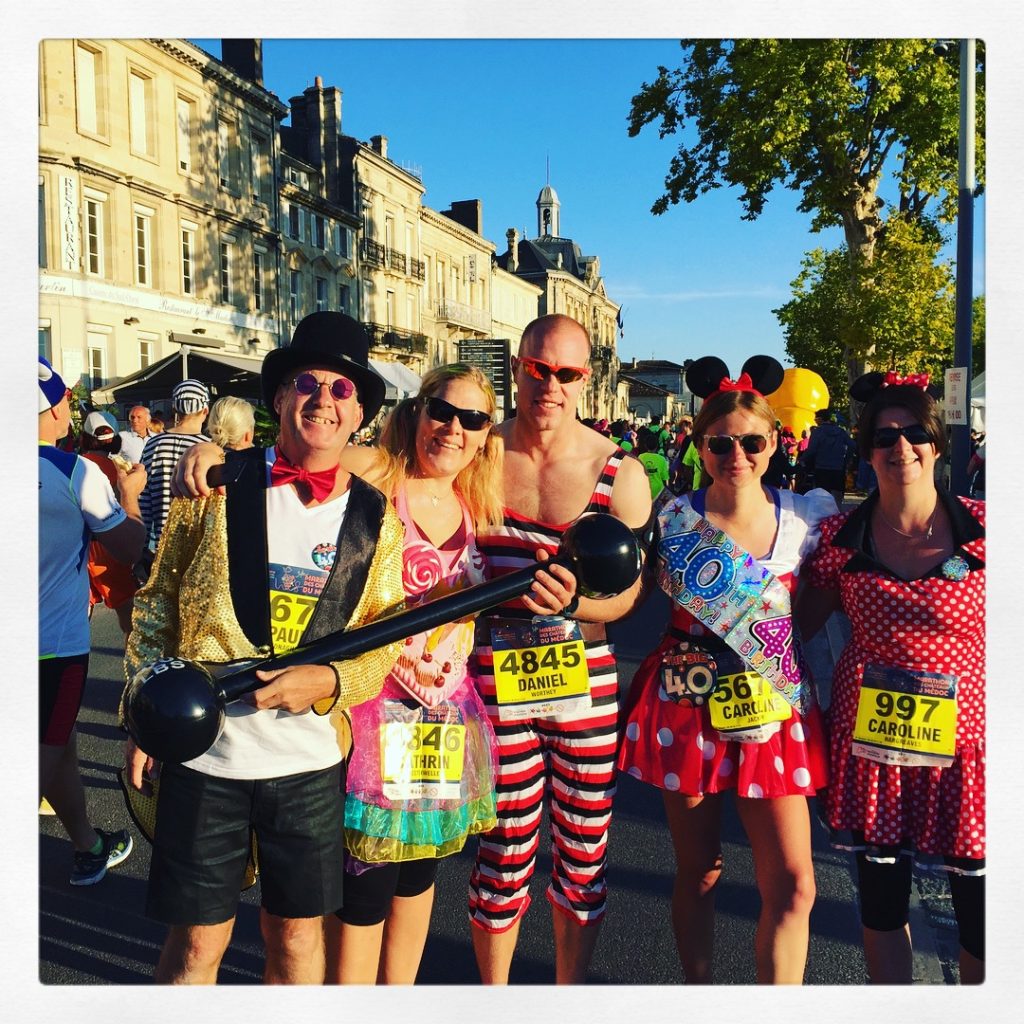 On Friday we flew out of Gatwick and landed at Bordeaux airport and jumped straight on the bus into Bordeaux centre to check into our hotel and then head to the expo. The expo is where the race starts, which is about an hour out of town on the train and then a 5-minute walk. There is an option to pick up your race number on the day, but the expo is absolutely the best expo I have ever been to and so well worth going to the day before. I have never been to an expo before where there is wine tasting along the road to the entrance and a lot of the other race stalls giving away wine, beer and cider along with the flyers, it was setting the tone for the next day.

Race day is an early start, there are buses laid on for the event that you need to book in advance (only 7 euros) and so it was a 6:15 bus that we boarded to take us out for the start line. There are 8,500 participants in total, pretty much all in fancy dress and with the theme being amusement parks there was so really big crazy carousel and fun fair style floats at the start line. With it being Caroline Jackson’s 40th birthday, Paul ensured that Caroline was appropriately decorated with a 40th birthday sash and giant badge whilst we all wore smaller 40th badges. 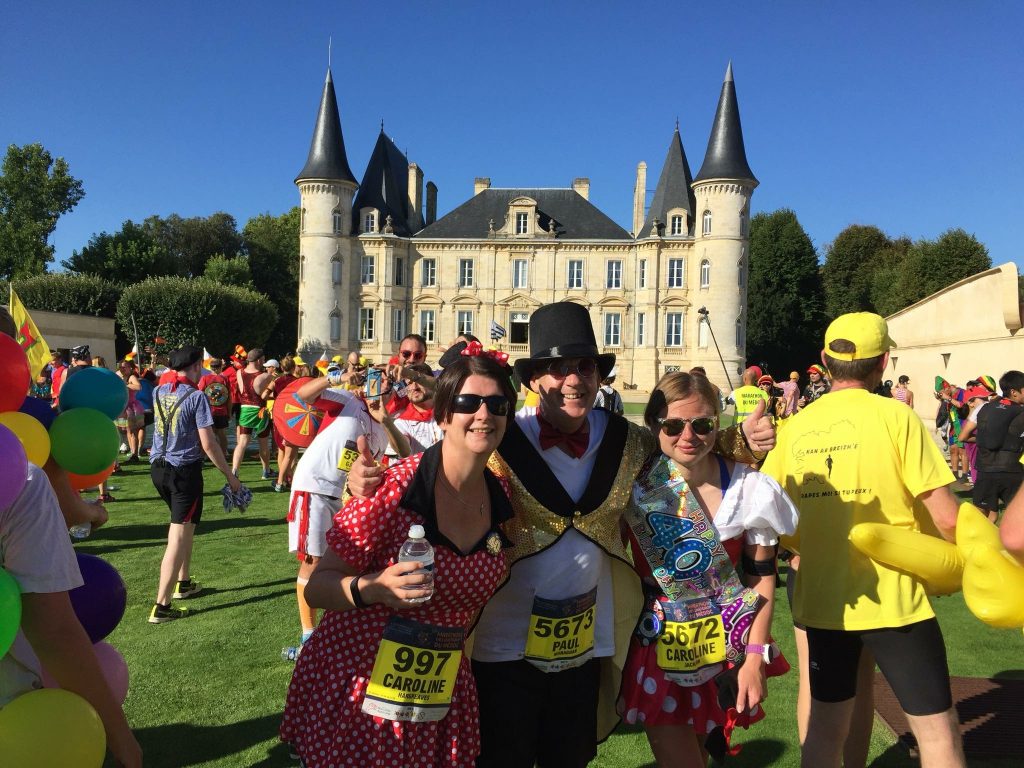 I lined up with Caroline, Paul, Cathrin Westerwelle and her boyfriend Dan and the atmosphere was just crazy, with music playing and fighter jets flying above the crowds and helicopters filming everything, I have never experienced anything like it. The race started and we ran into the town where there were loads of people cheering everyone along and filming everything, within half a mile of the start you hit the first wine stop, which we decided to skip to give us a chance to split away from the chaos as the first few miles you can bottle neck trying to get through the town. Once you get out of the town and into the first wine yard there is another wine stop and this one we didn’t miss! We then started off again and came to the first chateaux where people in duck outfits were in the pool which was hilarious, Paul and Caroline managed to get themselves interviewed by some reporters. Over the next 20ish miles it was pretty much all going through numerous wine yards and chateaux with more wine stops than I could possibly count. It was a really hot day and it fancy dress this did make the race even more challenging but with so many opportunities to stop and get a drink and various snacks it made the heat more bearable and they did have water stops with every wine stop as well as a few extra water stops too. A lot of the chateaux also had various types of live music, which was good to have a dance on the way round. Around 16 miles one of the wine fields was full of balloons that was just an amazing sight and at mile 20 there was a field that was full with about 8 different wine tables that looked like village fete. The last 3 miles is just one long stretch of road, that in the heat felt like it was twice as long as that but it had an Oyster stall about 1.5 miles from the finish and then an ice cream stop about half a mile from the end, I swear I have never appreciated an ice cream so much in my life. 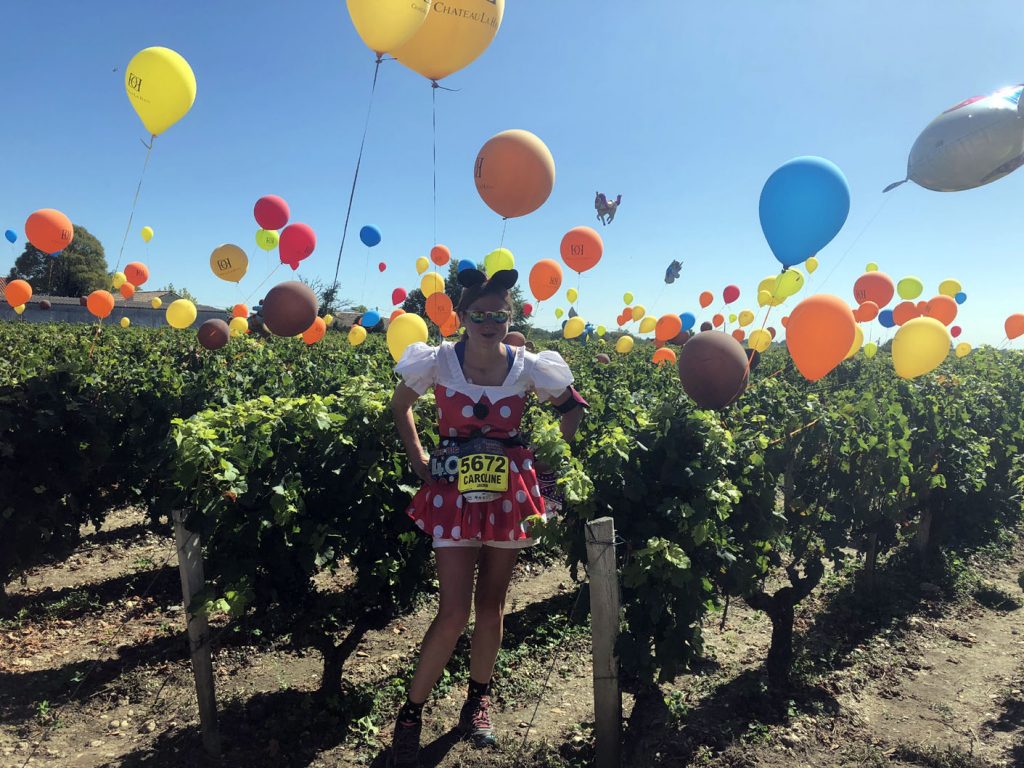 At the end of the race we were given the best goodie back ever, a bottle of red wine and a Medoc marathon designed cool bag. After the race was finished there was only an hour until our coach was taking us back into Bordeaux and the car park was about a 20-minute walk away. Unfortunately, they had the worse organised bag drop ever and so I only had the chance to finish and get my bag and then head straight to the bus and so no party tent for me this year! Next time I would look to get the train back and so I would have time to chill out before having to head straight back. Cut off for this race is usually 6 hours 30 minutes but this year this was ended to 7 hours due to the heat. This is a race where you would want to be out on the course as long as possible and make the most of all the wine stops, there was one rose stop and one white wine and the rest are all red wines, I drank more red wine on this race than I have ever drank in my whole life! This race definitely has to go on the to do list for anyone that enjoys wine and fancy dress! 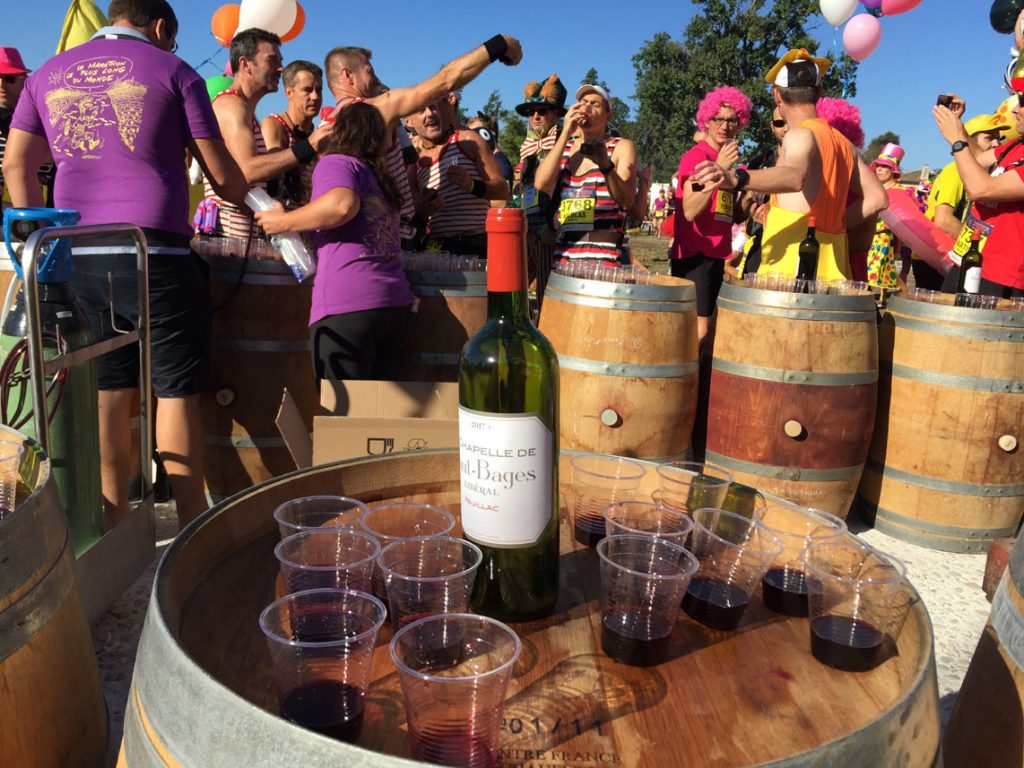