An Insight Into 1990’s Fell Running– Report by Kathy Tytler

When I first started running in the early 1990s I used to run the Great North Run (GNR) every year.  I was born in Newcastle, so my journey to the north-east had a dual purpose; returning home to see the family and taking part in the 13.1 mile shuffle from Newcastle to South Shields.  One year there was an invitation in my race pack to take part in ‘The Great Mountain and Marathon Double’, running up and down the Simonside Hills in a Fell Race from Thropton, Northumberland the day before the GNR – a new experience for me that was too good to miss. 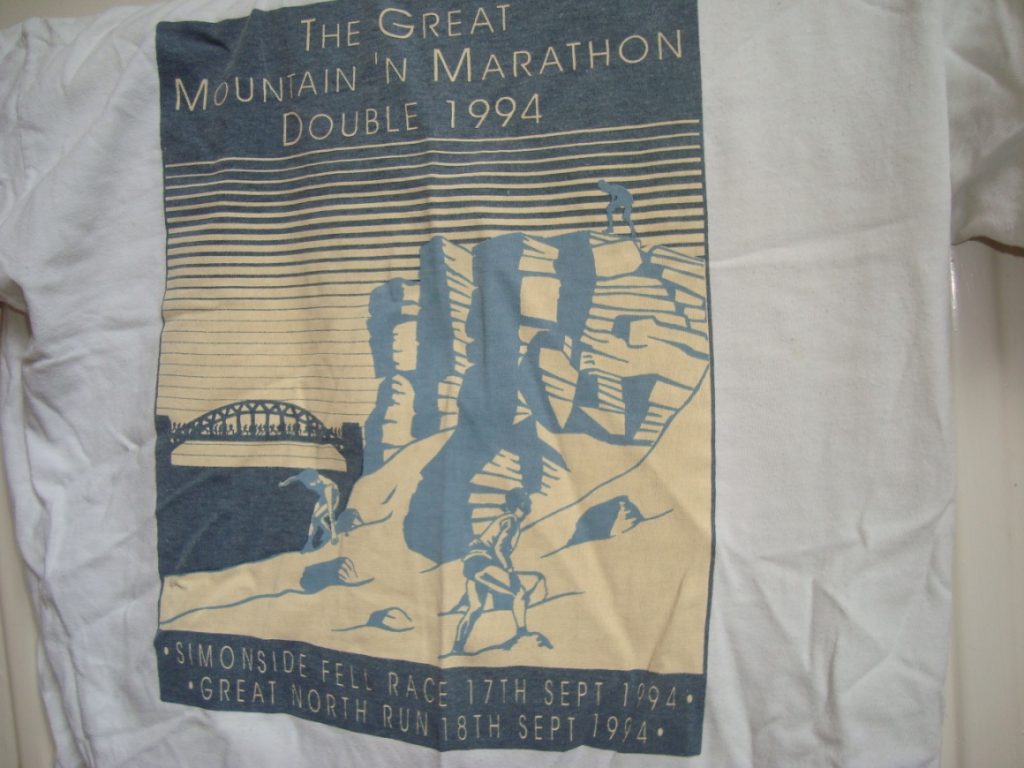 A group of Reading Roadrunners and our supporters (my mum and dad) went to Thropton Country Fair and some of us took part in the race.  Once the race left the village we were soon crossing a river, by running through it, then it was a steady climb.  At the top of Simonside, we scrambled over rocks before running back down, through the river again and into the show ground.  I was a little bit stiff for the GNR the next day, but as the race was always very crowded in my part of the field, there was never any chance of a PB, so it didn’t matter.  We got a special print on the back of our GNR T-shirts and I knew which race I enjoyed the most!

So after this I was on the look out for fell races, if possible within travelling distance of Reading!  I entered the Box Hill Fell Race in Surrey.  Driving there around the M25 it didn’t seem possible that there would be a fell racing landscape nearby, but suddenly the hill was there, rising steeply in front of us.  There is also a series of fell races in the Isle of Wight, which I took part in several years later.

It was a ‘proper’ fell race in the mountains of North Wales in 1998 which was the scene of my greatest fell racing glory; The Moelwyn Peaks Race.  I had been staying in Snowdonia for a week and I’d noticed that on the Saturday of my return home there was a race in Blaenau Ffestiniog, a 13 mile fell race.  It was soon after the other major highlight of my running career, it was the year I’d won the Compton 40 (first female), so no doubt I was feeling very confident.

I was feeling a little less confident after arriving at the race venue, explaining to the organisers that I was from Reading and I hadn’t done much fell running before, I asked them if I would be OK to run.  “Yes you’ll be fine,” I was assured as they pointed to three peaks clearly visible in a cloudless sky.  “See those three mountains there,” one man said, “It’s those three.”

It had snowed heavily during the week before and although the day was bright and sunny, and not too cold, there was plenty of snow on the ground as we climbed higher.  It was probably this combination of weather conditions that ensured my safety, or at least meant that I didn’t get lost.  The studded prints of a few dozen pairs of Walsh PBs are quite obvious in the snow.

I was at the back right from the beginning of the race, and I didn’t make up any ground at all.  But I didn’t make the same mistake as some runners who went up the wrong side of the first valley and were out of the race.  I was soon on my own, following footprints in the snow.  I did have a map and compass (and I do know how to use them), but I don’t think my brain would have been able to cope with that and trying to run up and down mountains at that time.  Approaching my second peak I had a strange experience; a woman was approaching from the other side and she recognised me.  “Hey, it’s Kathy,” she shouted, turning to a man who was walking a short distance behind her.  “What are you doing here?”  he demanded, “You’ve got a marathon next weekend!”  It was a senior engineer from work at Thames Water.  I was part of his London Marathon team raising money for WaterAid and he didn’t think a fell race was the best Marathon preparation, “You should be tapering!” he shouted.  I completed the London Marathon without any problems a week later.

There was a point where we came alongside a mountain road where there were marshals and drinks.  I asked them if I was last, and they confirmed that I was indeed last.  I them asked them if I was a long way behind everyone else, and they confirmed this too.  “Do you want me to retire?” I asked, almost hopefully.   “No, no, you carry on,” they were all very emphatic.  One of the marshals (an older man) accompanied me for a few hundred yards to make sure.  When I reached the road back in Blaenau Ffestiniog, the car with the marshals was returning and the same man got out and ran with me to the finish.

Although I was last by a very long way, they were all impressed by my performance; “coming from Reading an’ all!”  They said I deserved a trophy, and gave me ‘1st local veteran lady’ for which no finisher had qualified.  On hearing that I was driving back to Reading, the caretaker opened the showers especially for me.  I went into the local shop to buy some sweets for my journey home and I was greeted like a champion; “You’re the woman from Reading who’s just run the fell race!”  My fame had spread.