GEMMA BULEY was the big winner at the eighth round of the Reading Roadrunners’ club championship, the Wycombe 10k.

Gemma was first lady home at Adams Park and led our girls to take the team prize.

In doing so she moved up to 199 points and pretty much sewed up this year’s senior ladies title.

Gemma finished 22nd overall in 46 minutes 20 seconds, just 36 seconds and one place ahead of Katherine Sergeant, who also came first of the F40s. 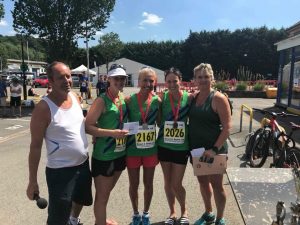 Paloma Crayford rounded off a day of success as the first F50 finisher.

Also among the age group winners was Alan Freer, who didn’t let a heavy fall stop him from collecting the M60 prize.

“It was a real pleasure to chase Alan round the course,” said Gemma, “although he gave me a fright when he fell over about 7k in. He was incredible descending on those hills and he jumped straight up, completing the course with blood trickling down his face and knees.

“I’m in absolute awe of him. He gave me a good run all the way round.”

Alan said: “I was only on the ground for about five seconds.” At the finish he still had well over three minutes in hand over his main F60 opposition, Marlow Striders captain Mike Thompson.

Alan had already made sure of the F60 championship but was still chasing points in the ‘all racers positioned by age grade’ title race.

Gemma was quick to praise her team-mates’ achievements. “I was so pleased for Mel Shaw contributing to winning the team prize as she says she never wins anything. She did so well in the heat.

“Katherine carried her water round, offering it to me out on the course. Such lovely team spirit as always in the Roadrunners.”

Gemma was also on hand to accept the second-place team prize for Roadrunners’ men as our four stars had already left the Wycombe Wanderers ground.

The successful foursome was Andrew Smith, Tom Peirson-Smith, Paul Kerr and, first home in his debut event in our colours, James Rennie.

Sixteen-year-old James was sixth to finish overall in a time of 42:14. Bearing in mind that almost everyone was about five minutes over par over a challenging trails course on a stinking hot day, that shows he is proving a very useful recruit.

Andrew Smith’s performance took him to 200 points and the guarantee of at least a share of the men’s V40 title.

Ninth overall, his team prize followed key roles in both the club’s recent relay triumphs on the Ridgeway and at Runnymede.

There are also new leaders in the M50 (David Fiddes) and M65 (Andy Atkinson) title races, as well as at senior level (Chris Buley). 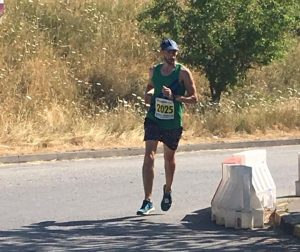 But Chris (left), hampered in this race by a knee injury, was not celebrating like his wife. He knows what  he has to do to take the title, but he has a sense of foreboding about what’s coming next.

“Rob Corney is running against me at the Englefield 10k,” he said. Good luck with that, Chris!

Englefield is on August 26th but the next round of the championship is the Burnham Beeches Half Marathon on August 12th.

That event is listed as a ‘road’ race…. but then so was the Wycombe 10k! Someone misinformed our excellent championship organiser….

*Standings after round eight are on the club championship page.