Had a good first day, picked up the race numbers at the race village. Very easy, nothing much going on there in particular, got a customary shot in a Roadrunners top, spotted our names on the entrants wall for a couple more selfies etc. Free T-shirt (in what are apparently Marseille colours) picked up. Looking at the mountains of Tee’s for 10km and half runners, a slight concern on the much smaller pile of shirts for Marathon runners. Noticed there was no proper course map in the bag, or race magazine, nor were there little country flags on the bibs as there is at some races.
Spent the day chilling out, didn’t end up sleeping in the day as per the original plan. Found a good Pasta place for the customary pre-race Pasta. 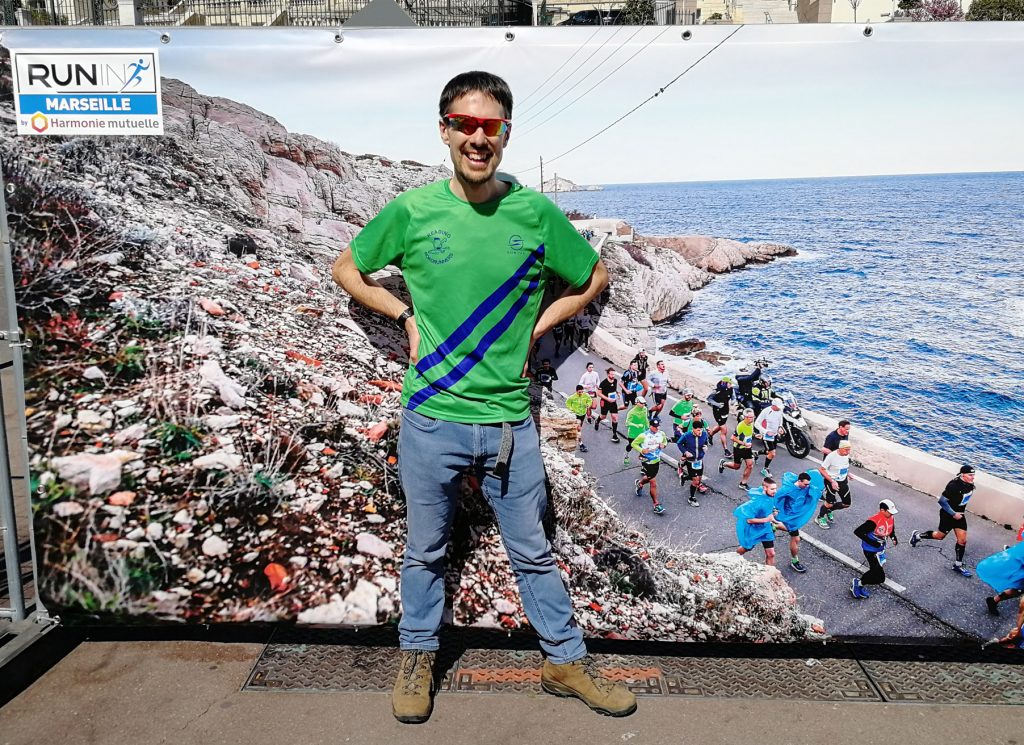 Back at the hotel for an early night, but then sadly woken up by our ‘Neighbours’ about 2AM. Managed to get back to sleep but it was hardly ideal prep.
Left the hotel a little later than planned and walked down to the start (this time we hadn’t ‘pre-walked’ the route). Arrived to find the organisers had provided a woefully inadequate number of loos (about 10 near the marathon and half start, and with the marathon, half & 10km about 13800 runners (!) Made it but meant we were a bit frazzled at the start, having just about navigated to the right start pen, the only directions given in very fast French (and again something that could be solved by printing it out before hand, as happens at many races.

For the race itself, I was looking for the 345 pacer, so we pushed through the pen to find him, only too later see he had moved back in the pen. Pen was a mixture of marathon runners and half marathon runners.

Off  we went, having the half runners with you for quite a bit of the route, making pacing harder and emphasising the need to ‘run your own race’. For myself things went largely according to plan, was happier when the half marathon runners split off; less happy with a park we had to run around with two big ‘out & backs’ in, and after that the two hills, both on the coast road.
Was running well then came back through the city for the 2nd Lap, at about 16 miles or so… Then there was a large group of apparent runners, hundreds of them high fiving me as I went through…(which gave me a lot of energy)..I had been thinking, that’s nice of the finishers to high five, then I noticed they were in a pen, and the 10km course car ahead!
The 10K runners were then chaotically released just behind us! This caused me and the few other marathoners around me quite a bit of trouble; first we had to move out of the way of the course car & motorbikes, with the quick runners for the 10km just behind. It was a real rhythm breaker, and a bizarre, and frankly idiotic way to organise a race, and caused us to need to run on the far left hand side, plus caused more pacing issues.
Just about recovered from that and then it was time for the marathoners to split off again, into the lovely park, with (somewhat confusingly) a different route to run it in (but including the two hated out and backs).

Was still feeling quite good on 20/21 miles as reasonably on target and a good 300 minutes ahead of the 345 pacemaker. Once we started the coast road, it was time to ‘merge’ with the masses from the 10km field. This caused no end of trouble, with some of them running back down the course the wrong way, stopping suddenly, fiddling with phones and getting in the way by stopping for selfies. Had my rhythm broken at least 4 or 5 times and had to keep running round people which was quite chaotic in the narrower bits (forced to jump into curbs, pavements, traffic Islands). Was struggling slightly but still overtaking the 10K runners when at about 25.2 miles I was eventually overtaken by the 345 pacer. This was slightly heartbreaking as I think I could easily have made that pace without the 10K runners  in the way; and he  went past in an area where an unnecessary course car basically forced me to stop, since I wouldn’t get round it in the narrow cobbled streets of the last mile. In addition to the 10kmers, one man at one point blocked the marathon route in his car and argued with a fellow runner (in French) then shouted at me, cyclists and scooter riders where someone on parts of the course (sometimes going the wrong way).

There was sadly more chaos at the finish as was still trying to pass people all the way to the line plus there was no way of immediately getting water.

A chaotic and badly organised queue for medals formed in the small finish area. I only got the finishers bag (which is quite nice tbf) because they happened to be getting a box out when I went past. Eventually I found the water, so took 3 bottles to make sure. Wasn’t feeling too smart at the end; possibly as a result of energy gels and/or too much water.

On the course, for a hot day (about 20 degrees by finish time) there was insufficient water for the marathoners (not too much of an issue personally as I was wearing my race pack).
Having said all that, I did manage to finished with an 8 minute PB though  would have been nice to hit 3.45. To be honest I’d been  aiming/hoping for 3.40 but it just wasn’t to be on the day.

I did really my time in Marseille. Hotel excellent, good food and  lots to do. Nearly 10 miles of the race where on the coast which was really nice, and the flights here a lot cheaper than the other marathons we were looking at. The bag, medal, and T-shirt are nice, you can stay near the start and Port Vieux is a really nice area, especially near the start zone.

I’d have to only give a 4 out of 10 for the race. Good marks for the pretty route. The day before was well organised, but not enough water stations plus the 10km started just behind us causing chaos during the route and at the finish  A shame because these things are easily fixed.