RUNNER-WRITER Andy Atkinson has recently reported from Roadrunners’ trips to races in Germany, Spain and the USA. “Wherefore art thou?” now, Andy? The answer is Italy for the Romeo and Juliet Half Marathon in the beautiful northern city of Verona. Here’s his dispatch… 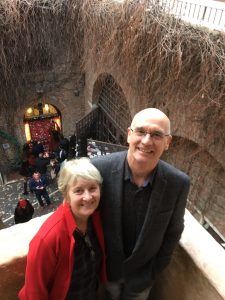 But for late winter and early spring, there is nothing to compare with Italy. Although sometimes variable, the climate is often ideal for running — cool, even cold, in the shade, with a bright blue sky overhead and enough heat in the sun to sip Chianti outside.

Thus it was when I arrived at Verona with my wife Liz to run the Guilietta and Romeo Half Marathon. Motives for the visit were mixed as romance was also very much in the air.

The Half is set over St Valentine’s weekend and the city was busy with tourists eager to live the Shakespearian dream.

The city authorities have embraced Shakespeare with gusto, turning fictional locations to reality and charging for admission accordingly. We took up the spirit of the weekend and queued with the rest for a go on Juliet’s balcony. (Above: the star-cross’d lovers).

We were doing the half with friend and fellow Roadrunner Fiona Ross, but went out a day earlier than her on the Thursday.

After an overnight stop at a Gatwick hotel, with two other Roadrunner friends, John and Lorraine Bailey (who also happened to be travelling to Verona, but on a skiing trip), we arrived in time for some sightseeing and food before sleep. 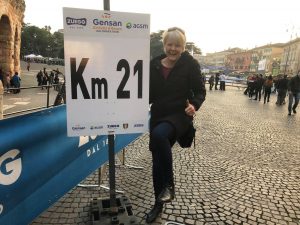 Fiona’s trip was not so smooth, if a little more adventurous. Italian air traffic control decided to strike on the Friday of her journey, delaying arrival by a day and making all subsequent flights doubly busy.

The best flight she could get was to Milan, with a train transfer to Verona. This, at least, gave her plenty of opportunities to practise her Italian, while we strove to minimise the delay by collecting her number at the expo.

The delay was compensated on Saturday evening by more speaking practice with Fiona’s Italian connections — her sister, Italian husband and two delightful children live near Padua and travelled over to meet us.

After some difficulty finding anywhere to eat on such a busy weekend, we settled down at a swish, but minimalist, restaurant. Liz, who is studying Italian, promptly dug out her homework and got both father and children to help her. I don’t know if you call that cheating or creative exploitation!

Interestingly, the race pasta party was AFTER the run and thus not much help to us on that evening.

The half marathon is one of three races run on the day — a ‘fun’ 5k, the half itself and the ‘duo’. The last is a relay designed to be run by couples, presumably keeping to the Romeo and Juliet theme. One half of the couple runs the first half of the race and the other takes over at halfway (which is back at the starting point as the course is a two-lapper).

This format conveniently keeps the couples apart except at the changeover — I suspect a very clever device to maintain harmony between lovers. Liz and I needed no separation and, more or less, stuck together from start to finish.

Fiona, restrained by no such fettering, sped onwards to a near five-minute personal best. We later commented that, if Romeo was in pursuit, he would not have caught her! 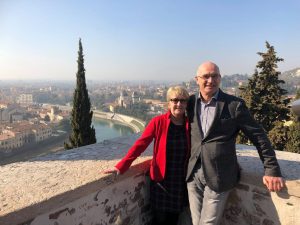 Overall, this is a very good race. It is flat and fairly fast, provided you can negotiate some uneven cobbled streets. It is not too big at about six thousand runners, most runners are Italian and of a good standard and it is well organised.

Spectator support is enthusiastic and positive, the route takes in the best sights of the city and weaves through interesting streets in the old town. The finishing line commentary is excellent and, after reaching the 21k-mark still in harmony, Liz and I were greeted with our own special announcement.

Verona is welcoming, well worth a visit and forms a beautiful backdrop to lively races.