SOMETIMES we struggle to get reports from Roadrunners events. This week we are privileged to have TWO from the same meeting, with Sam Whalley and Colin Cottell doing the honours. Here’s the contribution from ladies’ captain Sam…

ANYONE who had seen the weather forecast for Bournemouth midweek might have been put off attending the first Hampshire League cross-county fixture of the season. But then again, it would have been proper XC weather. Unlike what it actually turned out to be – very mild and quite sunny.

The Bournemouth fixture is the furthest away, and it can be difficult to persuade enough people to travel, particularly with rumoured travel disruption just outside of the town.

Imagine my delight when nine women and nine men turned up – a bit of a difference to the respective three and seven we had seen a year ago; the word is spreading. 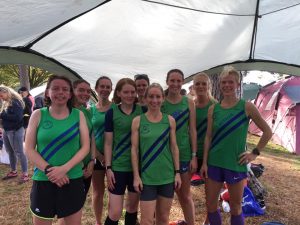 First of our women back was Chantal Percival, with a placing of 15th, the highest we have seen in the club for some time, and a position that earned her an offer to run for Hampshire in the Inter-Counties XC champs, had she been eligible.

Hopefully we will see Chantal (second from right in our team line-up) receive a similar offer in the Berkshire XC champs at the end of the year.

Making up the overall scoring team were Gemma Buley (47) and Bithja Jones (49), the latter running her first XC race for the club. Afterwards, Bithja said: “I hated it from km 3 to km 5, and now I feel like I loved it.” Yep. Sounds about right.

Sarah Dooley (73rd) and Nicole Rickett (137th) were our other vets to score, Nicole feeling like she had run her best given her recent holiday and busy work schedule, which involves shoe-horning in runs whenever she can.

Travelling by train with her Southampton University Athletics Club team-mates was Katie Rennie, making her debut in the Hampshire League, and giving us our first Under 20 runner in the team, at least in recent years.

Next was Claire Seymour, still basking in the glow of her Chester Marathon PB last week, albeit on tired legs, followed by Nicky Chadwick, who, like me, was inspired to run XC by a daughter who needed ferrying to the fixtures. The team was completed by Alix Eyles, making a return to racing.

I was delighted with the performances of all of the teams and hope this level of popularity continues throughout the season.

And here are the words of wisdom from Colin…

LONG gone are the days when Reading Roadrunners were represented by one man and his dog (well, actually, there was no dog) at the annual Hants Cross-Country League fixture in King’s Park, Bournemouth.  It was more a case of ‘we do love to be beside the seaside’ as the green vests descended on the south coast, if not exactly in their hordes, but in sizeable numbers.

The 70-mile journey proved to be time well spent as the green vests turned in a host of top performances.  We were up against some of the premier running clubs in the country, notably Aldershot, Farnham and District, never mind in Hampshire, and at the end of an afternoon of high-class racing,  Roadrunners’ veterans stood proudly at the top of the vets’ league and in seventh position in the first division. 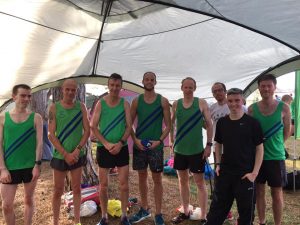 Meanwhile, our ladies, who had raced earlier in the afternoon in bright and unseasonably warm conditions, were in eighth position in their league, and sixth in the veterans’ table.

In what is an inexperienced women’s team at this level of competition, pride of place must go to Chantal Percival.  Continuing her rich vein of form after her 1.27 half marathon the week before, and in her very first Hants League event, she ran a storming race.

As high as 11th place at one stage, she faded only slightly on the last lap to come in 15th, but still well ahead of athletes of the calibre of W45 England international Kath Bailey.

The results for all our women can be found here: https://www.hampshireathletics.org.uk/results/2018/20181013_hlwomen.htm

I am afraid I haven’t very much to say about the men. I was running, and by the time I had finished they were all on their second cup of tea. Suffice it to say they performed to the same high standard to which we have recently grown accustomed, Mark Apsey having a great race, Andy Mutton also going well and Chris Buley making a top debut.

I did hear Mark Worringham complaining that he was 15 seconds down on last year, and that he wasn’t feeling 100 per cent, but I will take that with a pinch of sea salt given that he came in first V40, with Lance Nortcliff second.

With Andrew Smith and Pete Jewell giving great support, all I can say is Lord help all the other teams, when our vets gets all their ducks in a row.

Full results for the men are at https://www.hampshireathletics.org.uk/results/2018/20181013_hlmen.html

I won’t trouble you with my own travails, except to say that it if had been a cricket match, the phrase ‘he didn’t trouble the scorers’ would have been appropriate.

I can at least say that I continued my proud tradition in recent years of being the last male green vest to cross the line, although on this occasion I was only a whisker away from pipping Stuart Jones, another excellent debutant, to the post.

I tried a new tactic of trying to pace myself using my TomTom – I usually don’t switch it on at all for cross-country –  but found that after starting at 3.55 per km pace, and feeling easy, this dropped away steadily, until that final mad and ultimately futile dash to the line.

The next Hants League fixture is on Saturday, November 10th, at Wellesley Woodlands, Aldershot.